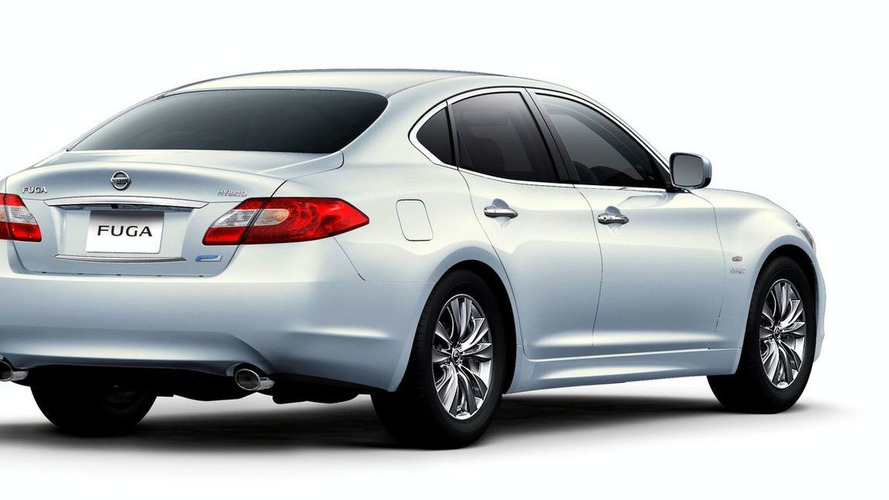 Nissan is releasing early details about the Nissan Fuga, the Japanese market's Infiniti M. Read all the info inside

The Nissan Fuga will get its formal introduction in Tokyo, according to the automaker.  The company will unveil three different powertrain options, including 2.5- and 3.7-liter V6 engines.  A parallel hybrid will be shown off with a 3.5-liter V6 and an as-yet unannounced electric motor, said to have "the fuel consumption of a compact C-segment car."

If the car looks familiar to you, that's because the North American version was already introduced.  The Infiniti M was shown off virtually this past summer in California at the Pebble Beach Concours d'Elegance.

The Infiniti model shares the same 328 hp 3.7-liter engine, but the other two units will remain distinctly Nissan.

Nissan's unit comes with the recently created "Double Piston Shock Absorbers," which increases oil flow internally when necessary to dampen the effects of road bumps and grooved pavement.  It also comes with an Intelligent Transport System paired to the navigation to inform the driver of upcoming road hazards.

It comes with a few other nice touches, like 20-inch wheels, and soft-leather seats.  The intelligent HVAC controls not only temperature and fan power, but also humidity.  It is also able to detect and supress odors.

Japanese sales of the Nissan Fuga will begin in the next few months, with the Fuga Hybrid coming out in a year.  The Infiniti M goes on sale Stateside in Spring 2010.