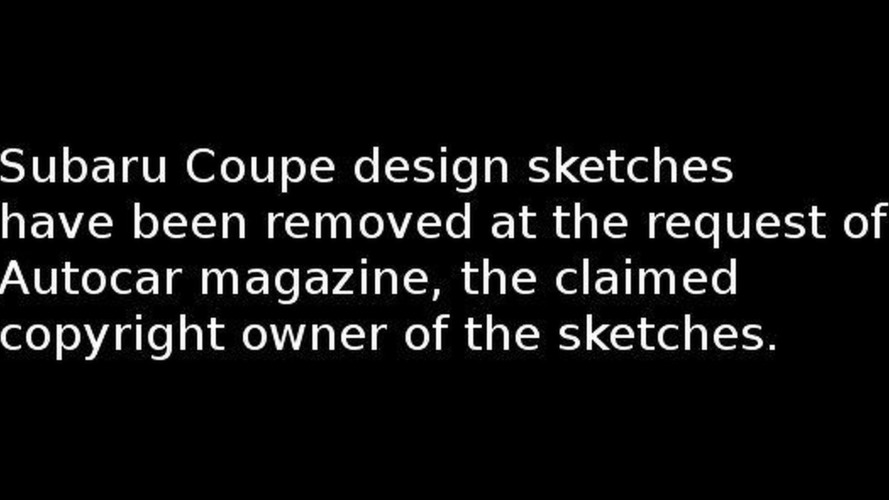 Photos leaked out from Subaru show the company's ideas for a car co-developed with Toyota. But will the rear-wheel-drive coupe make it to market?

[UPDATE 10.08.2009]  Subaru Coupe design sketches have been removed at the request of Autocar magazine, the claimed copyright owner of the sketches. Autocar originally reported, "these sketches are from inside Subaru" leading WCF to believe and report that the images were genuine. WCF apologizes to its readers.

Several sketches have leaked out featuring the Subaru-branded version of a coupe co-developed with Toyota.  Although supposedly not yet green-lit by Subaru, the car is continuing to push forward as a Toyota.

Toyota will debut their FT-86 concept at the Tokyo Motor Show later this month.  Details of the concept were sent out in a release earlier this week, with Toyota confirming the vehicle's use of the Subaru 2.0-liter Boxer engine.  The engine could be tuned as high as 200 hp, a 25% increase over its normal output.

The Subaru sketches show a car that looks near-identical to the photos released by Toyota.  The differences between the vehicles are more or less cosmetic.  Subaru's vehicle has a third brake-light built into the spoiler.  Tailpipes appear to be hidden as well, while side mirrors have been left off altogether.

However, the rumor-mill is suggesting that Subaru is grappling with the decision to push forward with a self-branded version of the car.  The company has carved out a niche for themselves in the auto industry for providing all-wheel-drive vehicles.  Meanwhile, the coupe under development is believed to be rear-wheel-drive for both auto makers.

The benefit of building the car is that Subaru will have the opportunity to freshen their image.  With sales of the Outback, Tribeca, and Impreza flagging, a sporty coupe may be exactly what the company needs.  Subaru was one of the few auto makers to come out of last year's industry-wide tailspin in decent shape.  The automaker will be looking to build momentum into 2010 and 2011.