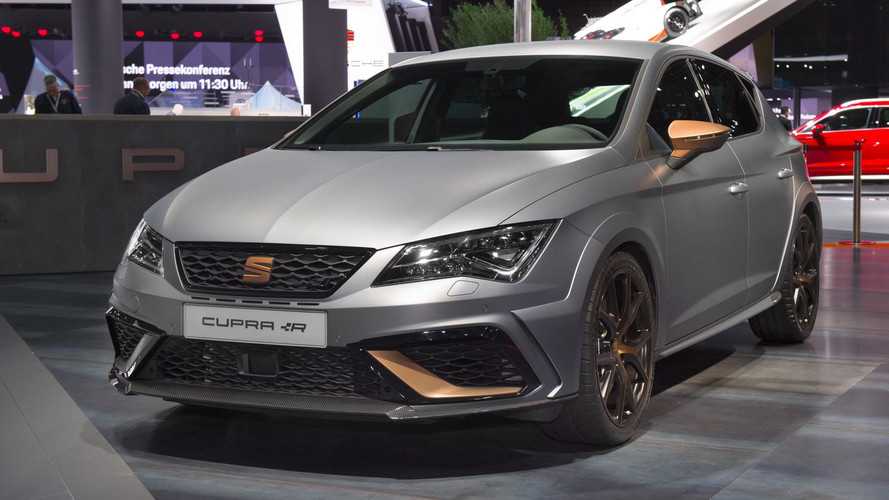 The front-wheel-drive VW Golf R from Spain is here.

If you are a fan of SEAT’s fastest and most powerful road-going car to date, you’d better act fast as it won’t be a regular production model. Instead, Sociedad Española de Automóviles de Turismo has decided to keep its hottest of the hatches exclusive by manufacturing just 799 cars. To please both worlds, it’s going to be available with a six-speed manual gearbox offered as standard and with an optional seven-speed, dual-clutch automatic that will cost you extra.

Unlike the closely related VW Golf R and its 4Motion setup, the new flagship Leon Cupra R will be sold strictly as a front-wheel-drive car. Its turbocharged four-cylinder 2.0 TSI engine will be available in two states of tune, depending on transmission choice. The manual gets a Golf R-matching 310 horsepower whereas the DSG-equipped version has to make do with 10 hp less.

There won’t be a lot of exterior colors to choose from as SEAT will sell its most exclusive car ever with either a Pyrenees Grey or a Midnight Black shades available at no extra cost. For those willing to spend more to stand out furthermore, a Leon Cupra R-exclusive Matte Grey paint will be available.

To make it worth your hard-earned money, SEAT will also throw in upgraded Brembo brakes, a revised adaptive suspension, and a new exhaust system to make the most out of the engine’s soundtrack. It’s also going to look a bit meaner than the non-R Leon Cupra thanks to carbon fiber accents applied onto the front and rear spoilers, side skirts, and on the rear diffuser.

To sweeten the pot, copper details on the side mirrors, wheels, badges, and on the enlarged air vents up front have been added as well and these continue on the inside where the steering wheel and gear level come wrapped in Alcantara.

SEAT will begin to take orders for the Leon Cupra R towards the end of the year. Pricing details have not been announced, but it’s safe to say this will be the company’s most expensive car in history.