Ferrari 488 Spider 'Heartthrob' Lives Up To Its Name 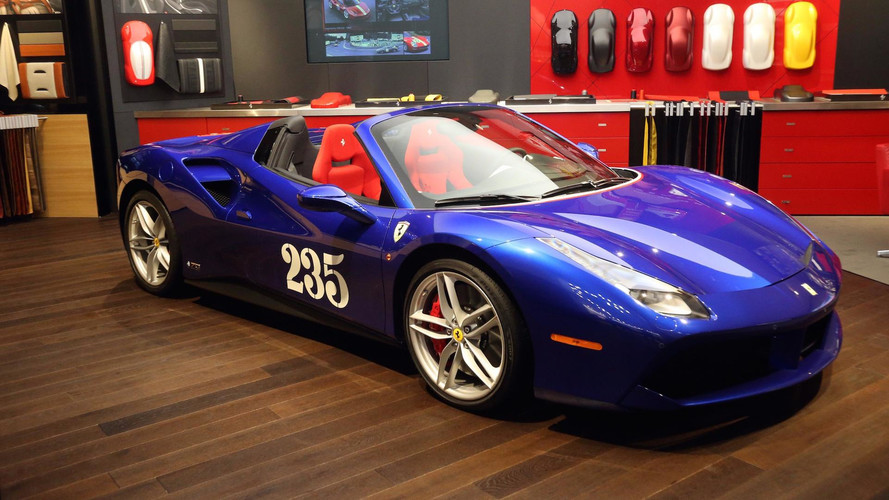 The tailor made supercar made its debut at the Geneva Motor Show.

At the Frankfurt Motor Show, alongside the stunning new Portofino, Ferrari quietly unveiled the latest livery in its 70th anniversary special edition series. Once again the Ferrari 488 Spider is the subject of discussion, this time it comes finished in a handsome royal blue exterior.

There's a hotter 488 about to break cover:

Aptly given the nickname "Heartthrob," the 488 Spider special edition was first announced in 2016 at the Paris Motor Show, and pays homage to the 1954 500 Mondial designed by Pininfarina. The 500 Mondial in question was one of only 14 open-top models of the series built by Pininfarina, and was owned by legendary Dominican playboy and gentleman racer Porfirio Rubirosa.

Rubirosa drove the Ferrari in just one international race at Santa Barbara in 1954, where he took home an eighth place finish overall and a second place finish in his class. The 488 Spider pictured here wears the same blue exterior found on the original race car, with the number 235 emblazoned on the door panels, and a red leather interior.

Though the supercar gains plenty in the way of visual upgrades, the factory performance specs go unchanged…. not that they need an upgrade anyways. The 488 Spider produces a healthy 661 horsepower (493 kilowatts) and 561 pound-feet (761 Newton-meters) of torque courtesy of a 3.9-liter V8. That allows it to sprint to 60 miles per hour (96 kilometers per hour) in just 3.0 seconds, and continue on to a top speed of 205 mph (329 kmh).

Similar to the 488 Spider "Green Jewel" before it, Ferrari is likely to auction off this one-of-a-kind convertible in the near future. Though the Italian supercar maker doesn’t list a price, the aforementioned 488 "Green Jewel" went home for a whopping €1.09 million ($1.3 million) at this past weekend’s RM Sotheby’s Leggenda e Passione sale.