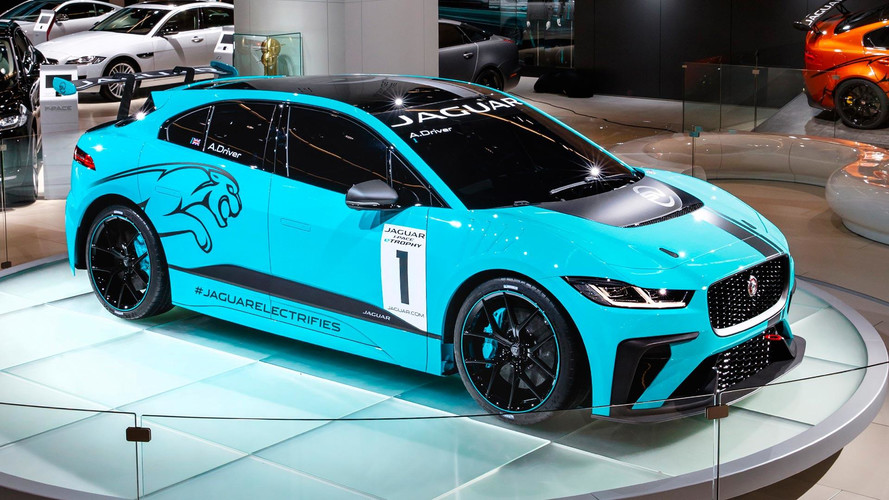 Jaguar will launch a one-make racing series for the I-Pace in late 2018 that will put the electric crossovers on track as a support series for the Formula E Championship. The British brand will run the I-Pace eTrophy events on an arrive-and-drive basis, so competitors will be able to show up without worrying about issues like shipping the electric CUVs between tracks or other technical support.

The I-Pace eTrophy will hold 10 events during its inaugural season, which will include the Formula E races in Hong Kong, Paris, Rome, New York and Sao Paolo. Each one will put 20 racers on track, including a VIP driver. According to Jaguar, each race will be 30 minutes long, plus practice and qualifying sessions.

Jaguar Land Rover Special Vehicle Operations will handle building the I-Pace racers, but the firm won’t release technical changes about them yet. Judging by the company’s renderings, the tweaks will likely include a much lower ride height, more aggressive bodywork, fixed rear wing, and a diffuser. Inside, changes like a stripped interior and roll cage seem very likely.

In production guise, the I-Pace will have a total of 395 horsepower (294 kilowatts) and 516 pound-feet (699 Newton-meters) from two electric motors – one at each axle. It’ll let the vehicle reach 60 miles per hour (96 kilometers per hour) in around 4 seconds. A 90-kilowatt-hour battery will allow for over 310 miles (500 kilometers) of range on a charge in the New European Driving Cycle evaluation.

Jaguar will begin I-Pace deliveries in Europe before the end of 2017, and they’ll come to the United States in 2018. Pricing will reportedly be around $70,000.

Just before the opening of the Frankfurt Motor Show, Jaguar Land Rover announced that it would offer an electrified version of every model in the lineup starting in 2020. These will include pure EVs, plug-in hybrids, and mild hybrid powertrains.

·      ‘Arrive and Drive’ package offered for up to 20 drivers at each race, including a different VIP Driver at every venue

·      Jaguar the first premium manufacturer to join FIA Formula E Championship in 2016, ahead of competitors Mercedes-Benz, BMW and Porsche

The Jaguar I-PACE eTROPHY will be the support series for the FIA Formula E Championship, taking place on the same weekends at the same city circuits, starting in late 2018.

Exclusively featuring Jaguar I-PACE eTROPHY racecars, the new all-electric series gives racers of the future a chance to showcase their talent, competing on the world stage in zero-emissions motorsport.

The groundbreaking championship will support the launch of the Jaguar I-PACE – Jaguar’s highly innovative five-seat battery electric sports car which hits the road in the same year.

Up to 20 electric I-PACE racecars will be on the grid in the centre of 10 races in global cities such as Hong Kong, Paris, Sao Paolo and New York, giving future FIA Formula E Championship stars the chance to race in the world-first series.

The announcement follows news that the British government is to ban the sale of petrol and diesel cars from 2040 and reinforces Jaguar Land Rover’s commitment to electrification – from 2020 all new model lines will be electrified, with either hybrid or battery technology.

Jaguar Land Rover Special Vehicle Operations (SVO) in Warwickshire, UK, will build the racecars. They will be based on Jaguar’s first battery electric vehicle, the I-PACE performance SUV, which will hit the streets in late 2018.

Gerd Mäuser, Chairman, Jaguar Racing, said: “Jaguar returned to racing in 2016 with the mission ‘Race to Innovate’. With the launch of the Jaguar
I-PACE eTROPHY we have strengthened our commitment to battery electric vehicles, international motorsport and FIA Formula E Championship. As a British team, we are proud to announce today the launch of the world’s first production battery electric vehicle championship.”

“We’ve always said we want to prove our electrification technologies on the track – this is the proof. I am looking forward to seeing a full grid of Jaguar I-PACE racecars in late 2018, soon after the first Jaguar I-PACE hits the road in Europe. Ultimately this innovative series will enhance the technology in our future electric vehicles and benefit our customers.

“FIA Formula E Championship has grown exponentially since we joined as the first premium manufacturer last year, with commitments from Audi, Mercedes-Benz and Porsche. The Jaguar I-PACE eTROPHY will improve the spectacle for the fans and gives young drivers a ladder into FIA Formula E Championship. We expect our series to be a sell-out and an exciting international sporting event.”

Alejandro Agag, Founder and CEO of FIA Formula E Championship, said: “Jaguar has been a welcome addition to FIA Formula E Championship and a fantastic advocate for electric street racing. I’m delighted that in addition to the Panasonic Jaguar Racing team competing on the FIA Formula E Championship grid, we will be adding to our race day schedule with a competitive new support series for season five. The Jaguar I-PACE eTROPHY will bring more entertainment for fans in-between sessions and will be a further testament to the advances in battery technology and exciting electric performance. I hope Jaguar will allow me to bring my race suit and helmet... and maybe get behind the wheel myself!"

Technical specifications, race calendar and costs for the Jaguar I-PACE eTROPHY will be released in 2018.

Demand is anticipated to be high and places will be awarded on a first come, first served basis from entrants and drivers holding the relevant international race licence.

Jaguar Racing is offering a complete ‘Arrive and Drive’ packages in the
I-PACE eTROPHY that includes:

·      All global logistics for vehicles, spare parts and equipment

·      All garaging infrastructure at race weekends

·      Championship race wear for each driver

A typical race weekend will include free practice and qualifying sessions followed by a 30-minute race.