Toyota Yaris GRMN Is Quicker Than A Fiesta ST 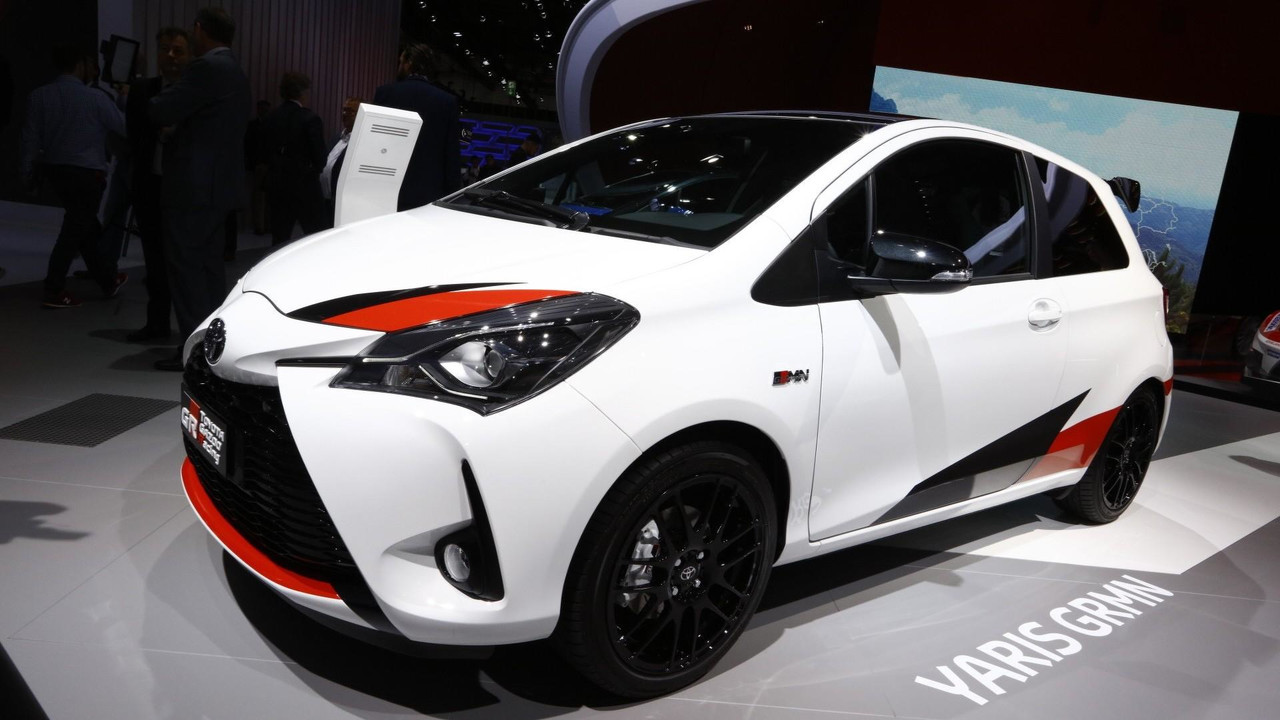 Toyota may have shown us the Yaris GRMN earlier this year at the 2017 Geneva Motor Show, but until now we didn’t know just how much performance the three-door hot hatch would offer. Now the figures are out: 0 to 62 miles per hour (100 kilometers per hour) in 6.3 seconds and a limited top speed of 143 mph (230 km/h).

That acceleration time bests the new Ford Fiesta ST (6.7 seconds to 62), thanks in part to the GRMN’s low curb weight of 2,502 pounds (1,135 kilograms). Also aiding that brisk time: A supercharged 1.8-liter inline-four engine with 209 horsepower (156 kilowatts) and 184 pound-feet (250 Newton-meters) of torque). Toyota builds the engine, dubbed 2ZR-FE, in the U.K., and notes that squeezing the supercharger into the Yaris’s teensy engine bay was a challenge in terms of packaging. The engine also gets a fuel system with parts from Toyota’s V6 engine family.

A six-speed manual transmission sends power to a Torsen limited-slip differential, all the better to actually get that power to the road.

As was detailed before, Toyota development the road-going Yaris GRMN based on the Yaris WRC rally car., and put together a special team (in cooperating with racing partners Gazoo Racing) to tune and develop the hatchback at the company’s facility near the Nürburgring. As the company’s press releases promises, “Toyota’s belief is that if the car can prove its capabilities in this environment, it can do so anywhere.”

There’s far more done to the Yaris than just a power boost. There’s extra chassis bracing, including for the front and rear suspension; the car rides 0.9 inch (24 millimeters) lower than stock on new springs and Sachs shock absorbers, with an enlarged front anti-roll bar. The front brakes used 10.8-inch rotors with four-piston calipers, with white-painted calipers. Seventeen-inch BBS wheels not only look cool, but also save weight and are necessary to fit those upgraded brakes. Bridgestone Potenza RE050 rubber affixes the GRMN to the road.

Other tweaks include a modified sports exhaust for what Toyota claims is a “rousing” note, the leather-wrapped steering wheel pinched from the Toyota 86 sports car, and various exterior visual bits like a rear wing and diffuser.

As was announced before, the Toyota Yaris GRMN will be limited to just 400 units, all three-door models like the one shown here. Spy photos do, however, suggest a five-door variant might be on the way at some point down the road.

The car goes into production at Toyota’s plant in Valenciennes, France, this fall. Each model will be built under the supervision of the factory’s “most skilled members” and will receive a special test drive after it’s built to ensure everything is up to par. Pricing in Europe begins at €29,900 before taxes, equivalent to about $35,700.

Given that Toyota has underlined multiple times that the GRMN was tested on the Nürburgring, however, the figure we’re waiting for above all is a lap time around the Green Hell. Only time will tell whether Toyota chooses to disclose that number.

The Yaris GRMN is inspired and influenced by the Yaris WRC, the car with which Toyota has returned to the FIA World Rally Championship, with event-winning success. Its performance focus is broadcast by its lightweight 17-inch BBS alloy wheels, larger brakes, central oval tailpipe and a bespoke exterior finish that displays Toyota Gazoo Racing’s white, black and red competition colours. Under the bonnet is a 1.8-litre engine, tuned to produce 212 DIN hp and benefiting from a supercharger, a feature unique among B-segment performance hatchbacks.

Development at the Nürburgring

Right from the completion of the first Yaris GRMN concept in 2015, a prototype was sent to a Toyota facility close to the legendary Nürburgring race circuit in Germany. Here a select group of Toyota tuning specialists from Europe and Japan have honed the car’s handling and performance, working both on track on the famous Nordschleife and on the wide variety of roads found in the immediate neighbourhood – from ultra-fast Autobahns to tightly winding mountain routes. Toyota’s belief is that if the car can prove its capabilities in this environment, it can do so anywhere.

The name GRMN itself declares the special efforts that have been invested in the car, standing for Gazoo Racing tuned by the Meister of the Nürburgring. The team working on the car have developed their skills through participation in motor sport, working side-by-side with racing professionals, and through sports car development programmes. They have also been able to draw on the experience gained by Toyota Gazoo Racing from competing at the circuit.

Even since the car’s show debut in Geneva, work has continued to define the optimum shape of strategic areas of the bodywork. Every part has been painstakingly reconfirmed so that the Yaris GRMN is in perfect trim for the start of production at Toyota Motor Manufacturing France’s Valenciennes plant this autumn. Production will be supervised by a team of TMMF’s most skilled members and each car will undergo a special quality control check, including a specific test drive.

The heart of the Yaris GRMN is its 1,798 cm3 four-cylinder engine, a 16-valve unit equipped with a Magnusson Eaton supercharger and Dual VVT-i intelligent variable timing for both inlet and exhaust valves. The 2ZR-FE unit is built by Toyota Manufacturing UK and has been specially adapted for use with the smaller Yaris platform.

Installing the supercharger presented a particular challenge, as only very limited space was available in the Yaris GRMN’s engine compartment. The packaging solution combines the supercharger, cooling and air intake together in a single, space-saving stacked unit. Cooling is crucial, so there is an intercooler for the supercharger and an oil cooler, both located in front of the radiator, and an enlarged air intake to support better engine breathing. The fuel system has also been upgraded, using components from a V6 engine.

With kerb weight kept down to just 1,135 kg, the Yaris GRMN achieves the best power-to-weight ratio in its class at 5.35 kg per 1 hp.

To ensure the Yaris GRMN’s power is transferred smoothly to the road, the car is equipped with a Torsen limited-slip differential. Chassis stiffness is enhanced with a lateral bar across the engine bay, between the front suspension towers, with further front and rear chassis underbody bracing.

Shorter springs allow the car to hug the ground more closely (24 mm lower than the standard Yaris) and these are teamed with dedicated performance shock absorbers, developed with Sachs, and a larger diameter (26 mm) front anti-roll bar. The suspension is a development of the Yaris’ front MacPherson strut and rear torsion beam design.

To achieve razor-sharp braking controllability, the 275 mm-diameter grooved front disc brakes are fitted with four-piston callipers; 278 mm discs are featured at the rear. The callipers are a stand-out feature, painted in signature Toyota Gazoo Racing white and visible through the slim spokes of the alloy wheels.

The wheels are 17-inch BBS lightweight multi-spoke alloys which not only save weight but also provide sufficient space for larger brakes to be used. Fitted with Bridgestone Potenza RE050 205/45R17 tyres, they also contribute to the Yaris GRMN’s very precise steering feel.

The exhaust has been fully reworked, a task that had to be achieved within very tight space limitations, and with careful attention to underbody heat management. The goals were to reduce exhaust back pressure and control emissions and noise levels. Success in this task has enhanced engine power and produced a rousing exhaust note. The design has also helped reduce the car’s overall weight.

It also sports a special paint finish – white with red and black flash detailing on the bonnet and sills, echoing the livery of the Toyota Yaris WRC, and a black roof with a unique-in-segment black shark fin antenna. The front lip is picked out in red and the LED headlights are given extra visual impact with the addition of a black upper ornamentation.

The cabin is equally an expression of the car’s performance focus, with front sports seats designed specifically for the car by Toyota Boshoku, providing best-in-class body holding and support.

The authentic performance details include an engine start button and a small-diameter, leather-wrapped steering wheel, sourced from the Toyota GT86 coupe and further adapted to suit the special requirements of the Yaris GRMN. There is also an aluminium sports pedal set, aluminium trim detailing and a bespoke, high-grade combimeter with TFT display, designed to reflect the car’s special performance character.

Just 400 Yaris GRMN will be available to European customers, including both right and left-hand drive models. The price is €29,900, with market variations for taxes and other local factors.