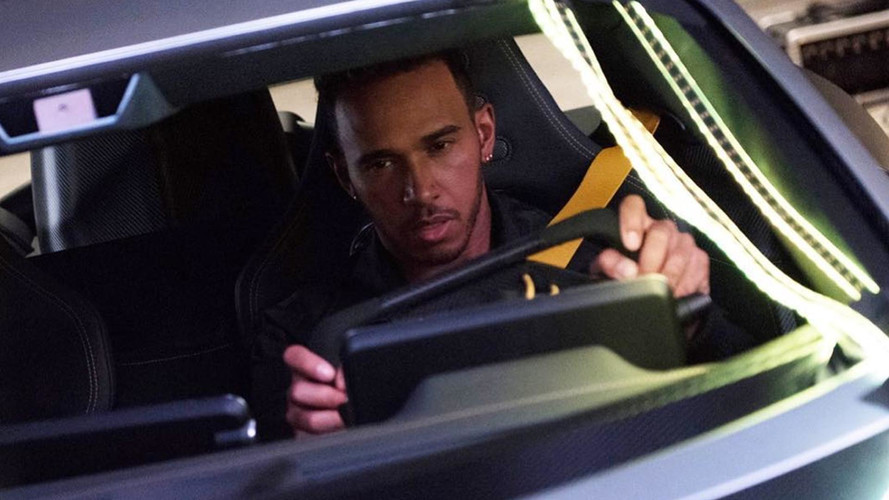 Update: New images have been published, but not by Mercedes.

F1 champion, Lewis Hamilton, sits behind the wheel of the Project One in what may very well be the final teaser ahead of tonight's full reveal. At the end of the article, you can check out the wheel and its carbon fiber construction.

The pieces of the puzzle are starting to add up as Mercedes-AMG has published a new teaser image revealing in full the rear end of its hotly anticipated F1-engined Project One. The hypercar was photographed while being loaded for transport to the Frankfurt Motor Show where the near-production hybrid beast will receive its world premiere on September 12.

Billed as being “the most ambitious project the performance and sports car the brand has ever planned”, Project One will be the perfect way to celebrate 50 years of AMG. This new teaser image allows us to see the carbon fiber roof scoop and large central exhaust that looks pretty much like a cannon. Extremely wide rear fenders and slender LED taillights lend the F1 car for the road a menacing look, while the cooling slats and central fin guarantee it will be one of the main stars at IAA next week.

Mercedes-AMG reiterates Project One will utilize a hybrid powertrain adapted from Formula 1, specifically a turbocharged 1.6-liter V6 engine. It will be an all-wheel-drive hypercar thanks to an electrified front axle, with combined output already confirmed to surpass 1,000 horsepower. We also know for sure it will top out at more than 218 mph (350 kph).

Only 275 cars will ever be made and all of them have already been pre-sold, obviously. It is believed Mercedes-AMG will make just one car per day and is going to end deliveries by late 2020. It may look like a car destined to be restricted to the track, but rumor has it Project One will be street-legal all over the world, with the exception of China.

Also in Frankfurt, the flagship AMG will be joined on stage by a wide variety of other new Mercedes models. From the Concept EQ A and S-Class Coupe & Cabriolet facelifts to the GLC F-Cell and X-Class, the company’s stand at IAA is going to be quite busy, though most eyes are going to be on this.