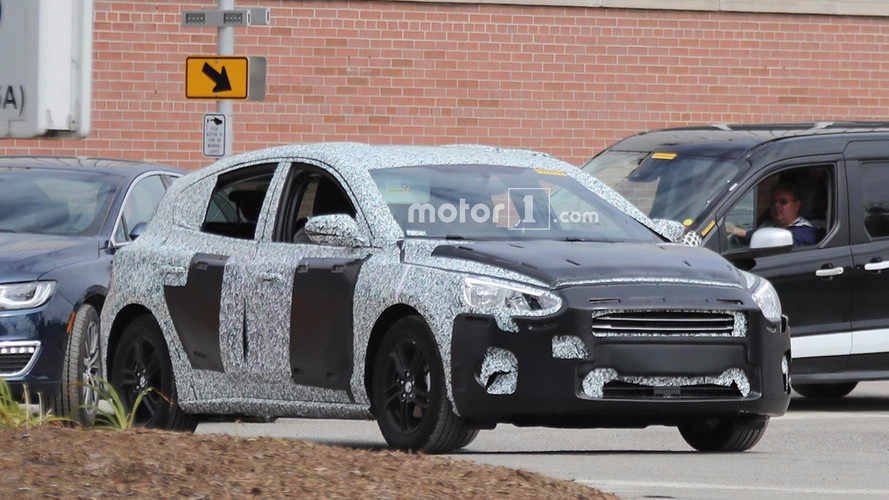 The biggest design changes appear to be at the rear.

Ford continues its global development of the new Focus, and a new batch of spy photos reveals the five-door hatchback testing in Michigan. This one appears to have production headlights and taillights.

The new Focus rides on a larger platform, which should allow for a roomy cabin. However, the Blue Oval’s designers appear to take an evolutionary approach when it comes to updating the model’s looks. The vehicle retains a rounded nose, but new headlights with LED running lights along the top look quite modern.

The new Focus’ profile makes the extra length most evident, but it largely keeps the existing model’s design. The biggest changes are at the rear where there’s a more upright hatchback and curvy C-pillar. With the camouflage and cladding in place, the update looks less sleek than the current Focus, but it’s best to reserve forming an opinion until the production version’s debut.

The tail of this test mule features an angular pair of taillights. The simple look is a major upgrade over the amorphous shape on the current model.

Previous spy shots provide an early look at the cabin. An upgraded infotainment system sits at the top of the center stack, and a head-up display would likely be available. Customers might also be able to order a digital instrument cluster. Front-mounted sensors suggest advanced safety assistance tech on board, too.

The new Focus would reportedly switch to a fully turbocharged powertrain lineup in the United States. An upgraded version of Ford’s 1.0-liter EcoBoost might be at the bottom of the lineup.

The next Focus will debut in 2018 for the 2019 model year. The hatchback likely arrives first, but spy photos show that a sedan and wagon are on the way, too. A replacement for the mildly hot ST should arrive eventually. There are no details about a Focus RS successor yet.