Barrier Crash Test Compilation Is A Brutal Lesson In Physics 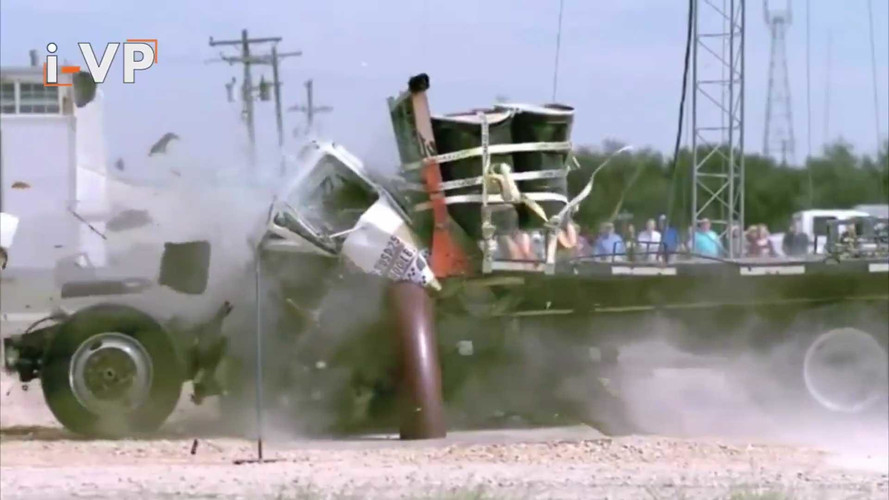 These big trucks get obliterated by small objects.

Are you ready for a shocking display of physics? It’s not that we haven’t seen crash test footage before, but what’s really amazing about this video is that some of these fixed objects are surprisingly small, yet they can inflict an astonishing amount of damage on vehicles most people think of as nearly indestructible themselves. Here’s the full compilation as posted by C-VP on Facebook.

We don’t have any context for this compilation, save for that it features a series of box trucks, or city trucks as some call them. Much of the footage seems to originate with MIRA, a crash testing laboratory based in the United Kingdom that has an 840-acre estate for conducting all kinds of tests. The focus here is obviously on barrier impacts, and though we’re all aware of the damage that can occur with crashes against such small objects, the sheer scale of the carnage doesn’t really register until you see it.

Right away we're shown a small cabover truck gutted underneath by a steel pole that appears to be just three feet up from the ground. The force of that impact literally rips the cab from the body, but that pales in comparison to the crash we see at the 1:30 mark. The barrier is wider and the speed looks to be faster, and the result is a cab that doesn’t just separate from the chassis, but literally shoots through the air a good 10 – 15 feet before slamming roof-first into the ground. Ouch doesn't even begin to cover it.

Conventional cabs also get a thorough thrashing, with an International truck completely bisected by a horizontal pole 30 seconds into the video. Perhaps the most shocking footage comes towards the end at roughly three minutes, where another cabover truck is positively annihilated by a small, curved steel pole sticking a few feet up from the ground.

The moral of the story here? Just because something is small doesn’t mean it can’t do serious damage. That, and we don't think we'll ever ride in one of these trucks again.