Caterham Seven SuperSprint Is An Ode To The Original Lotus Seven 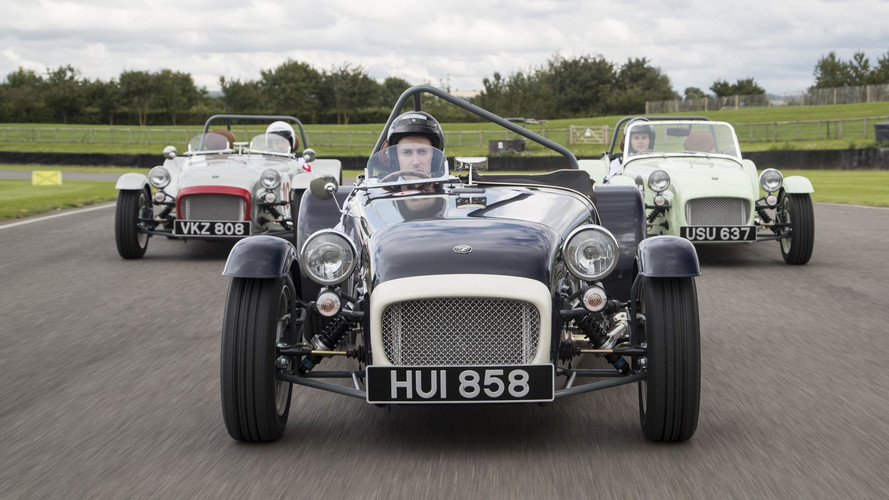 How to have fun with only 95 horsepower, the Caterham way.

60 years ago, Colin Chapman unveiled the legendary Lotus Seven and now Caterham is attempting to rekindle the magic with a retro-flavored special edition debuting today at the Goodwood Revival. Suitably limited to only 60 examples, the new Seven SuperSprint is powered by a peppy three-cylinder Suzuki 660-cc engine with 95 hp on tap to prove once again you don’t need an absurd amount of power to have fun as long as the car is lighter than a feather.

Fitted with a wooden sports steering wheel harking back to the early days of the Lotus Seven, the latest special edition to come from Caterham is an ode to its ancestor. Customers eager to receive a heavy dose of nostalgia can buy the car in one of the six different paint schemes available, each named after famous tracks where the Seven can be enjoyed to the fullest. Relevant examples would have to be Hockenheim (silver with a red noseband), Imola (red + white), and Aintree (green + orange).

For those not willing to share the experience with someone else, Caterham has a tonneau cover to turn the SuperSprint strictly into a single-seater sports car. Other goodies include a limited-slip differential, adjustable suspension, and a Brooklands aero windscreen, while on the inside there are quilted stitched seats clad in leather also used for the handbrake and gear levers. Continuing the retro theme is the battery master cut off switch and you can pay extra to get optional kit, such as stainless steel rear wing guards and sidescreen armrests covered in Innes Tan, Scottish Muirhead leather.

In the U.K., the limited-run SuperSeven starts at £29,995 OTR. Orders are already being taken across Europe, so better act fast.

Caterham has unveiled the new, limited edition Seven SuperSprint at this weekend’s Goodwood Revival as part of its 60th-anniversary celebrations.

Reflecting the anniversary, 60 SuperSprints destined for the UK and European markets go on sale today, completing the pair of special models that have topped and tailed the anniversary year. The similarly retro Seven Sprint was launched at the same event 12 months ago, with all 60 cars sold within a week, quickly becoming the fastest selling Caterham Seven to date.

Offering the ultimate in gentleman racer style, alongside the hearty power of its 95bhp Caterham Works Racing-tuned, three cylinder engine, the Seven SuperSprint is as at home on the road as it is on the circuit.

The Seven SuperSprint is available in six paint schemes, all featuring their own signature colour and named after classic race circuits including Aintree (green with orange noseband), Hockenheim (silver with red noseband) and Imola (red with white noseband).

With 1960’s race style front of mind, Caterham has also created a single-seater option, which comes complete with a tonneau cover for the more serious pilot looking to strip out as much weight as possible.

Graham Macdonald, Caterham Chief Executive Officer, said: “Motorsport and the purist thrill of driving a lightweight race car is in the Caterham Seven’s DNA and are elements that run like a thread through every car we build today, 60 years after the first Seven was made.

“We started our 60th anniversary year with the glorious throwback Sprint – aimed at the more discerning chap or lady driver. As we approach the end of our year of celebration, it makes perfect sense that the car bookending the celebrations is a racer of a similar vein.”

Simon Lambert, Chief Motorsport and Technical Officer, added: “Like the Sprint, this is unquestionably the Seven Caterham would have developed if we had been here in the mid-sixties – and it benefits from being injected with the passion and power of the modern incarnation. The visual appeal of our new baby is only outclassed by a driving experience that puts you straight behind the goggles of Stirling Moss and Innes Ireland.”