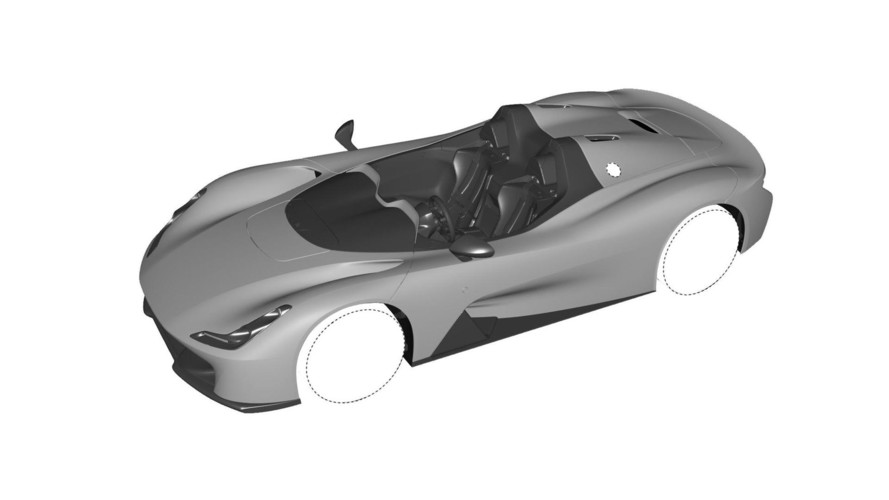 Some of the renderings remove the windshield.

Dallara has registered several alternate designs for its Stradale sports car, suggesting the possibility of multiple available body styles for the performance-focused model.

All of the designs feature the same lower body structure, but each one has a slightly different structure for the top. For example, the company imagines the Stradale as a pure speedster without a windshield. There’s also a version with a windscreen. An extra panel over the nacelles, which sit behind each seat, would allow there to be a removable roof, too. In addition, the company imagines a version with a large, fixed wing on the tail.

Spy shots already show the open-roof Stradale under development, and it looks identical to the windshield-equipped version in these design registrations. The extra ventilation from the topless variant would likely be the better bet for most driving situations because the coupe appears rather claustrophobic inside.

The Stradale will feature a mid-mounted turbocharged four-cylinder engine, which Dallara will possibly source from Ford. The mill will be good for around 400 horsepower (298 kilowatts). It should be plenty to push a model that reportedly weighs about 1,763 pounds (800 kilograms).

Dallara will position the Stradale as a track-ready vehicle that owners can drive on the road. It’ll compete against similar models from Lotus, KTM, and Caterham. All current indications point to the Dallara only being available in Europe. Pricing would reportedly between around $95,000 and $120,000 (€80,000 and €100,000), and production would be limited to 120 units a year.

Dallara hasn’t built its own road car before, but it helped KTM engineer the X-Bow. The firm also has a legacy of building highly successful competition vehicles.