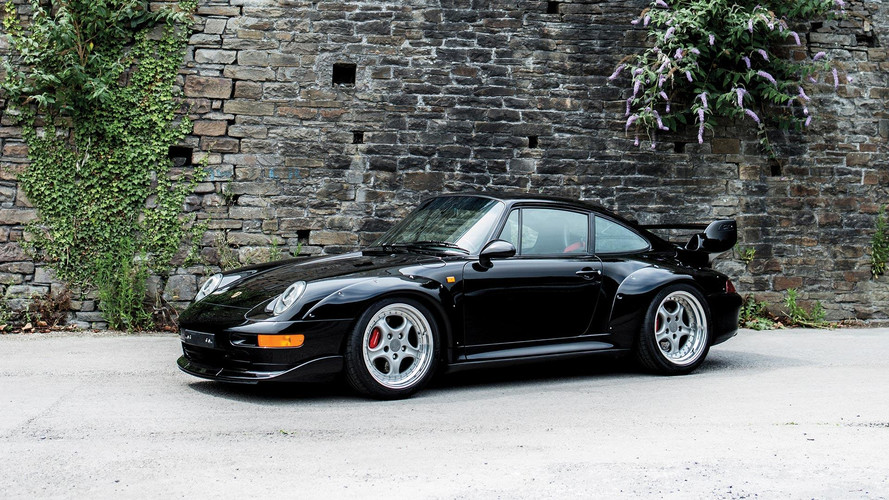 In 1999, the car crashed at the Nürburgring, and the Porsche repaired it to factory standards.

Porsche only built 161 road-going examples of the 993-generation 911 GT2, and as the ultimate evolution of the final air-cooled models, they have started to command quite a hefty sum on the second-hand market. For example, RM Sotheby’s just sold the gorgeous black example above for 775,625 pounds ($1,015,750 at current exchange rates). For reference, the new 2018 911 GT2 RS starts at $294,250 (after $1,050 destination), so you could buy three of them and still have some money left over for the cost of this rare coupe.

The GT2 was Porsche’s homologation special for taking the turbocharged 911 racing. Much like today, the model was rear-wheel drive, which saved weight versus the Turbo’s all-wheel-drive layout. The GT2 also shared the Turbo’s 3.6-liter flat six but extra boost pushed the output to 430 horsepower (321 kilowatts). The bolt-on fender flares came from the Carrera RS.

For a performance-oriented model, the buyer specified some luxurious amenities like air conditioning and electric windows. Black leather upholstery looks fantastic with the dark exterior paint, too.

This GT2 has covered just 11,185 miles (18,000 kilometers). The first owner kept the car for 19 years, and the maintenance log showed that he had it until at least September 2005. There was an accident at the Nürburgring in 1999 that damaged the front and rear. The owner then sent the car back to Porsche for a complete repair to factory specifications. The GT2 has covered just 1,864 miles (3,000 kilometers) since the automaker fixed the coupe.