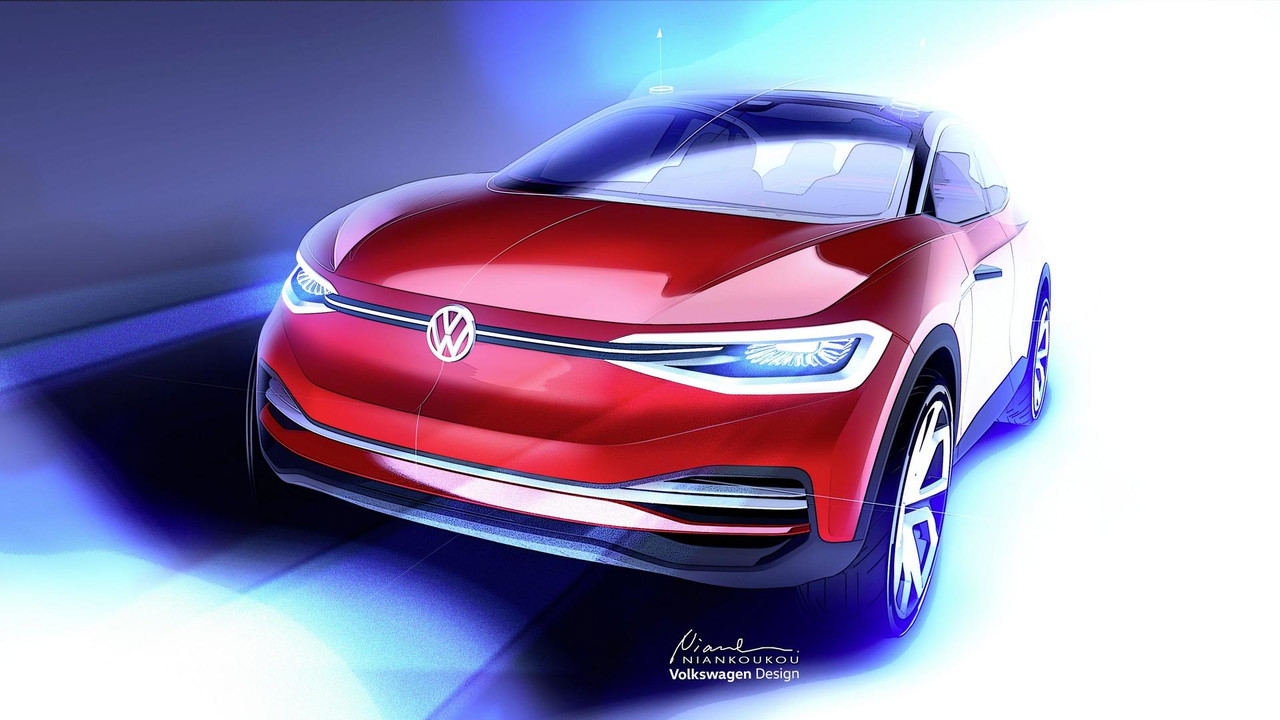 This one is closer to production than the initial version.

Update: Additional teaser clips have been added at the end of the article.

Volkswagen originally introduced the I.D. Crozz in April at Auto Shanghai and now it’s about to unveil a slightly updated version that will switch from the bland silver paint to a more eye-catching red shade. For the moment, we only have a teaser design sketch revealing some of the changes the fully electric concept has gone through. Spoiler alert: there aren’t that many.

See other cars VW will bring to IAA:

The LED headlights now come with different graphics that make them look like illuminated flowers whereas the first I.D. Crozz had a simpler look with several horizontal lines. This time around, it appears the company’s logo no longer lights up and is flanked by a black piece of trim instead of the body-colored strip of its predecessor.

VW’s designers have also made some tweaks to the front bumper and it now hosts a full-width silver fin sitting above a more prominent one finished in red. We can also catch a glimpse of the side profile lacking regular door handles and equipped with the same door-mounted cameras instead of conventional mirrors. The rear end isn’t being shown, but we are expecting some discreet taillight modifications and perhaps a resculpted bumper.

Technical specifications have not been provided and there is a good chance the hardware will be carried over from the first I.D. Crozz pictured above. It had two electric motors good for a combined output of 302 horsepower (225 kilowatts), granting the concept with a top speed of 112 mph (180 kph). Promising to deliver GTI-like levels of handling, VW’s first take on the zero-emissions crossover came with a big 81-kWh battery incorporated into the floor and with enough energy for 311 miles (500 kilometers), according to the New European Driving Cycle.

The updated I.D. Crozz will premiere on September 12 at the Frankfurt Motor Show where VW will also have on display the new Polo, T-Roc, and the Amarok Aventura Exclusive concept.

Volkswagen at IAA 2017: Preview of the further developed I.D. CROZZ

Volkswagen is advancing the development of a new generation of innovative electric vehicles and will be presenting a further developed version of the I.D. CROZZ next week at the IAA (International Motor Show, 12-24 September 2017) in Frankfurt (D).

The redesigned concept car is based on the all-electric architecture and is characterised by a clean, powerful design. The front and rear end designs, in particular, point more in the direction of a production model. Also defining its styling are the wide bonnet with the front wings contoured in large radii and the roof whose exterior surface is finished in high-gloss black. The highly contemporary SUV look continues into the interior thanks to its compact electric drive and integration of its lithium-ion battery in the vehicle floor, which results in an ‘open space' – a lounge-like spatial concept with four variable individual seats.