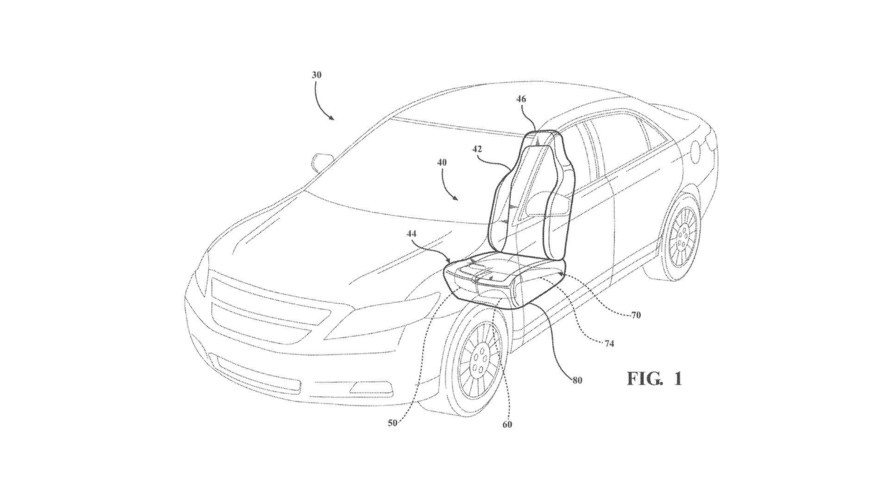 They will inflate during a crash to help keep you in your seat.

The latest round of patent applications from Ford shows us something peculiar. The automaker has filed a patent application for what it calls a “vehicle seat bottom with independently deployable devices.” We’ll assume that’s patent speak for airbags, or at least in this instance, something that quickly inflates in the bottom of the front seats to help protect occupants from submarining during an impact. Submarining? Airbags in seat bottoms? What is this all about?

If you’re a little confused right now, don’t worry. We were as well, which is why we pulled up this nifty report from the National Center for Biotechnology Information, which talks about passenger submarining and seats and why a device like this from Ford could be a big deal. In some frontal accidents, the force of the crash can push people down and forward hard enough to where the lower portion of the seat belt actually rides up over the stomach, potentially causing severe abdominal injuries. Seat belt designs as well as lower seat designs can contribute to this problem.

Ford’s patent includes two thigh supports on the lower seat that are adjustable, providing an extra measure of seat adjustment and comfort for occupants during normal driving. The supports are also coupled with “deployable devices” that can inflate independently in the event of a collision, raising the thigh supports. The force of the inflators would vary depending on the position of the thigh supports, but the idea is that the fully-deployed supports would help absorb the force of the impact on passengers, while reducing or eliminating the chance of submarining.

The patent application goes on to talk about specifics with the individual components, but the end result is the same. Basically, this would be a seat bottom with adjustable thigh supports that would literally lift and push front seat occupants up in the event of a frontal impact.

It’s certainly an interesting idea, and it’s not like modern seats don’t already have airbags in them. As far as we can tell from the patent, the “deployable devices” for the thigh supports aren’t quite the same as high-velocity airbags. But still, would you feel comfortable sitting on something that can suddenly “deploy” upwards?