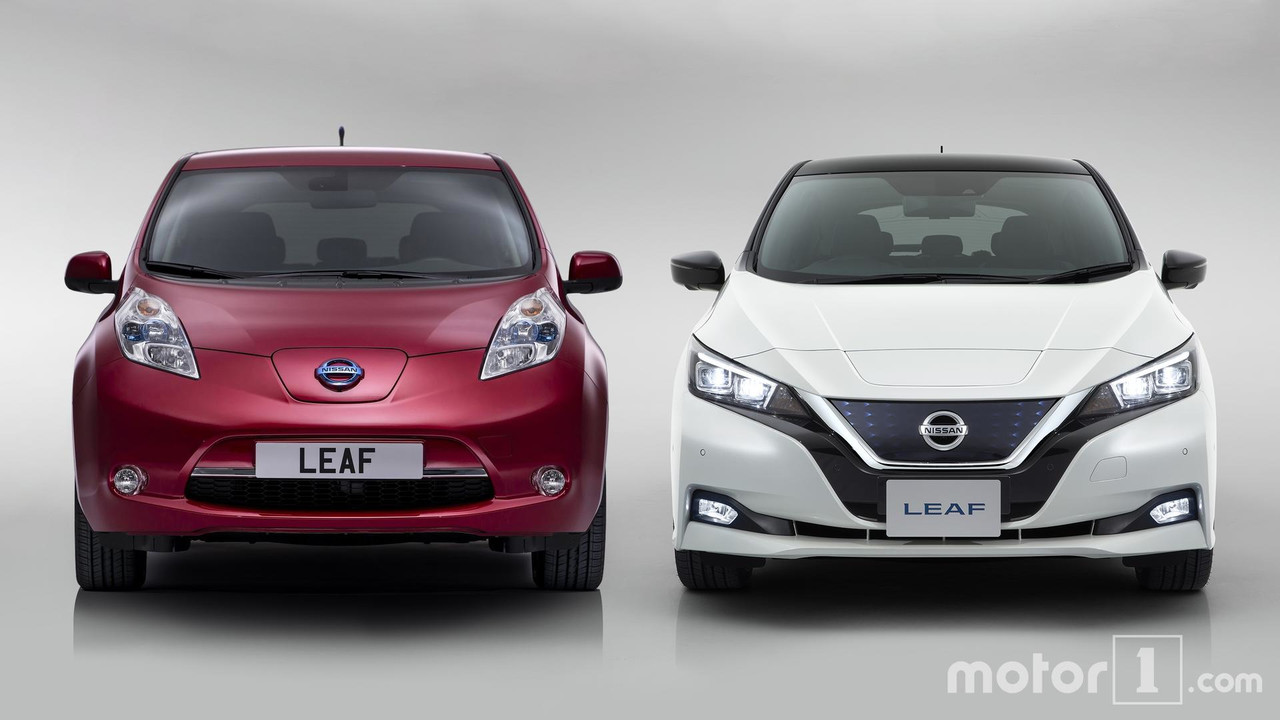 With more electric vehicles on the road, the Nissan Leaf now faces some stiffer competition in the long-range EV market – i.e. the Chevrolet Bolt and the Tesla Model 3. The new 2018 Nissan Leaf seeks to be more competitive with a slew of driver assistant technologies, an increased range, and a sportier and tech-forward design. Let’s take a look at just how differently the new Leaf performs, and how it looks inside and out, compared to its predecessor.

Coming in at $690 cheaper, the new Leaf has 43 more miles of electric range to boast about – making that 150 miles total. Under the hood, there’s a little more oomph with a larger 40 kilowatt-hour battery that produces an additional 40 horsepower and 49 pound-feet of torque compared to the last-gen model. But the two Leafs seem to fall from the same tree when it comes to overall size and weight.

The new Leaf looks far angrier than its more easy-going predecessor. Replacing the big round headlights are angular projector-beam units that employ “dual, direct lens low and high beams,” complemented with LED accent lights. The Leaf also has a more traditional V-shape grill evocative of other Nissan vehicles, with a clear-blue 3D mesh pattern to establish its EV status in the lineup. The hood also has some steep creases to give the new Leaf a far sportier look.

The charge port is also bent 45-degrees to allow easier access for the charging cable.

A “floating roof” design element helps the new Leaf come closer in line with other vehicles in the Nissan portfolio. Angular character lines and stylized side sills give it a more planted look. In some configurations, the Leaf can be had with a contrasting blue color on the roof and side mirrors. New “clear-cut curve and aero-design wheels” also help reduce drag. With the bolder character lines, the profile has a sleeker and more tech-forward appearance.

Replacing the long and skinny taillights are new “boomerang” units that look like ones found on the Nissan Murano and 370Z. A new integrated rear spoiler sits on top of the hatch and is blacked out along with elements below the rear window, similar to the BMW i3. The underfloor and diffuser-type bumper not only help the Leaf look more aggressive, but also reduce overall drag.

Unlike the exterior, the interior design isn’t a far departure from the last-gen Leaf. Familiar elements like the circular shifter with blue accents, and climate controls remain. New elements include a seven-inch center touchscreen, flat-bottom steering wheel, blue stitching on the seats, instrument panel and steering wheel, different materials to create a more upscale feel, and matte grey and black accents throughout the cabin. In front of the driver, there’s a new analog speedometer paired with a multi-information digital display. A different cupholder configuration also allows for storage of a smart phone conveniently next to a 12-volt power outlet and USB port.