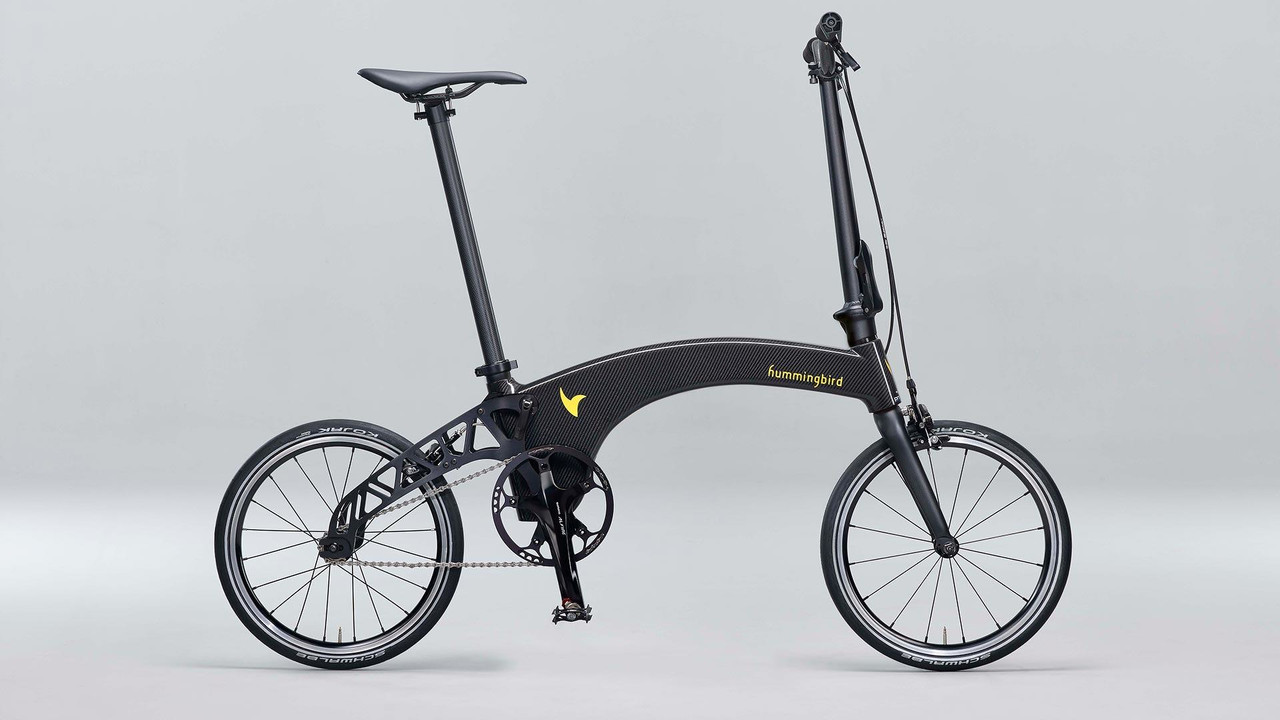 Prodrive knows how to build race-winning vehicles, but the British firm now brings that expertise to two wheels. For the new Hummingbird bicycle, the engineers use their experience at keeping race cars light to create the world’s lightest folding bike at just 15.2 pounds (6.9 kilograms). Plus, the cycle folds down in just five seconds, which Prodrive claims is also the world’s fastest time.

“Hummingbird combines all the key attributes of technical excellence that Prodrive stands for,” David Richards, chairman of Prodrive, said.

Much of the Hummingbird’s low mass comes from its carbon fiber frame. The company asserts that the material has a tensile strength four times higher than steel but at a quarter of the weight. Prodrive’s engineers fine-tuned the frame so that the layout optimized rigidity without being overly heavy. The design still passed all the ISO bicycle safety tests, too.

Riding the Hummingbird should be quite easy, too, because of its low rolling resistance. The bike rides on high-pressure slick tires and sealed bearings, which allow for relatively little effort while pedaling.

Mechanically, the bike features a billet aluminum swingarm, each of which requires 24 hours to produce. The folding mechanism features a rear triangle that pivots around the bottom bracket. This design means that the chain tension never changes and eliminates needing to have a chain tensioner on the cycle.

Prodrive currently builds each Hummingbird to order, and they come individually numbered. Prices starting at 3,495 pounds ($4,550 at current exchange rates). A four-speed version, rather than the standard single gear, takes the cost to 3,745 pounds ($4,877). Buyers can get the bike in Hummingbird Yellow, Prestige Black, Burnt Orange, and Freedom Blue. For an extra $500, the Carbon Edition exposes the frame’s lightweight material.

Because Prodrive makes the Hummingbird to order, buyers outside the U.K. can contact the company to order one. Prices vary based on exchange rates at the time. Company spokesperson Ben Sayer told Motor1 that he thinks one has already gone to the United States.

A Hummingbird with an electric boost will be an additional option next year. However, the system will also add some weight to the model.

The Hummingbird Bike, engineered by Prodrive, is the world’s lightest folding bike and is now on sale. The bike has been in development for more than 18 months and is the British motorsport and advanced technology group’s first venture into cycling.

The Hummingbird sets new standards in both the design and engineering of folding bikes. It weighs just 6.9 kg and has a unique three-step folding mechanism, which allows the bike to be collapsed in just five seconds – also making it the world’s ‘fastest’ folding bike.

At 6.9 kg, the bike is around 3 kg lighter than any comparable folding bike on the market. Central to this is a lightweight carbon frame, hand made by Prodrive Composites in Milton Keynes, and which gives the bike its distinctive styling, very different to any other bike in the world.

The Hummingbird was conceived by Petre Craciun, a London-based designer and keen cyclist. He found that existing folding bikes on the market were heavy and unattractive so decided to design his own. He approached Prodrive at the beginning of 2016 to refine the bike, optimise its ride and handling, and create the carbon frame so that it could be produced in volume and sold globally.

Prodrive’s engineers carried out a rigorous design and development process using the latest computer aided design and analysis software, to optimise the bike’s rigidity while minimising weight, the same approach it takes with all its race and rally car. This ensured the bike passed all the ISO bicycle safety tests at the first attempt.

Each bike is hand-built at Prodrive’s headquarters by the M40 at Banbury, with each frame individually numbered and available in four colours. A visual carbon frame is also available with the herringbone carbon weave laid up precisely and lacquered to give a perfect finish.

The Hummingbird comes as a single or four-speed option with an electric boosted option currently undergoing evaluation and which should be available in 2018.

Petre Craciun, Hummingbird’s designer, said: “Since buying my first BMX bike at the age of 14, I’ve become more and more obsessed with the idea of going everywhere freely. It was this desire to remove the restraints of other more cumbersome folding bikes that sparked the idea to design a transportable option. Hummingbird’s functionality, coupled with its eye-catching design, makes it the stand-out product for the sophisticated commuter.”

David Richards, chairman of Prodrive, said: “Hummingbird combines all the key attributes of technical excellence that Prodrive stands for. But this is just the beginning. As with all the projects we work on with our clients in the motorsport, automotive, marine and aerospace sectors, we will be constantly striving to find new ways to innovate for the cycling industry.”

Each frame and bike are made to order with prices starting from £3,495. For more information and to order your bike visit www.hummingbirdbike.com.