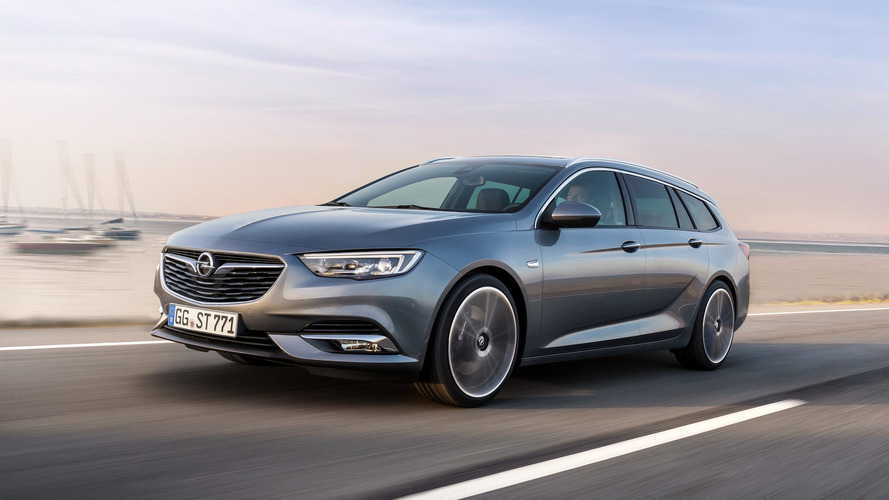 Offered exclusively with an eight-speed auto and an AWD system.

A range-topping biturbo diesel version of the second generation Opel Insignia will celebrate its world premiere at the upcoming Frankfurt Motor Show next week, where also the Insignia GSI and Grandland X will be displayed. It is powered by a newly-designed 2.0-liter engine, which produces 210 horsepower (154 kilowatts) at 4,000 rpm, and which we expect to see in the GSI sometime next year.

Thanks to sequential two-stage turbocharging, the diesel mill generates massive torque of 354 pound-feet (480 Newton-meters) at low 1,500 rpm. The four-cylinder motor will be mated exclusively to an eight-speed automatic gearbox, sending power to all four wheels through a high-tech all-wheel drive with torque vectoring.

This near-premium setup is good for a 0 to 62 miles per hour (0-100 kilometers per hour) acceleration in 7.9 seconds and a top speed of 145 mph (233 kph). Opel is giving fuel consumption numbers corresponding to the new Worldwide Harmonized Light-Duty Vehicles Test Procedure (WLTP), which is considered much more realistic than the NEDC cycle, showing the vehicle will need between 7.5 and 8.0 liters per 100 kilometers (29 – 31 miles per gallon) combined.

Interestingly, a new generation AdBlue injection ensures the Insignia 2.0 BiTurbo already meets Euro 6.2 emissions standard, which becomes mandatory for all registrations on the Old continent as of autumn 2018.

We tested the new Insignia:

Available for the full range of Insignia variants (Insignia Grand Sport, Insignia Sports Tourer, and Insignia Country Tourer), the new 2.0-liter diesel can already be ordered with production expected to start right after the Frankfurt show.

Insignia’s diesel portfolio now consists of three 1.6-liter and two 2.0-liter motors, with power ranging from 110 hp (85 kW) to 210 hp (154 kW). Below you can find an overview of the diesel engines currently available for the second generation of the model. All figures relate to the European markets.

Rüsselsheim.  Production-start for the new top-of-the-line engine and the Insignia Country Tourer from Opel: With the summer slowly drawing to an end, the first 2.0-liter BiTurbo diesel engines will roll off the production line. They are tailored for the Country Tourer along with all other variants of Opel’s flagship. With the Grand Sport, Sports Tourer and Country Tourer the second generation Insignia can be ordered with the new top-of-the-range diesel this year. The Country Tourer appeals to all Insignia fans looking for stylish and practical station wagon with off-road looks. The newcomer will celebrate its world premiere at the Frankfurt International Motor Show (September 14-24).

Such strength must be transferred to the road intelligently, which is why the top-of-the-line engine always comes in combination with a smooth-shifting eight-speed automatic transmission and high-tech all-wheel drive with torque vectoring. In addition to the power output, the drivability (turbo power in every situation) and the refinement of the new common rail engine are also further improved compared with the existing extremely popular 2.0-liter unit with single turbocharger (125 kW/170 PS; official fuel consumption Grand Sport with front-wheel drive in accordance with NEDC urban 6.7 l/100 km, extra-urban 4.3 l/100 km, combined 5.2 l/100 km, official specific combined CO2 emissions 136 g/km).

The newly developed four-cylinder BiTurbo is the first Opel engine that already meets the strict requirements of the Euro 6.2 emissions standard (which becomes mandatory for all registrations as of autumn 2018). Furthermore, in addition to the legally required NEDC Data, Opel also determined values in accordance with the Worldwide Harmonized Light-Duty Vehicles Test Procedure (WLTP) which are officially required as of this autumn. The WLTP values (Insignia Grand Sport 2.0 BiTurbo WLTP fuel consumption range 12.2-6.2[1] l/100 km, combined 8.0-7.5 l/100 km, 209-196 g/km CO2) are much more realistic than the hitherto officially applicable NEDC figures (Official fuel consumption Grand Sport 2.0 BiTurbo in accordance with NEDC urban 8.7 l/100 km, extra-urban 5.7 l/100 km, combined 6.9 l/100 km, official specific combined CO2 emissions 183 g/km). The WLTP figures also take different driving styles into consideration, which enables customers to get a better estimate of their own fuel consumption[2]. An overview of the more realistic consumption figures in accordance with the WLTP cycle can be found on opel.de.

Like the existing 125 kW/170 hp 2.0-liter engine with single turbocharger, the new top-of-the-line diesel also features highly effective Selective Catalytic Reduction (SCR) exhaust after-treatment technology with AdBlue injection, which removes nitrogen oxide (NOx) from the engine’s exhaust gases. The watery urea solution which contains ammonia (NH3) reacts with the nitrogen oxides in the SCR catalytic converter and creates harmless nitrogen and water vapor. The Diesel Particulate Filter (DPF), which is now located in the direct vicinity of the engine, warms up as quickly as possible after a cold start and stays hot enough to reliably filter soot particles and regenerate itself even at low exhaust temperatures (slow driving).

Opel has pulled out all the stops for maximum fuel efficiency and maximum fun-to-drive. The new diesel features two turbochargers functioning sequentially. The intake air enters the first turbocharger where it is compressed and passed to the second turbo. This is driven by Variable Geometry Turbine vanes in the exhaust gas, which increase torque at low engine speeds and raise power at higher engine speeds. VGT then adjusts the vanes to parallel with the gas flow, thus reducing back pressure and lowering fuel consumption. The now highly compressed and very hot intake air then passes through an intercooler on the way to the combustion chambers. Diesel fuel is then injected through seven-hole jets in up to ten sequences at 2000 bar. The boost-pressure is controlled, according to engine-speed and load, by three bypass valves and an electrically actuated variable turbine geometry.

Apart from increased efficiency, higher power output and torque, refinement and noise attenuation were priorities in the design of the new engine. The Opel engineers therefore gave the engine a cast-iron crankshaft, balance shafts, a stiffened flywheel and a two-piece oil sump, in order to reduce diesel-typical vibrations and acoustics to a minimum. In order to further lower fuel consumption, the electric water pump is only switched on when temperatures require it. Just like the well-known 2.0-liter diesel, the new BiTurbo diesel is built in Opel’s Kaiserslautern plant.

A 2.0 liter BiTurbo diesel with 143 kW/195 hp and maximum torque of 400 Nm already made its debut in the first-generation Insignia in 2012, and was then offered in the Astra, Cascada, GTC and Zafira Tourer. The new 154 kW/210 hp and 480 Nm engine for the Insignia fits perfectly into the range of current Opel power units with two-stage turbocharging.

Full package: The diesel engines for the new Insignia

Below please find an overview of the diesel engines currently available for the Insignia. All figures relate to the Grand Sport limousine.

[2] The values mentioned are based on the WLTP cycle. They have been determined according to a standardized driving cycle conducted on a dynamometer. Everyday values can differ based on driving style, usage and other factors.

[3] All consumption data refer to diesel fuel in accordance with NEDC. All data refer to the EU base model with standard equipment. The stated data were determined according to regulation 2007/715/EC, taking into consideration the vehicle curb weight, as stipulated by the regulation

[4] All consumption data refer to diesel fuel in accordance with NEDC. All data refer to the EU base model with standard equipment. The stated data were determined according to regulation 2007/715/EC, taking into consideration the vehicle curb weight, as stipulated by the regulation