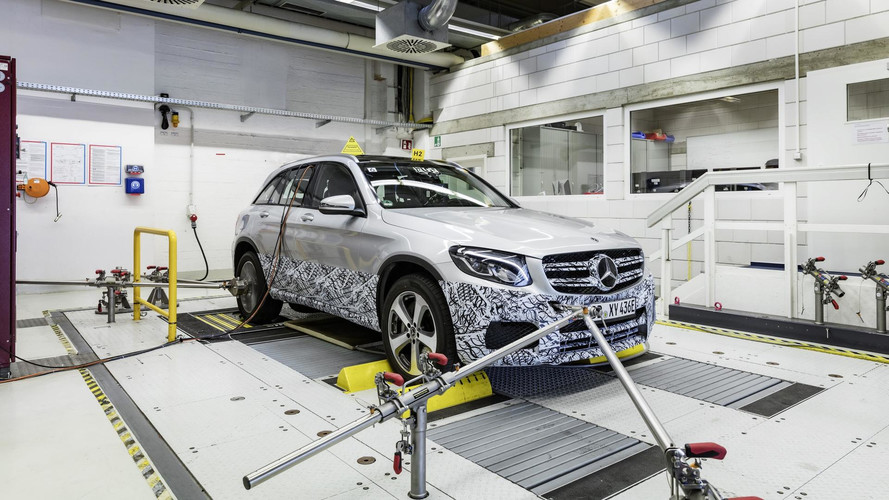 It's a hydrogen vehicle, but with an electric twist.

It was back in November 2015 when Mercedes announced plans for a GLC F-Cell before unveiling a prototype of the hydrogen-powered crossover in June 2016. Fast forward to present day, the pre-production model is about to break cover at the Frankfurt Motor Show, but not before one last preview showing the world’s first plug-in hydrogen vehicle - hence the two fuel caps - while undergoing rigorous testing.

Since it started working on fuel cell technology with the 1994 Necar 1, Mercedes has abused more than 300 vehicles, which have collectively covered almost 18 million kilometers (11.1M miles) in various climates. In the case of the GLC F-Cell, which has been in the works since 2015, it had to endure temperatures ranging from -40 to 60 degrees Celsius (-40 to 140 degrees Fahrenheit) and hurricanes with wind speeds of up to 265 kph (165 mph) during indoor simulated conditions.

Aside from being put through its paces inside the company’s facility, the GLC convoy headed to Spain, Sweden, and Germany for road evaluation in more than 500 individual tests. Mercedes kept track of the hydrogen used since kicking off the development tests in 2015 and mentions approximately 200 tons were necessary, while 1,800 tons of water vapors were emitted in the process.

Technical specifications have not been released and we will have to wait until next week to learn about the innards of the alternatively powered GLC. These should remain very close to those of the aforementioned prototype, which had a pair of hydrogen tanks made from carbon fiber, each weighing 4 kilograms (8.8 pounds), and incorporated into the floor. Mercedes estimates a full refill is going to take approximately three minutes, so only a little bit more than filling up a gasoline- or diesel-running car.

What truly sets the GLC F-Cell apart from all of the other fuel cell cars is the lithium-ion battery pack mounted at the back of the crossover. It has a capacity of 9 kWh and enables the prototype to run solely on electric power for up to 50 kilometers (31 miles) as per the New European Driving Cycle. With the battery recharged externally (that’s what the second fuel cap is for) and the hydrogen tanks filled up, the eco-friendly CUV can cover somewhere in the region of a NEDC-rated 500 km (311 miles).

When Mercedes unveiled the GLC F-Cell prototype last year, it said the production version would go on sale initially in Germany, Japan, and the United States towards the end of 2017, with U.K. to follow shortly in 2018. Details about how much it would cost were not released, though one company official did say it would have a “price the customers will accept.”

Full specs and details about availability will be disclosed on September 12 when the production-ready GLC F-Cell will be introduced at the 2017 Frankfurt Motor Show.

Exclusive insights into the development and testing of the GLC F-CELL: The next generation of fuel cell vehicles from Mercedes-Benz on the road to production readiness

Stuttgart. Fuel cell technology is an integral part of Daimler's powertrain strategy. Mercedes-Benz has already gathered experience with hydrogen-powered electric vehicles over several vehicle generations. To date, the fleet of Daimler fuel cell vehicles, which together with a host of research vehicles numbers more than 300, has collectively covered nearly 18 million kilometres.

The next generation of fuel cell vehicles from Mercedes-Benz is currently being developed based on the GLC. The pre-production vehicle of the Mercedes-Benz GLC F‑CELL, which will be displayed publicly for the first time at the IAA Frankfurt Motor Show in September 2017, combines the innovative fuel cell and battery technology into a plug-in hybrid. With it, Daimler substantiates its technology leadership and makes a statement within its CASE innovation strategy. CASE stand for the fields of: networking (Connected), autonomous driving (Autonomous), flexible use (Shared & Services) and electric drive systems (Electric). Currently, Mercedes-Benz is getting ready for the series production of the fuel cell vehicles.

Automobiles are initially developed on the computer. The first crash tests, aerodynamics analyses or chassis tests are also conducted in the virtual world using electronic simulations, long before the first prototype is built.

Intensive functional and fatigue testing of individual components and later also of the complete test vehicles on a host of test rigs speed up the development process. The Fuel Cell Centre of Competence Nabern east of Stuttgart plays a crucial role in the GLC F‑CELL. The fuel cell experts used about 200 tonnes of hydrogen in their developments tests since 2015. The only "exhaust gas" emitted was water vapour – 1800 tonnes of it in all.

The Vehicle Safety Technology Center (TFS), which opened in November 2016 as the world's most modern crash test centre, offers entirely new possibilities for testing vehicles with alternative powertrains, vehicle-to-vehicle tests or for the design of assistance systems and PRE‑SAFE®. The GLC F‑CELL received its aerodynamic finishing touches in the wind tunnels in the Mercedes-Benz Technology Center in Sindelfingen: Even the most extreme weather events can be moved indoors here. Temperatures ranging from minus 40 to plus 60 degrees Celsius, hurricanes with wind speeds of up to 265 km/h, tropical downpours and heavy snowstorms are all part of the standard repertoire available to the test engineers.

After the first prototypes were roadworthy, the summer and winter road testing of the GLC F‑CELL began. The vehicles were driven on the proving grounds in Spain (IDIADA near Barcelona), Sweden (Arjeplog) and Germany (Boxberg), among others. The road tests also took the test teams to the Sierra Nevada (Spain) and the low mountain ranges of the Schwäbische Alb and the Black Forest in Germany. The test programme comprised more than 500 individual tests, which in addition to the standard test regimen for all vehicles also included special tests for the electric powertrain, the fuel cell, and the interplay of all powertrain components.

Safety: No compromises with alternative powertrains either

The safety experts of Mercedes-Benz were able to build on almost 30 years of company experience with fuel cell vehicles. The special attention of the engineers in the development of the F‑CELL variant of the GLC launched in 2015 was directed to the integration of the safety-relevant components such as the hydrogen tanks, the gas seals and valves, and the high-voltage components.

The hydrogen tanks are installed in the crash-protected area between the vehicle axles and are protected additionally by a subframe wrapped around the tanks. For the event of a crash, additional extensive measures were implemented such as, for example, a multi-stage valve system as well as special protective circuits for the high-voltage system. The crash tests conducted with the pre-production GLC F‑CELL and earlier hydrogen vehicles show that the engineers achieved a level of safety comparable to that of conventional vehicles. As a result, the latest F‑CELL generation complies not only with all statutory requirements, but also with the even more rigorous Mercedes-Benz in-house standards.

The development of the fuel cell powertrain began already in the 1980s. Back then, Daimler researchers for the first time studied cold combustion – the generation of electricity through the reaction of hydrogen with oxygen in a fuel cell. As a pioneer, Mercedes-Benz unveiled the first fuel-cell vehicle to the global public in 1994 – the NECAR 1. Many more vehicles followed, including the A‑Class F‑CELL test fleet (2003). The Citaro FuelCELL Hybrid urban bus has covered a distance of more than five million kilometres in line service since 2003.

In 2011, special attention focused on the F‑CELL World Drive, the first round-the-world journey in fuel cell vehicles. During this event, three B‑Class F‑CELL vehicles drove more about 30,000 kilometres in 14 countries over the course of 125 days. In all, 200 vehicles were built. They completed more than ten million kilometres in customer hands and were refuelled 36,000 times during this period.

In 2015, the F 015 Luxury in Motion concept car already presented such a system designed for 1100 kilometres of zero-emission driving, foreshadowing the technology leap toward the F‑CELL plug-in hybrid powertrain.

After a total of more than 18 million kilometres across all vehicles from the NECAR to the GLC-based electric vehicle with fuel cell, the developers of Daimler and Mercedes-Benz consequently know what matters. The powertrain system has proven its market maturity.