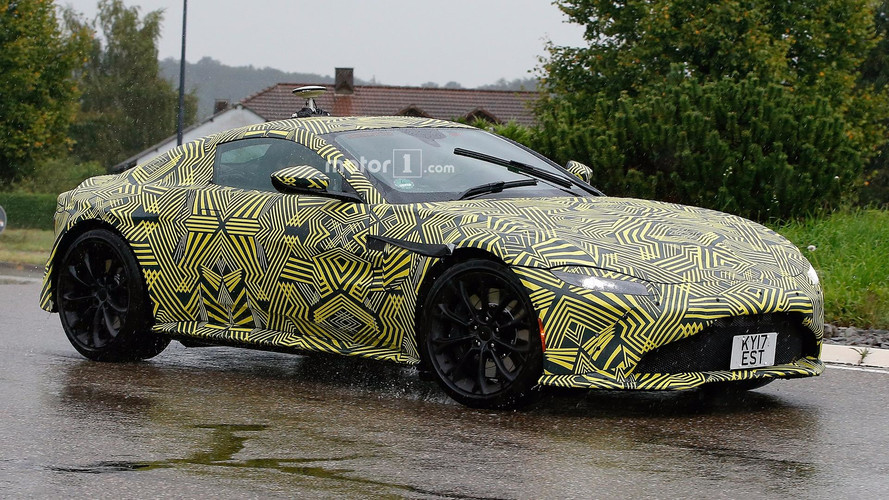 James Bond's DB10 is morphing into a production car as the new Vantage.

The entry-level Aston Martin is about to receive a major redesign for its next generation due to be unveiled in full by the end of 2017. New spy shots depicting what is likely a near-production prototype show the V8-powered coupe testing on a rainy day and hiding its sleek body underneath a camouflage that might make you feel a bit woozy.

Despite the significant amount of disguise, it’s pretty obvious the new Vantage will adopt an exterior design very similar to James Bond’s $3.4-million DB10 from “Spectre.” We can already see most of the tiny headlights and taillights, which are significantly different than those of the DB11. The Vantage’s smaller proportions make it look sportier, especially when viewed from its sensuous side profile showing the shorter rear overhang.

It’s not just the styling that has gone through some pretty big tweaks as the changes continue underneath the reshaped metal. Speaking of which, Aston Martin’s latest developments in aluminum architecture derived from the DB11 have been put to good use in the new Vantage and that should play dividends in terms of torsional rigidity. A weight loss is expected, together with other enhancements to make it both faster and more efficient than its predecessor.

At the heart of the next-generation Vantage will be an AMG engine, specifically the biturbo 4.0-liter V8 set to deliver somewhere in the region of 500 horsepower if we were to rely on reports. If that number will pan out, it means the new model will have roughly 70 hp more than its predecessor. Corroborated with the possible diet, it should shave off quite a lot from the 0-62 mph (0-100 kph) sprint that takes 4.8 seconds in the outgoing model. Top speed is unlikely to change a lot from the current 190 mph (305 kph).

Further down the line, a V12 derivative will spice up the range and it will inherit the biturbo 5.2-liter engine from the flagship DB11. A limited-run AMR version seems plausible as well, though it’s unlikely to come out so early in the life cycle.