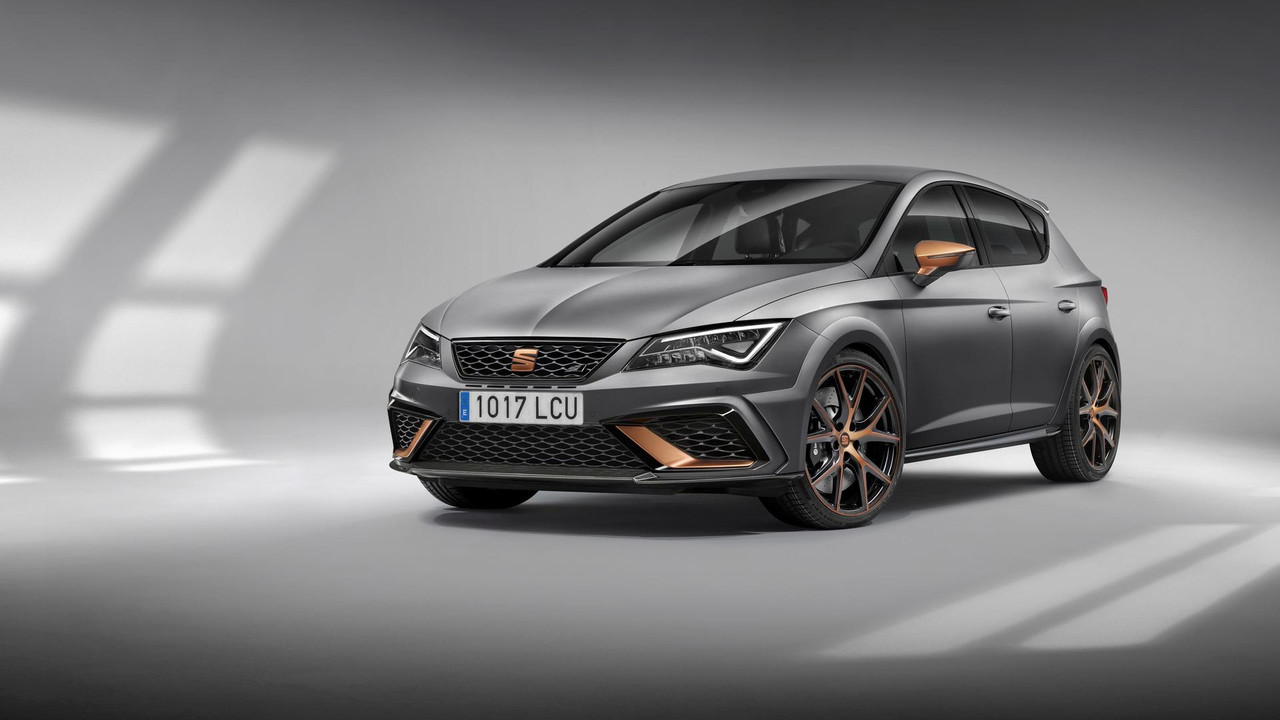 Say hello to SEAT's most powerful road car ever.

When SEAT introduced the mid-cycle refresh for the Leon range, the hot Cupra model received an extra 10 horsepower for a grand total of 300 hp, which despite the bump in output, it was still 10 hp less than the Euro-spec VW Golf R facelift. Now, the sleek compact hatchback is able to match the grunt provided by its counterpart from Wolfsburg thanks to a new R version packing a respectable 310-hp punch.

While the Golf R is a regular production model, the Leon Cupra R will be a special edition limited to only 799 units. Bear in mind only the version equipped with a six-speed manual gearbox has the aforementioned 310 hp as the DSG-equipped model features 300 hp. Don’t let the “R” badge trick you into believing this is an all-wheel-drive car like the Golf R as the range-topping Leon comes exclusively with a front-wheel-drive layout. If you’re willing to sacrifice 10 hp for the sake of having a grippy AWD layout and a bigger trunk, the 300-hp Leon Cupra wagon should do the trick.

To further differentiate it from the lesser versions of the lineup, SEAT has developed carbon fiber trim pieces for both front and rear spoilers, together with larger front air intakes and side mirror caps featuring a copper finish also applied on the badges and "Cupra" lettering. The side skirts are also Cupra R-only goodies, and so are the copper-look wheels and roof-mounted rear spoiler.

Buyers will get to pick from the standard Midnight Black and Pyrenees Grey body paints or the more expensive Matte Grey finish reserved for this model. All cars planned for production will boast several other hardware upgrades, including a new exhaust system, modified Brembo brakes, and a tweaked version of the Dynamic Chassis Control system. Last but not least, SEAT’s engineers will also fiddle with the camber at the front axle.

The company’s most powerful road-going production car ever will grace the stage at the 2017 Frankfurt Motor Show later this month. Also at IAA will be the brand’s new Arona subcompact crossover and the Ibiza supermini fitted with a 1.0 TGI engine running on compressed natural gas. During the same event, SEAT will announce the finalists for the midsize SUV’s name ahead of the model's launch in 2018.

FROM WEB TO STAGE: SEAT PRESENTS THE BRAND MAIN HIGHLIGHTS FOR FRANKFURT MOTORSHOW ONE WEEK BEFORE THE SHOW STARTS

Martorell, 04/09/17. - Luca de Meo, President of SEAT, has unveiled to the media the main novelties of the upcoming IAA Motorshow via a Web Media Conference (http://iaawebconference.seatprapp.com).

For such a special occasion, the Arona and the Leon CUPRA R will take center stage on the first press day and will be presented in a different way. On Tuesday September 12th at 12:15 hours, the SEAT Press Conference will be hosted by Luca de Meo,  President of SEAT, who will be tackling corporate figures, the New Arona, the Leon CUPRA R, Alexa and the public announcement of the New large SUV Finalist Names. In the afternoon, members of the Executive Committee will give two Press Talks: At 15:00 hours, Wayne Griffiths, Executive Vice-President for Sales and Marketing and Dr. Matthias Rabe, Executive Vice-President for Research and Development will be presenting the New Leon CUPRA R and the future CUPRA business projects, and at 16:30 hours, Ned Curic, Vice-President for Alexa by Amazon and Dr. Matthias Rabe will be speaking about the integration of Alexa, the new innovative voice-controlled digital assistant in the SEAT range.

SEAT is experiencing some of its best times as a company. In the last four years, SEAT has achieved a growth of 30%; last year it sold almost 410,000 units and made operating profits of 143 million euros, the company’s best ever results. So far in 2017, in the first eight months of the year, SEAT has sold more than 310,000 cars, which represents an increase of more than 13% compared to the same period last year. This is the best result since 2001.

The new SEAT Leon CUPRA R will undoubtedly be drawing the attendees attention at the Spanish brand stand at the IAA 2017. SEAT’s most powerful road car in history will also be its most exclusive, owing to the fact that it will be limited to 799 units. The new SEAT Leon CUPRA R will be available with manual gearbox (310 PS) and DSG (300 PS), with six speeds and front wheel drive. There are some stand-out details on the bodywork such as exclusive carbon fiber details on the front and rear spoilers, side skirts and rear diffuser, wing mirrors in copper, as well as the rims, with the wheel arches and the front area getting a new, more powerful design around the air intakes. The SEAT Leon CUPRA R will be available at the end of 2017 and the 799 lucky owners will be able to enjoy an interior that is also been given the carbon fiber and copper treatment, as well as the steering wheel and the gearstick upholstered in Alcantara®. There will be three colors to choose from; Midnight Black, Pyrenees Grey (neither with extra cost) and the exclusive Matte Grey.

The new Leon CUPRA R also receives a few extras. On the front axle, the camber has been modified and the adaptive suspension DCC (Dynamic Chassis Control), not forgetting the Brembo brakes. There is a new exhaust system too. So sportier, yes, but above all else a unique and unrepeatable model, reserved for 799 of the brands most demanding drivers.

With the New Arona SEAT is entering the compact crossover segment. Not only that, but the Frankfurt Motorshow will see the starting gun fired for the sales of the Arona, as orders for the new crossover will begin to be taken on the same day that the car makes its public debut. The first cars will be delivered to customers at the end of November and the starting price range in Germany and Spain will be unveiled during the first press day.

Destined for those drivers that are looking for that extra exciting component to their driving experience, the Arona takes its place in the SEAT SUV range below the Ateca and, following the Ibiza, is the second car to be manufactured using the MQB A0 platform. Manufactured exclusively in Martorell, it stands out thanks to its design, height, width, its compact crossover dimensions, its wide range of possibilities for personalization and the most advanced technology in safety and connectivity.

Arona continues with the biggest product offensive ever, following the Ateca, the upgraded Leon, the new Ibiza and will be completed with the large SUV coming next year.

Among all car manufacturers in Europe, SEAT will have the  first vehicles to integrate Amazon Alexa as an interactive voice service and it will be available by the end of this year in Leon and Ateca and next year in Ibiza and Arona.

At the Frankfurt Motorshow SEAT announces its new integration with Amazon Alexa voice service. The integration between SEAT and Amazon Alexa aims at offering smart solutions and optimizing the driver’s time spent in the car.

With SEAT’s skill for Alexa and its in-car integration, drivers can just ask to find a destination spot, the closest car dealer or a place for dinner amongst other things. And best of all, this is just the beginning, because the evolution of Alexa and its integration into the SEAT range has only just begun.

SEAT’s public voting process to find a name for its large SUV has created great expectations. The initiative #SEATseekingName generated nine proposals that have been selected to name the brand’s future third SUV, which will be going on sale in 2018. The nine place names from all over the Spanish geography, selected among the 10,130 proposals received, which stand a chance of becoming one of the finalists on 12 September are the following:
Abrera -- Alboran -- Aran -- Aranda -- Avila -- Donosti -- Tarifa -- Tarraco -- Teide

The brand is going to present the finalist names during the press conference on 12 September at the Frankfurt Motorshow. From that day until 25 September, everybody aiming to vote for their favourite candidate will be able to do so on seat.com/seekingname and seat.es/buscanombre and the name which receives the most votes will be the winner.

Last but certainly not least, SEAT wants to demonstrate the potential of the Brand with the CNG models. Following on from the successful introduction of CNG models in the Leon and Mii, now it’s time for the New SEAT Ibiza. The new 1.0 SEAT Ibiza TGI will be present in Frankfurt as strong proof of SEAT’s trust in Compressed Natural Gas (CNG) as a clean and efficient fuel. Compressed Natural Gas is the eco-friendly alternative to fill-in the gap between traditional drivetrains and the electric engine. And apart from that, CNG combines the best of both worlds, diesel and petrol, because in this sense, it emits 85% fewer nitrogen oxide emissions compared to diesel engines whilst decreasing CO2 emissions by 25% compared to petrol engines, as well as nearly all airborne particulate matter.

The Ibiza 1.0 TGI will be manufactured on the same production line as the rest of the range thanks to the flexibility enabled by the new modular MQB A0 platform, thus will be subjected to exactly the same test standards such as technical approval, quality control and durability, all with SEAT’s total guarantee and with all the qualities of the new Ibiza range in terms of safety, connectivity, design, comfort, precision and ride quality.

The 1.0 Ibiza TGI has three fuel tanks available; one for petrol and two for CNG; due to the fact that its engine works perfectly with both fuels and gives a total combined fuel range of almost 1,200 kilometers (390 with CNG), with C02 emissions in CNG mode of only 88 g/km. No other technology comes close to the 1.0 Ibiza TGI in terms of fuel range, and when compared with electric vehicles, the driver never needs to worry about running out of battery power or fuel. Available in Style trim, the 1.0 Ibiza TGI boasts low running costs thanks to the lower price of CNG and the fuel efficiency of its engine.