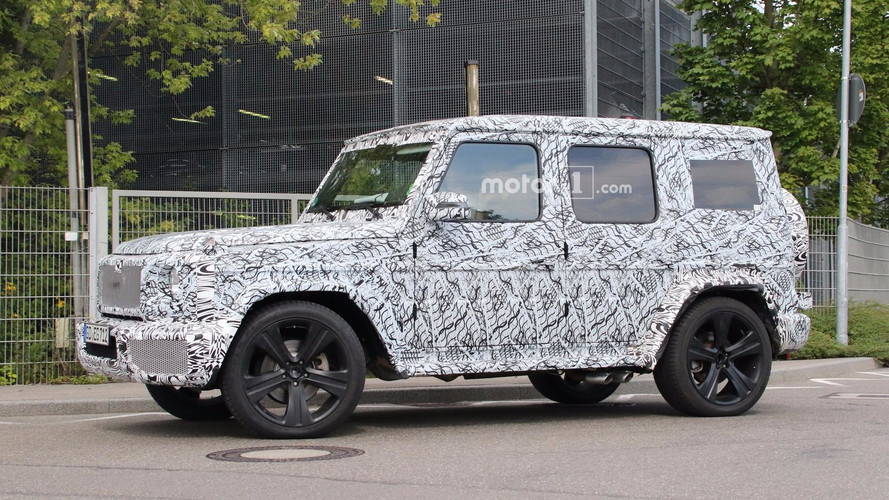 Just the way we like it: boxy and with side exhausts.

Riddle: What looks like a brick on wheels and has been around for close to four decades, yet it’s still hugely desirable? The G-Class aka the big daddy of off-roaders, which will get comprehensive updates sometime next year. Seen here are a few prototypes of the W464-gen model caught out in the open testing in both the standard and AMG versions.

The slightly thinner camouflage applied by Mercedes comes to further reveal the company will live up to its promise to keep the G-Class as boxy as ever. Although it’s hard to tell by looking at these spy shots, we know for sure the body is going to be widened by four inches (10 centimeters) to enable the next generation provide a roomier interior.

Some preliminary technical specifications confirmed by the three-pointed star marque include the usual off-road chops, such as low-range gearing, three locking differentials, and the body-on-frame setup. We also know it’s getting a turbocharged six-cylinder engine and substantially more technology inside the cabin where there might be a digital instrument cluster.

Equipped with side exhausts and riding on large wheels, the AMG version spotted here features old-school halogen headlights whereas the non-AMG model is fitted with an LED setup. The clusters will carry over the round shape and it appears these are going to incorporate the daytime running lights, so the DRL horizontal bars mounted below on the outgoing model will become a thing of the past.

Looking at these two prototypes, the front grille of the lesser trim is partially uncovered as opposed to the AMG’s grille that remains concealed underneath the white mesh also applied over the air vents. Why did Mercedes decide to hide it? It’s likely because the G63 and G65 models are going to receive the menacing Panamericana grille already seen on an SUV, the GLC 63.

While it’s putting the finishing touches on the next-gen G-Class, Mercedes still isn’t done with the current model that has been around since 1990, with a few updates from time to time. We’re talking about the new Exclusive Edition for the AMG duo due in Frankfurt with some styling enhancements.