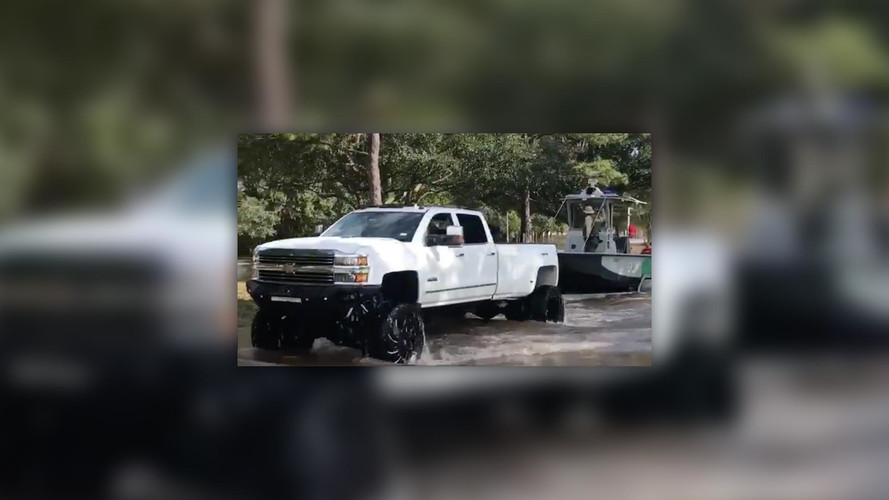 If you don't have a boat, a lifted pickup is the next best thing to get through the water.

Hurricane Harvey has finally started moving northward after dumping massive amounts of rain on the Southeastern United States. The area around Houston, Texas, was particularly hard hit. For example, the Houston Weather Forecast Office reported 43.38 (110.19 centimeters) of rainfall from the storm, according to the National Oceanic and Atmospheric Administration. Even with the storm vacating the area, massive flooding remains, which leaves many people unable to leave their homes. The high water also makes the situation incredibly difficult for emergency crews. Thankfully, some folks with seriously lifted trucks are coming to the rescue.

The group Rednecks with Paychecks Offroad generally organizes off-road events in Texas for folks that want to get their truck or SUV dirty. Members of the group are now using their lifted vehicles to help stranded people in the flood. A video from the organization showing a giant Cadillac Escalade pulling a stuck military vehicle out of the water even gained national news coverage in the United States. (Watch the clip below; the action starts at 4:25)

After helping out in Houston, the crew has moved onto Port Arthur and Beaumont, Texas, which received even more rain. NOAA's data grouped the two towns together and showed them with 47.35 inches (120.27 cm) of rain from Hurricane Harvey.

Members of Rednecks with Paychecks Offroad have been livestreaming their efforts on Facebook throughout the past days, and their videos have provided an amazing look at the scale of the flooding.

Rednecks with Paychecks Offroad has started a GoFundMe campaign to raise donations for its efforts. In three days, the organization has collected $4,304.

There are other folks with lifted trucks trying to help. For example, MMA Fighter Derrick Lewis is assisting people from his lifted Chevrolet Silverado. He has also helped with hauling a rescue boat and pulling out stuck vehicles.

Even CNN news anchor Anderson Cooper has applauded the efforts from volunteers in lifted trucks. He dedicated a brief interview with a pair of them in a recent broadcast.