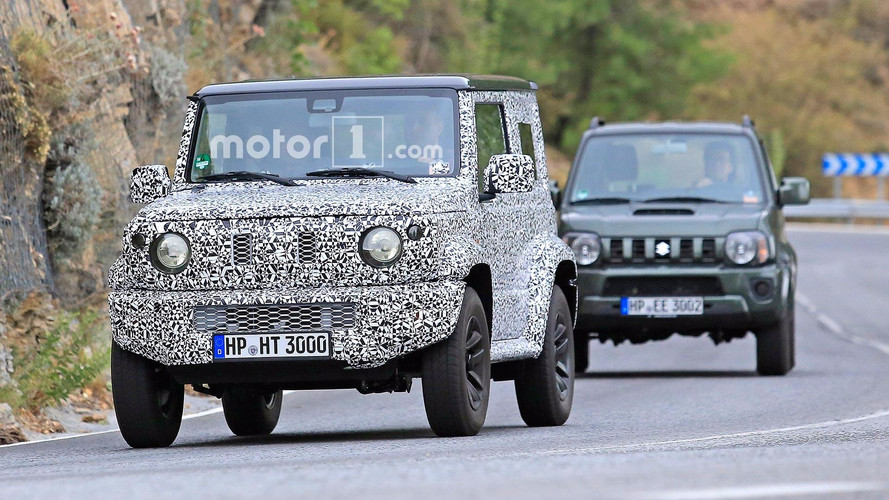 The new Jimny looks bigger than its predecessor but the SUV is no less boxy.

Despite the design for the next-generation Suzuki Jimny already leaking out, the Japanese brand continues to test the tiny, off-roader in heavy camouflage. The latest batch of photos let us see it under development with the current model bringing up the rear. Seeing them both at once provides a perfect opportunity for comparison.

The new Jimny doesn't give up the model's legacy of boxy, rugged styling. It also retains circular headlights, but the turn signals now have their own, tiny lights. A Jeep-like grille with vertical slats still spans the center area between the lamps.

For an extra dash of style, the new Jimny gains a two-tone aesthetic that paints the fenders, roof, front bumper, and (in some cases) the roof in contrasting black or white. Several stylish wheel options are available, too, including some with a retro look that looks fabulous on the little SUV.

Inside, the cabin receives major improvements, too. The new design features a utilitarian, chunky appearance that provides a retro-future aesthetic. Controls with large knobs look like they would be easy to handle, even while wearing gloves. Two large instrument dials sit in front of the driver. The result looks like a great combination of style and the ability to work.

Mechanically, the Jimny should remain quite a rugged by continuing to use body-on-frame construction. Buyers would be able to choose from rear- or all-wheel-drive layouts. Suzuki's Allgrip Pro 4x4 system would likely offer a low-range transfer case for getting out of slippery situations off-road. Engines remain a mystery, but the 1.0-liter turbocharged three-cylinder from the Ignis might be part of the lineup.

Speculation puts the Jimny's debut at the Tokyo Motor Show in October. A premiere in Frankfurt seems unlikely because Suzuki intends to unveil the Swift Sport there.