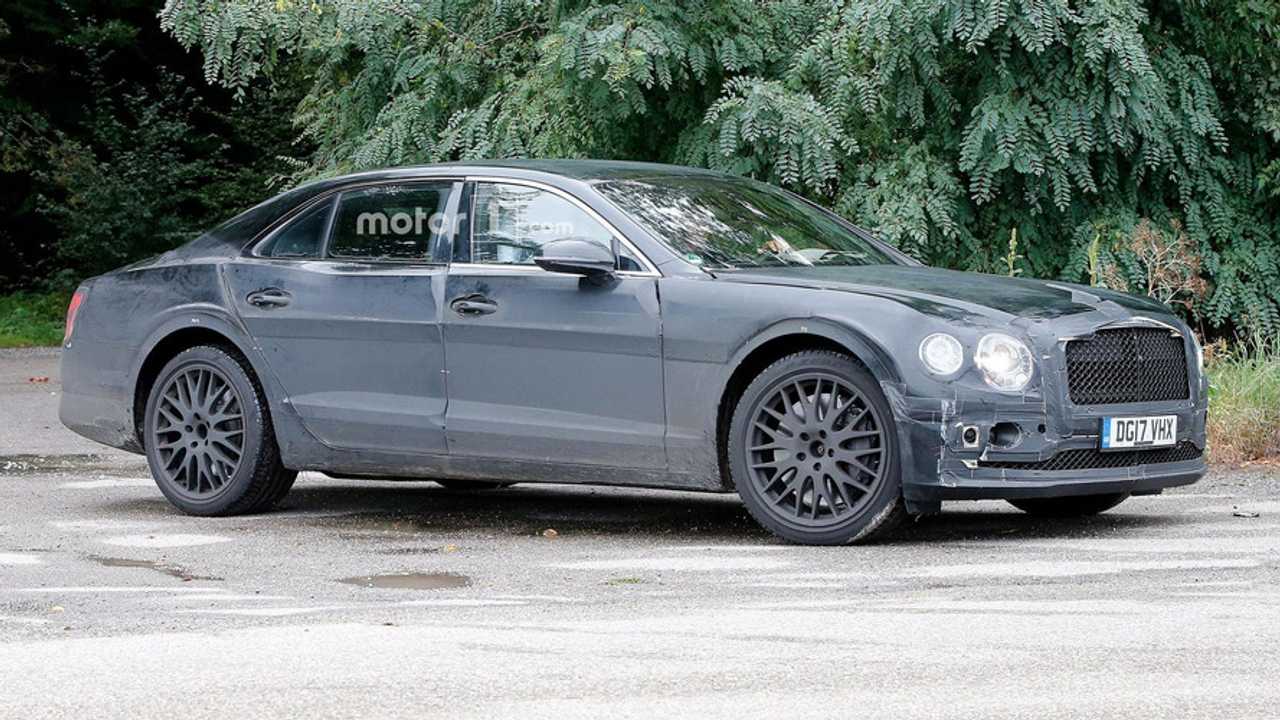 Like a Continental GT, but with two extra doors and a bigger trunk.

Hot on the heels of the Continental GT’s reveal, Bentley was seen testing on public roads its more practical and roomier companion, the Flying Spur. Set to have many things in common with the Porsche Panamera, the stately sedan is expected to adopt the same evolutionary design as its sportier two-door counterpart.

As you can see, the peeps from Crewe were being quite generous with the camouflage as the sides of the car were covered by black tape also used to mask most of the front and rear ends. In typical Bentley fashion, the headlights were hiding behind some fake stickers, but we don’t have to look very far to see the real ones as these will probably be similar to those of the 2018 Continental GT:

Judging by the dotted circular shape of the taillights’ graphics, it appears the prototype had provisional clusters on top of which the British luxury marque slapped on yet more stickers with a design mimicking the rear lights of the previous Continental GT. It’s going to be interesting to see how the EXP 10 Speed 6 concept’s taillights will be applied to the sedan formula.

While spy shots of the interior are not available at the time of writing, the coupe unveiled earlier this week should provide an accurate picture of what to expect from the four-door model. Needless to say, the Flying Spur’s longer wheelbase will grant significantly more rear legroom. If that still won’t be enough, there will always be the bigger Mulsanne and its gargantuan Extended Wheelbase version for those willing to pay the hefty premium.

Like we’ve mentioned in the title, the prototype was being tested with the new W12 already powering the Bentayga and the recently introduced Continental GT. It develops 600 hp in the opulent SUV and 626 hp in the coupe, with both sharing the same 664 lb-ft (900 Nm) of torque. As a side note, the Flying Spur wasn’t supposed to be the only sedan from the Volkswagen Group to be blessed with the latest biturbo 6.0-liter engine as the VW core brand had plans for a new Phaeton with this high-end mill. The fullsize sedan from Wolfsburg is still on the agenda, but it has been delayed until around 2020 because of the Dieselgate and it will likely return exclusively as an EV.

Meanwhile, the next-gen Flying Spur is slated to arrive at some point in 2018 as a 2019MY.