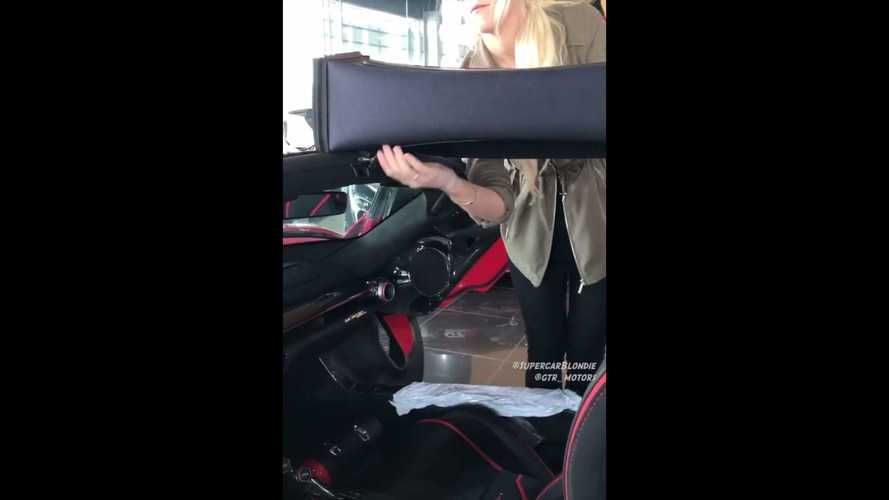 Have you ever wondered what it takes to make the LaFerrari Aperta go topless? Wonder no more as Facebook’s Supercarblondie had the privilege to get acquainted with the rare hybrid convertible from Maranello. Ferrari is making 209+1 units of its fastest droptop ever and this one featured here was unsurprisingly located at a high-end dealer in Dubai where it’s available for a hefty $7.1 million. To our knowledge, Ferrari never revealed the car’s price tag, but there were rumors of a $3.9M sticker, which would mean a staggering $3.2M appreciation in about a year.

Taking off the standard fabric roof is done manually in less than a minute as all you have to do is use the two switches on each side, fold the top, and then pull the lever located on the windshield frame to completely detach it from the car. Since there’s no place to store the folded fabric, it means you will have to leave it at home and pray that it doesn’t rain while you’re out enjoying the multi-million-dollar machine.

When the Aperta (Italian for “open”) was available, Ferrari asked customers whether they would like it with this canvas roof or an optional hardtop made entirely out of carbon fiber to keep the weight gain as low as possible. As a reminder, the company had no problems in selling all cars planned for production as all it had to do is just send a little box to prospect buyers with a Ferrari key and a note, asking them whether they would like to buy the Aperta. All said yes, without even seeing the car in the metal.

The 210th and final Aperta will be built for charity and is expected to fetch a pretty sum considering the 500th coupe raised an impressive $7M, also for a good cause. We will find out on September 9 when the car will be up for grabs at an auction organized by RM Sotheby’s. Our hunch is that it will go for more money than its fixed roof sibling.