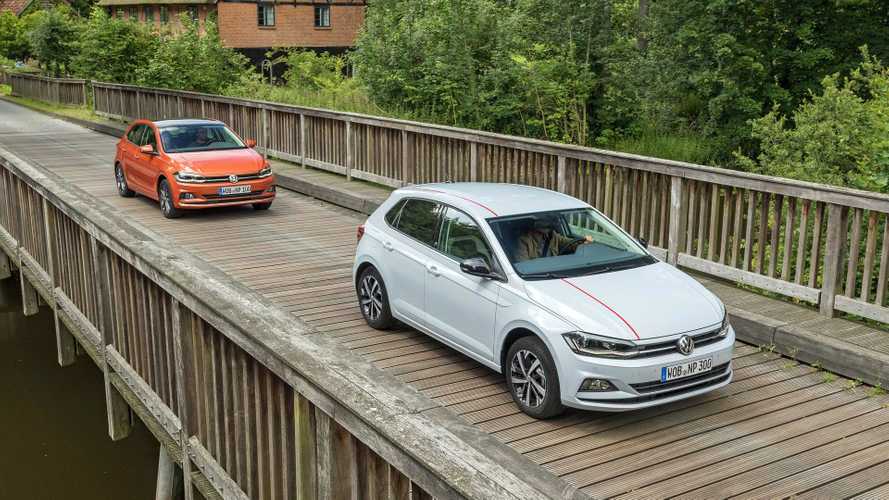 The 200-horsepower GTI will arrive at the end of the year.

Longer and lower than its predecessor, the sixth-generation VW Polo has been developed from the ground up, though the styling on the outside might tempt you into believing it’s merely a facelift of the old one. Like its cousin SEAT Ibiza from sunny Spain, Wolfsburg’s supermini switches to the MQB platform enabling better packaging to create a more spacious cabin. The wheelbase is now 92 mm longer than before (at 2,548 mm) while the trunk’s capacity has significantly been increased by 71 to 351 liters.

Surely there’s a Polo out there for everyone considering VW will offer 14 body paints, eight dashboard colors, three packages, 12 wheel designs, 11 seat covers, two interior trims, and four trim levels: Trendline, Comfortline, Highline, and the Beats special edition. If you can patiently wait, the sporty GTI will go on sale towards the end of the year with a turbocharged 2.0-liter gasoline engine delivering 200 horsepower (147 kilowatts).

The Polo is VW’s first model to take advantage of the second-generation Active Info Display, which is just a fancy way of saying all-digital instrument cluster. Other goodies worth mentioning include full-LED headlights, 300-watt Beats sound system, wireless charging, and the biggest sunroof in its class. It also boasts a plethora of safety and assistance kit inherited from the Golf, along with an optional sporty R-Line appearance package to trick your non-car friends into believing it’s a Polo GTI.

A forbidden fruit in the United States, the all-new VW Polo is already available on order in some European countries. At home in Germany, the cheapest version money can buy costs €12,975.

Sportier, larger, more connected and personalised – the new Polo launches with a digital cockpit for the first time

- Sixth generation Polo to continue success story: With more than 14 million units sold worldwide to date (including derivatives nearly 16.5 million units), the Polo is one of the most successful vehicles in its class.

- Thanks to MQB, Polo sets standards in its class:  Features such as Front Assist, Blind Spot Monitor, ACC, Automatic Post-Collision Braking System and LED headlights are otherwise only familiar from higher vehicle classes.

- First Polo with digital instruments: The second generation of Active Info Display celebrates its world premiere in the new Polo.

- Polo appeals with emotional and charismatic design: : The new exterior is marked by expressive dynamism with a masculine front end.

- The luxury of choice: Trendline, Comfortline, Highline, GTI, Beats and lifestyle packages result in a broad range of versions.

- Attractive pricing: New Polo launches with four doors and Front Assist as standard at a price of 12,975 euros (Germany).

This Polo makes the future real

Progressive compact car. The Polo, which has sold more than 14 million units worldwide, is a giant among small cars. Now a completely redeveloped sixth generation has arrived. Pre-sales of the best-seller have already started in the first European countries. Standard on every model: four doors and the area monitoring system Front Assist with City Emergency Braking and Pedestrian Monitoring as well as the Automatic Post-Collision Braking System. The Polo, which has been upgraded comprehensively, is now less expensive when price-adjusted for added features. For example, in Germany the well-equipped basic model costs 12,975 euros (Polo 1.0 Trendline with 48 kW / 65 PS1). The sixth generation Polo's concept and configuration are a reflection of automotive progress and the new status quo among compact automobiles. Four trim lines form the basis for the new Polo configuration: Trendline, Comfortline, Highline and Beats (which includes a 300-watt sound system). Following on from these, towards the end of the year will be the next Polo GTI2.

Three high production volume engines at market launch. Customers of the sixth generation Polo will, in time, be able to  choose from a total of nine efficient petrol, diesel and natural gas engines. The three powerplants that can be ordered at market launch are three-cylinder petrol engines at the three most popular output levels: two 1.0 MPI engines, one with 48 kW / 65 PS1 and the other with 55 kW / 75 PS3 as well as a turbocharged 1.0 litre TSI with 70 kW / 95 PS4. All models are equipped with a stop-start system and a regenerative braking mode. It is possible to combine a dual clutch gearbox (DSG) with any engine with a power output of 95 PS5 or more. Another important aspect for buyers of the new Polo who drive it in personal or business use is that all three engine versions offered at market launch attain best-in-class figures for comprehensive insurance classifications and cost of ownership.

Six more engines by the end of the year. Six additional engine options will be introduced in stages by the end of the year: three petrol, two diesel and one natural gas engine. The petrol engine range will be completed by a 1.0 TSI with 85 / 115 PS2 and the further developed 1.5 TSI ACT with 110 kW / 150 PS2 and Active Cylinder Management (cylinder shut-off). The top petrol engine will also follow by the end of the year: a potent 2.0 TSI with 147 kW / 200 PS2 in the Polo GTI. Another new development is the first natural gas engine of the Polo: the 1.0 TGI with 66 kW / 90 PS2. The engine range will be rounded out by two efficient diesels: the two 1.6 TDI engines deliver 59 kW / 80 PS2 and 70 kW / 95 PS2 respectively.

Expressive design. The sixth generation Polo has been designed on the modular transverse matrix (MQB) vehicle platform. This offers the ability to create significantly more dynamic proportions with a long wheelbase, short body overhangs and a sporty ratio of its key dimensions (longer, wider, lower overall height but improved headroom). The design has been made more powerful, masculine, charismatic and expressive than previously. This has resulted in a completely new vehicle.

Avant-garde interior. Designers also gave the interior an expressive and avant-garde flavour. It is an interior without precedent, developed for the digital era. The Polo is the first car in its class to offer fully digital instruments – the Active Info Display – as an option. The instruments are arranged on the same viewing, with infotainment system displays up to 8.0 inches in size (which, on top versions, are glass-encased). Digital interfaces for smartphones allow easier access to their apps and various online services on board. Not only can smartphones be charged by wire, but also wirelessly (inductively) as an option. Interior dimensions of the sixth generation Polo are also much larger. As a result, the car offers more space for five occupants and a boot volume that has increased significantly from 280 to 351 litres.

Four equipment versions and three packages. The new Polo is launching in the three trim core lines: Trendline, Comfortline and Highline, and as a 'Beats' special edition. The Polo Beats brings a 300-watt sound system and various customised features on board that were developed jointly by Volkswagen and US-based audio specialist Beats. Another version heading towards the starting flag is the Polo GTI, which will follow at a later stage. Even the base version, the Trendline, is well equipped: now included as standard are such features as rear doors, LED daytime running lights with Coming Home function, a speed limiter, the Automatic Post-Collision Braking System and the Front Assist area monitoring system with City Emergency Braking and Pedestrian Monitoring.

Systematically designed to offer choice. Everything becomes more colourful and personalised in the new Polo with a large range of fresh new colours (a total of 14 exterior colours) and twelve wheels (14- to 18-inch, some painted in contrasting colour), dashpads in eight different colours, two interior trim versions and eleven different seat covers. The further range of personalisation options is nearly limitless. These include contrasting coloured roofs; the largest panoramic sunroof in its class; full-LED headlights; LED tail light clusters; an R-Line package and features such as a 300-watt sound system from Beats and wireless charging for smartphones (optionally including an inductive aerial connection). In addition, the new Polo impresses with assistance systems, some of which have been adapted directly from the Golf and Passat.

The new Polo is the first model to be based on the new Volkswagen brand strategy: "We make the future real"