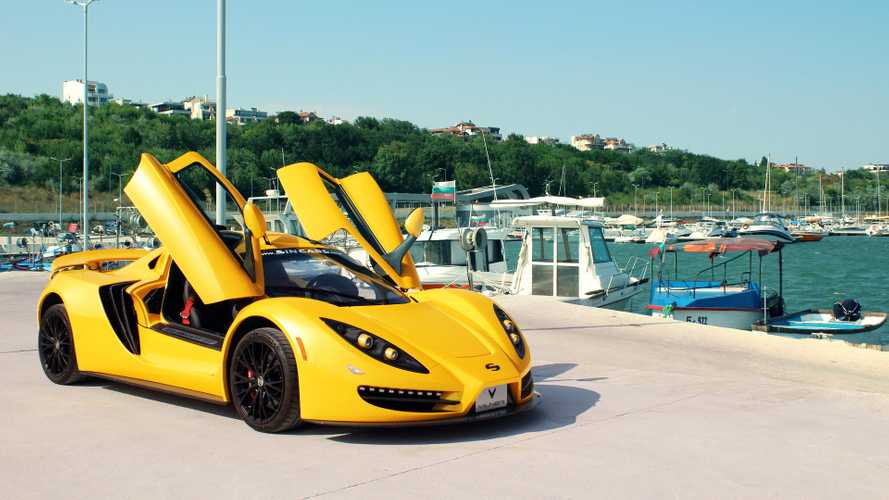 "Leather" and "carbon" are the key words for this Bulgarian joint effort.

Sin Cars and Vilner got together to tweak the latest version of the R1 supercar, which had its global debut earlier this year at the Geneva Motor Show. With an exterior design mimicking pretty much a spaceship, the R1 550 was in need of an equally impressive interior, which it received thanks to an abundance of leather and carbon fiber applied all over the cabin.

The entire interior customization project took less than two months to complete and Vilner had to start from scratch as it received the R1 in its basic form – covered in naked carbon fiber without any sort of trim pieces or other add-ons. The lightweight material is being used just about everywhere inside, including for the center tunnel, dashboard, door panels, and even for the ceiling. Not only that, but the body-hugging seats are from carbon fiber as well.

By combining two-tone leather and Alcantara with the standard bare carbon surfaces, Vilner and Sin Cars are saying the cabin’s quality is now on a par with that of a Pagani, be it a Zonda or a Huayra. The Bulgarian flag above the digital dash is a nice touch, as are the “Sin Cars” engravings on the bolts and the gated shifter for the six-speed manual.

That gearbox has to handle 550 horsepower and 650 Newton-meters (479 pound-feet) of torque coming from a naturally aspirated 7.0-liter V8 engine. It channels the Corvette LS7 power to the rear wheels in a supercar that weighs as little as 1,250 kilograms (2,755 pounds) thanks to its low-fat diet high on carbon fiber.

"Pagani" quality from Vilner inside the Bulgarian supercar Sin R1

As a Bulgarian manufacturer of supercars it may seems obvious for Sin Cars to choose the best local partner, a name that's world famous for making a top quality interiors. But oddly enough Vilner wasn't the first choice for cooperating with Sin Cars – several years ago other Bulgarian atelier was trusted to do the interior of the Sin R1. But the results back then were far from the requirements and expectations of Mr. Rossen Daskalov, the founder and CEO of Sin Cars, so he turned to Vilner for good.

The schedule was tight. Vilner had less than two months before the 87th Geneva International Motor Show. But that was nothing new for the experienced Bulgarian team. Vilner already works close with other world famous exotic car manufacturers like the Spanish AD Tramontana and Rimac Automobili from Croatia. So designing and putting together a whole custom interior for a short time was challenging, but not something unfamiliar for Vilner and his artists.

The car was brought to Vilner in a form of pure naked carbon. The dashboard, the central tunnel, the door covers, the ceiling and even the Sin's seats are made from carbon composite and they came into the workshop with nothing over that strong and light material. It took several days for finalising the design but the toughest area were the seats. They should be comfortable, supportive and last but not least – to be equally nice to look at as they're to sit in. Just to be sure that everything is as good as it should be, several prototypes were tested even on the track - different designs with different amount of foaming and leather/Alcantara combinations.

Fine leather and Alcantara were used for all the parts and areas of the cockpit – even the R1's floor is wrapped in Alcantara with contrast stitching in red. Between the bare carbon and that black Alcantara on the top, Vilner inserted a special insulation that makes the surface much nicer to touch. The steering wheel is another component that should be ergonomically thought out as well pretty to look: ring partially wrapped in fine leather with the carbon fibre inserts made from Sin Cars left for contrast. Extremely nice and notable piece of the cockpit is the fire wall. Here it's also made from carbon fibre composite which Vilner wrapped in red leather and Alcantara. The effect is like the seat's backs casts a colourful shadows on the fire wall.

The dash binnacle is another piece of art: the structure is again carbon fibre but there is a leather strip with contrast stitching on the top of it and a bit of a surprise under it. There's the Bulgarian national flag made out of Alcantara which can be seen only if you lean down. That kind of detailing and combination of the technical look of the carbon fibre with the natural leather and Alcantara feel we're used to see from Pagani. You can also see ''Sin Cars'' engraving on the bolts inside, just like Horacio does for the Zonda and Huayra. Oh, and there are the five-point harnesses in red as a final touch for this street racer.