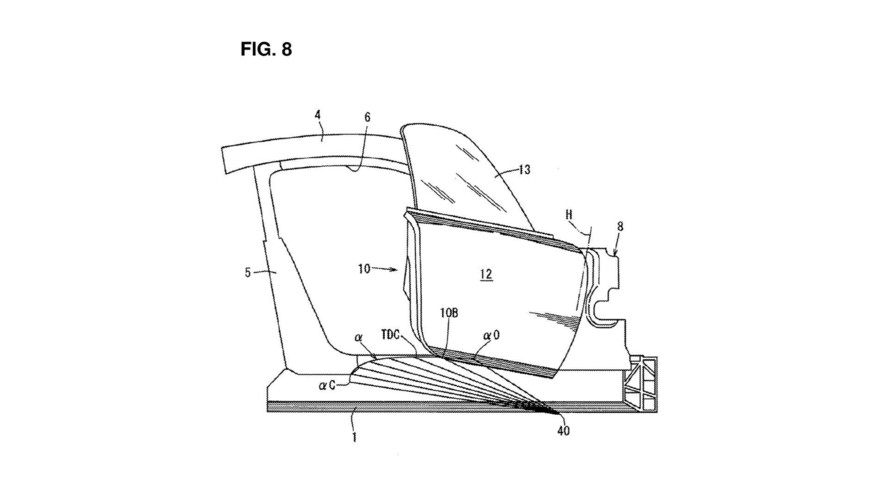 This would be a novel design detail for a future sports coupe.

Mazda allegedly intends to debut the RX-9 rotary-powered sports coupe at the Tokyo Motor Show in October, and new patent from the automaker might offer a hint at the model’s doors. The design mixes a conventional hinge with an upward sweeping layout. The result is a vastly less extreme version of what’s on vehicles like the Mercedes-Benz SLR or modern McLarens.

According to Mazda, low-slung performance cars have an issue where the opening door can hit the curb. The company’s plan is to create a hinge that opens out and upward. By itself, this isn’t a new idea, but the automaker intends to simplify the standard mechanism.

Mazda’s solution is to use a torsion bar to hold the door in place when fully open. The “torsional energizing force” in the bar would make closing the door easier.

Manufacturers generally use a gas strut for holding a vertically hinged door open. According to Mazda’s patent, this method “is relatively large-scale, heavy and expensive.” A coil spring is also an option, but “it has substantially the same scale as the gas damper and its energizing range is difficult to expand,” according to the documentation.

The RX-9 allegedly uses a newly patented rotary engine design that turns the layout 180 degrees from the powerplant’s traditional applications. It might also take advantage of Mazda’s Spark Controlled Compression Ignition system. The powertrain would potentially make in excess of 400 horsepower (298 kilowatts). The styling would likely take significant cues from the 2015 RX Vision concept, and the curb weight could be around 2,866 pounds (1,300 kilograms) to 2,976 pounds (1,350 kg). Unfortunately, these tantalizing details are still only rumors for now.