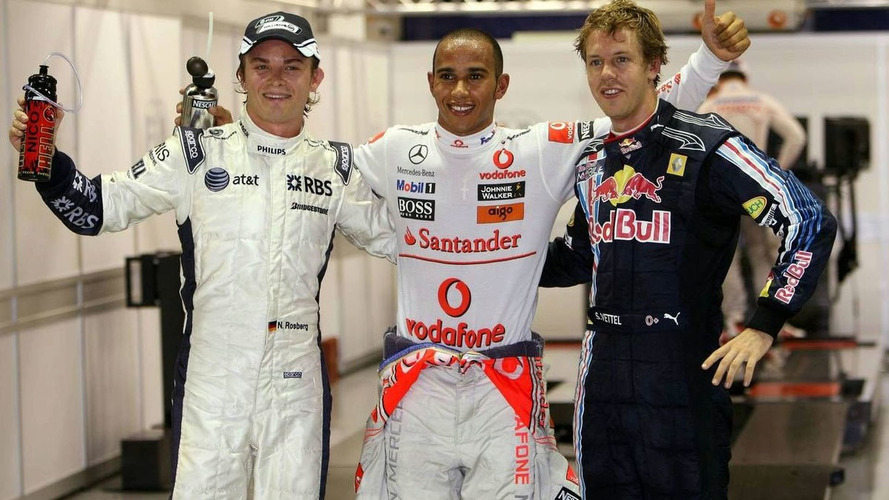 Lewis Hamilton has pole, but the Red Bull drivers are emerging as the real favourites for victory in Sunday's Singapore grand prix.

Lewis Hamilton has pole, but the Red Bull drivers are emerging as the real favourites for victory in Sunday's Singapore grand prix.

German Sebastian Vettel, who drives for Red Bull, was on a lap with pole position potential when the red flags flew in Q3 for Rubens Barrichello's late crash.

"It was my first run on new tyres," he rued of the aborted lap.

Team boss Christian Horner said Mark Webber, ultimately fourth on the grid, was also on a quick lap when the Barrichello incident halted the crucial moments of qualifying.

"Both our guys were on really strong laps and we felt we could lock out the front row today," he said.

Horner told Italian television that he thinks Vettel's pole margin over Hamilton would have been at least two tenths.

It was suspected that Vettel, 22, qualified with more fuel than Hamilton's McLaren, but when the weights were confirmed by the FIA in the wee hours of Sunday morning, it emerged that Vettel will in fact stop about three laps before Hamilton at the end of the first stint.

Another frustrating element of the late red flag for Vettel is that he wasted a lap of his lower fuel load on the aborted lap, while pole sitter Hamilton did not.

Said Mercedes' Norbert Haug: "I am sure that it would have been close, but I am also sure that Lewis would have gone faster as well."