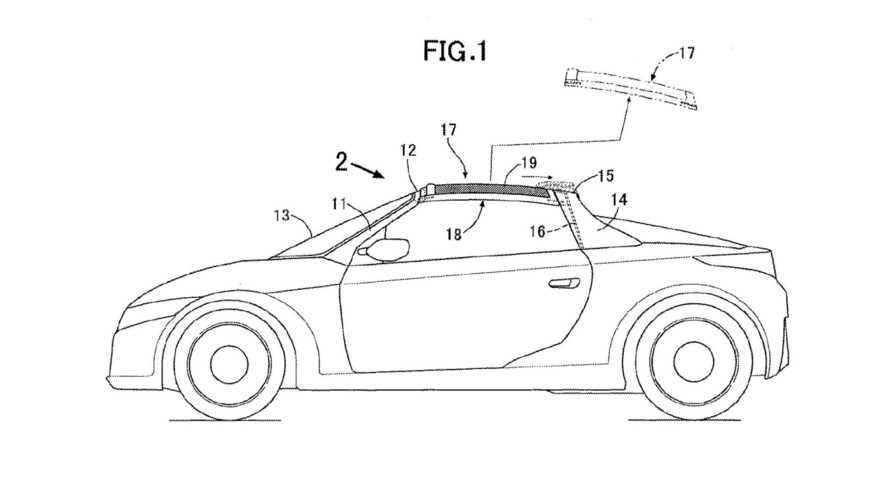 One more piece of evidence that Honda is contemplating smaller, sporty model.

Honda is amassing a collection of patents and designs that would seem perfect for a little sports car. The latest addition to these ideas is what the company describes as a “roof structure for targa top vehicle.” The illustrations for this concept appear to show the removable top on a Honda S660 kei-class roadster.

Honda’s plan is to “achieve a balance between an open feel of a Targa top vehicle and convenience of simply opening and closing an opening of a roof,” according to the patent. The document describes a canvas panel with a metal frame that would attach to the top of the windshield and to a point behind the occupants.

The company says that either a motor would slide the canvas out of the way or an occupant could do it manually, depending on how Honda implements the idea. This allows for a quick switch to open-air motoring and still lets someone button up the top, like if it suddenly starts to rain. According to the automaker, this concept also removes the necessity for having a place for storing the roof if the owner detaches it.

Honda has performance in mind, too. “In a case in which it is desired that the vehicle dynamic performance is exhibited to the maximum such as when driving on a circuit, the entire roof unit can be detached, thus lightening the vehicle body weight,” the company wrote in the patent.

Since the illustrations seem to show a vehicle like the S660, Honda might be working out an idea to improve its roof. The little model has a removable top, but a person needs to be outside the vehicle to take the piece off.

Sporadic rumors suggest Honda wants to add a sports car to its lineup that would sit below the Acura NSX’s six-figure price. For example, spy shots show the company pushing around a mystery roadster prototype (above). Plus, two recent design registrations reveal the automaker considering cabin designs for a performance vehicle.