Check Out These Cars Reimagined As College Football Teams 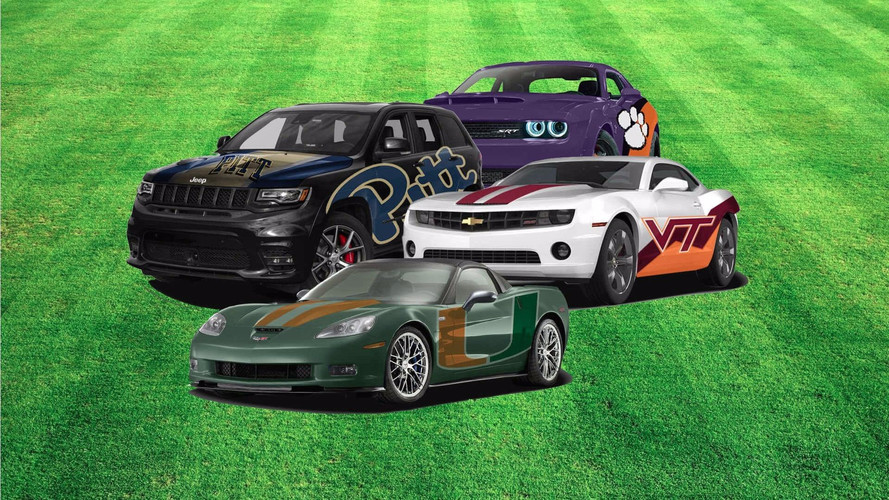 Do you agree with the automotive choice for your favorite alma mater?

Who’s excited for college football season? The guys at CJ Pony Parts certainly are, as they embarked on an interesting task to match college football teams to cars. Sure, any photoshop guru can whip up some neat renders of cars wearing college colors, but as you browse the photo gallery below, you’ll see there’s a bit more to this effort than just a splash of color.

Rather than simply dumping a random car with a random team, the CJ Pony Parts crew took a close look at all the NCAA Division I teams. Through a process that we can only imagine was as painstaking as it was amusing, each team was paired with a car that, at least in some measure, seemed appropriate for both man and machine. Each of the Power Five conferences are represented, with vehicle choices based on either the 2016-2017 season or the team’s history.

We have to give credit where credit is due, because these choices generally seem well-rounded and surprisingly appropriate. Kudos for thinking outside the box as well, such as the bumper car for Boston College, and the Snowcat for the University of Kentucky. Being a Michigan-based company, Motor1's attention naturally goes to the Big 10 and the Michigan / Ohio State rivalry, which is both appropriately and hilariously represented by a Chevrolet Camaro and a Ford Mustang.

Some other choices are a bit baffling, such as the pirate ship for Washington State, or the Nissan 370Z representing the Georgia Bulldogs. Then again, neither team is part of the Big 10, so they don’t matter anyway. Shots fired!

We’ve got all the Division I teams in the photo gallery, or CJ Pony Parts has a convenient infographic for each conference at the links below. Do you agree with these automotive parings, or does your favorite team deserve a different four-wheeled (or in some cases, tracked) doppelganger? Let the rivalries begin!