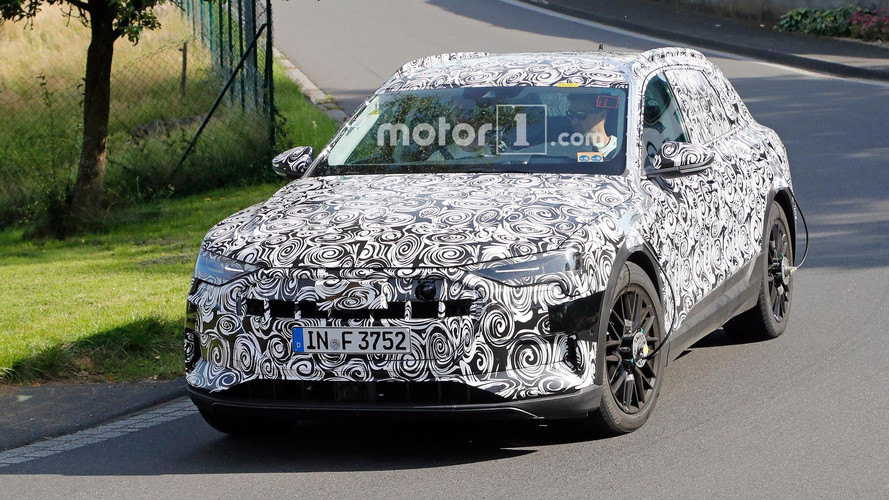 A new batch of spy photos indicates that Audi wants to be sure that the E-Tron Quattro electric crossover can perform in addition to being efficient. The pictures catch the sensor-laden EV at the Nürburgring and even show the driver sliding the tail.

Being a capable performance vehicle is important for the E-Tron Quattro because the Tesla Model X is its prime competitor. Making the challenge even higher, Elon Musk recently touted hits electric crossover’s ability to beat a Lamborghini Aventador SV in a drag race.

This E-Tron Quattro test mule looks the same as the previous development models. The only major change is that this one has sensors on each corner for monitoring the powertrain’s performance. Aesthetically, the example testing here also wears multi-spoke wheels rather than the previous five-spoke units.

The E-Tron Quattro will use a 95-kilowatt-hour battery from suppliers LG Chem and Samsung SDI, and it’ll provide an estimated range of 311 miles (500 kilometers) in the New European Driving Cycle (NEDC) standard. At least in the concept, the crossover uses three electric motors ­­­– two at the rear and one in the front – with a total output of 435 horsepower (320 kilowatts). However, a temporary boost can take the output to 503 hp (370 kW).

Audi will begin producing the E-Tron Quattro in 2018 at its factory in Brussels, Belgium. About a year later the company will add the E-Tron Sportback to the lineup, and the vehicle should come from the same plant. It’ll feature an arching roof and steeply raked rear end. Later, the firm will also add an electric sedan and city car to broaden the EV lineup.