Ariel Is Working On A 1,180-HP Electric Hypercar [UPDATE]

It should be able to sprint to 60 miles per hour in just 2.4 seconds.

Ariel may be best known for its long-loved Atom track toy, or its equally enticing Nomad off-roader, but the British marque is setting out to prove it isn’t just some two-trick pony. New reports suggest that the company is in the process of building a world-beating, 1,180-horsepower (879-kilowatt) electric hypercar. Color us intrigued.

According to Autocar, the proposed hypercar would be a two-seat, four-wheel-drive EV with a unique turbine range extender powertrain. That type of performance would allow it a sprint to 60 miles per hour (96 kilometers per hour) in just 2.4 seconds, and on to 100 mph (160 kmh) in just 3.8 seconds. Production is slated to begin in 2020.

The chassis and powertrain will be the result of a three-company co-operative project called Hipercar – an acronym for High-Performance Carbon Reduction, supported in part by the British government. Ariel is calling its proposed vehicle, "tomorrow’s supercar today," and most though details remain slim on the project, we do know that the chassis and powertrain setup could be revealed as early as this month. 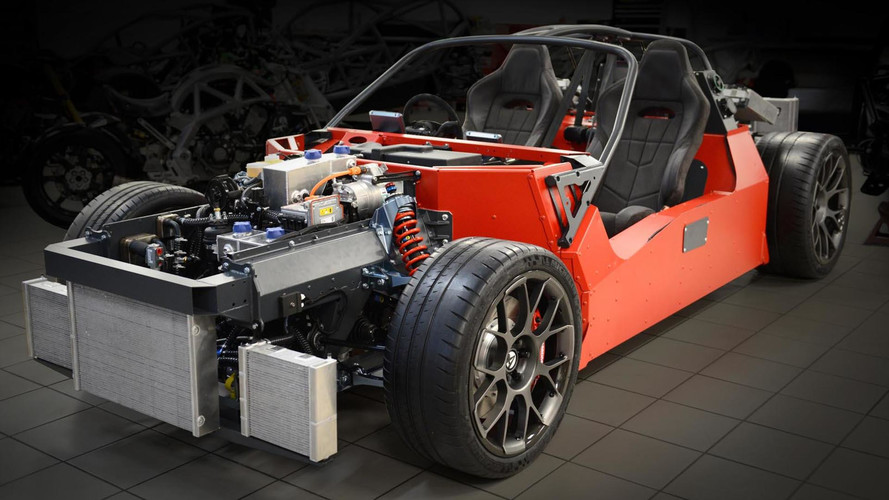 The hypercar is codenamed the P40, and will be powered by four electric motors, each one producing a respectable 295 hp (219 kW). A centrally mounted 42 kilowatt-hour liquid-cooled battery will be at the heart of the vehicle, with power being routed to all four wheels. A lighter, less-powerful rear-wheel-drive option will reportedly be introduced later down the line with a 56 kilowatt-hour battery.

Both models will come equipped with a turbine range extender, producing a maximum output of 35 kilowatts. The turbine will be placed atop the two rear motors, and will allow for 100 to 120 miles (160 kilometers to 193 kilometers) of range. The hypercar will reportedly be able to race around the track for 15 minutes before needing to recharge for at least 50 minutes.

"We’re building tomorrow’s aspirational car using our small-company agility to beat the big companies," said CEO Simon Saunders in an interview with Autocar. "We love the Ariels we make now, but we know we have to embrace new technology. If we don’t, in 20 years we’ll be making antiques, and we could even be legislated out of existence." More details on the upcoming Ariel P40 will be available later this month.