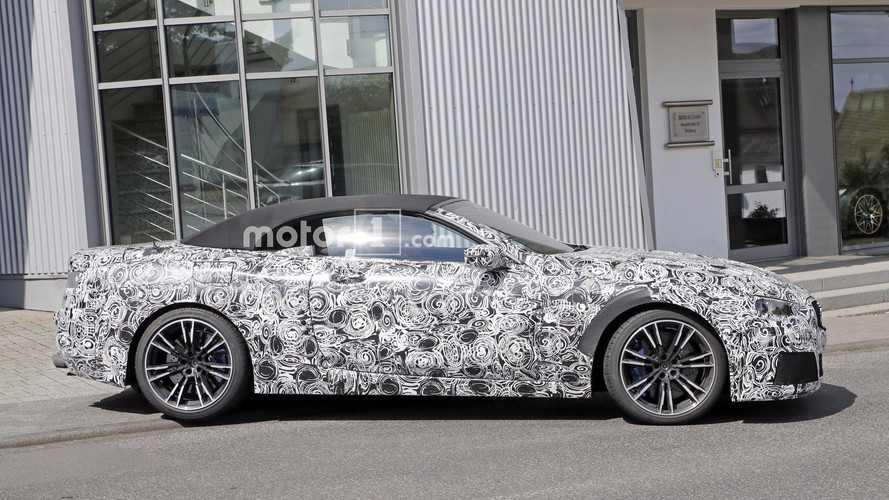 A fresh new batch of spy photos has just arrived, depicting a prototype of the 2018 BMW M8 Convertible. We've already seen the Bavarian company testing the 8 Series and the M8 Coupe, and this is the first time the most powerful cabriolet from the new 8 Series range is caught out testing.

At the front, the convertible is virtually identical to the hardtop M8 prototypes our photographers have already spied. Interestingly, the position of some of the radars and sensors has been changed, but this could be a temporary solution due to the different shape of the bumper. Other than that, everything here already seems familiar.

Naturally, the cloth folding roof brings some changes to the rear window, which is significantly smaller on the convertible compared to the coupe. Also, the roofline appears to be more gently sloping on the hardtop variant, but the overall shape is similar.

At this point, there are rumors for two potential engine options for the M8 and its convertible sibling. According to some publications, the vehicle will use the revised 4.4-liter V8 biturbo engine of the all-new M5 that was revealed yesterday. If this turns out to be true, then expect to see the same power of 600 horsepower (447 kilowatts) between 5,600 and 6,700 rpm, and 553 pound-feet (750 Newton-meters) of maximum torque.

However, some sources claim it might get a turbocharged V12 with more than 600 hp (447 kW). We stay sceptic on this information until we see something official or manage to obtain leaked details.

The M8 is still in the early stages of development. BMW says “the conception and development of the standard BMW 8 Series and the M model run in parallel,” but don’t expect to see the M8 and M8 Convertible before the end of next year or early 2019. The standard 8 Series should be the first to arrive in the last months of 2017.