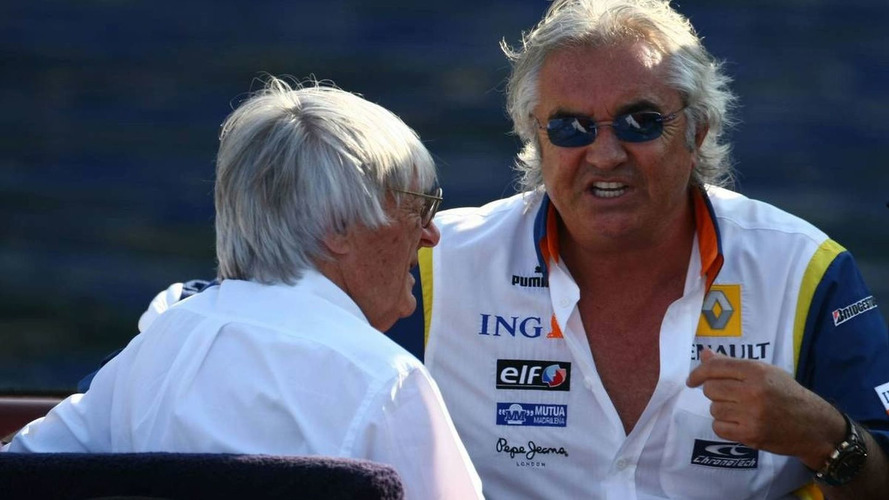 Bernie Ecclestone on Thursday urged his friend and business partner Flavio Briatore not to take his gripe against the FIA to the civil courts.

Bernie Ecclestone on Thursday urged his friend and business partner Flavio Briatore not to take his gripe against the FIA to the civil courts.

Briatore, the ousted former Renault boss, was banned from motor sport for life by the World Motor Sport Council, while his more apologetic co-conspirator Pat Symonds can return to F1 in five years after admitting his role in the crash-gate scandal.

At an event in Singapore, F1 chief executive Ecclestone accused Briatore of handling "the whole thing badly" by not confessing or apologising.

Briatore, 59, is quoted by Italy's La Repubblica newspaper as vowing to legally contest the decision, and "at the end when I have won I will have a big party".

"I will invite all of those people who are close to me in this difficult time," he added.

Ecclestone, in business with Briatore with the London football club Queens Park Rangers, revealed that the flamboyant Italian is not currently talking to him because of a supposed lack of support amid the saga.

And he urged Briatore to keep the matter out of the ordinary courts.

"It would be stupid of Flavio to do that. He should ask to be heard by the (FIA's) Court of Appeal," Ecclestone added.

"If he goes to a civil court I don't think he would win. Because the FIA would have to defend and somebody will say that he sent a young guy out to what could have been to his death. So it wouldn't go down too well."