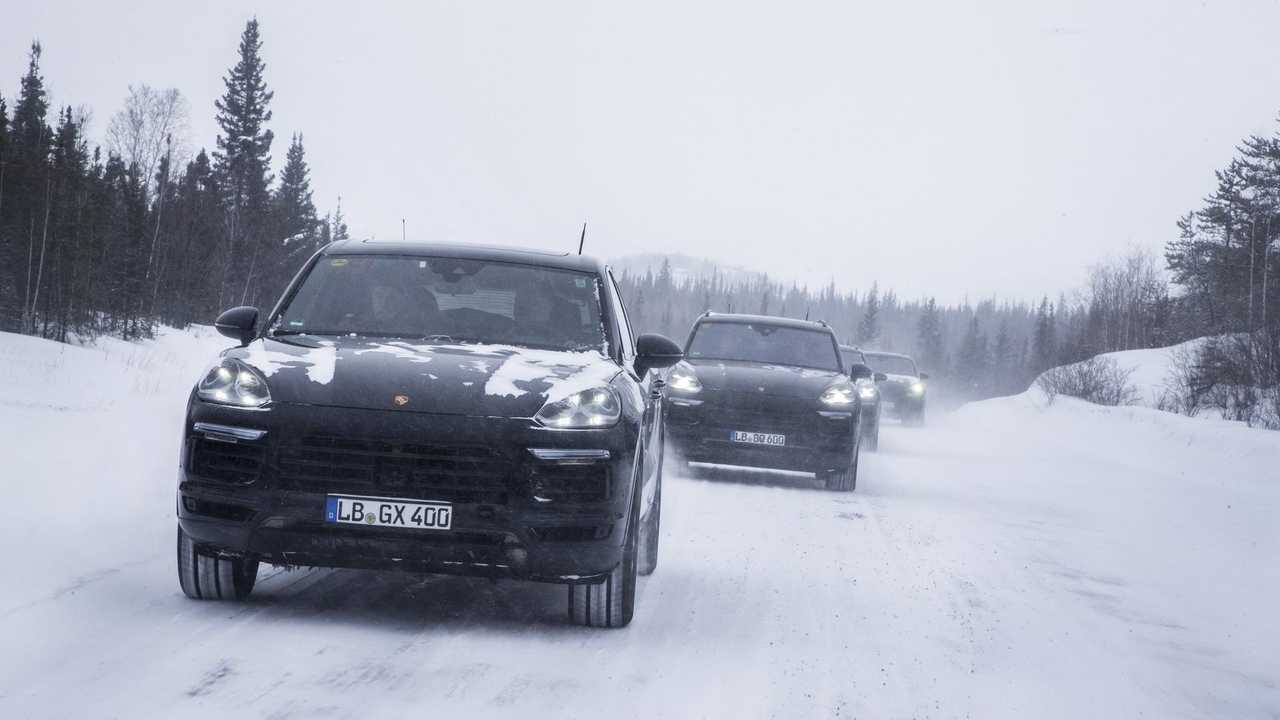 Save the date: reveal scheduled to take place on August 29.

The 2017 Frankfurt Motor Show is fast-approaching, so naturally more and more automakers are kicking off teaser campaigns for their IAA-bound vehicles. Porsche’s main star in Germany will be the third-generation Cayenne, a nameplate which has been around since 2002. During this interval, more than 760,000 units have been delivered, so it goes without saying the SUV is a vital model in the company’s growing lineup.

Ahead of a full reveal scheduled to take place on August 29, the Cayenne is making today’s headlines through a series of images and a video accompanied by some juicy details about the grueling tests it had to endure. In total, prototypes and pre-production vehicles covered a combined 4.4 million kilometers (2.73M miles) in various conditions and with temperatures varying from -45 to 50 degrees Celsius (-49 to 122 Fahrenheit). Not only that, but the all-new Cayenne was also subjected to virtual simulations as well as testing in the real world, which at Porsche represents the final examination for every new model.

To ensure a high level of quality for the final production model, the Stuttgart-based marque mentions it has come up with extreme tests that are highly unlikely to occur in real life. In addition, some of the prototypes actually covered up to 240,000 km (149,130 miles) in a matter of months on country roads, motorways, as well as on city streets.

Developed under the “E3” codename, the 2019 Cayenne is being billed as a completely new vehicle, one that was tested in various locations, including (but not limited to) Alaska, Death Valley, Dubai, Sweden, Finland, New Zealand, Japan, and South Africa. Of course, it was also put through its paces on several tracks, including at the high-speed Nardo circuit in Italy and at home in Germany around the Hockenheimring and especially on the challenging Nordschleife.

Set to feature an evolutionary exterior design combined with a Panamera-derived interior, the third-gen Cayenne will switch to the MLB Evo platform used by the Audi Q7, Bentley Bentayga, and the forthcoming new U.S.-forbidden VW Touareg. A massive weight loss is expected, as is a flagship Turbo S E-Hybrid with close to 700 hybrid horsepower.

Following its online reveal in a week from tomorrow, the new Porsche Cayenne will celebrate its public debut in September at the Frankfurt show and should go on sale in Europe before the year’s end. The U.S. will probably have to wait until the first half of 2018.

Hot and cold: Global endurance test for the new Cayenne

Stuttgart. The third generation of the Porsche Cayenne is in the starting blocks. The new edition of this successful model, which has achieved more than 760,000 sales since 2002, has undergone a complex and challenging series of examinations. Taking place across the globe and under extreme conditions, the tests ensure that the SUV meets the highest quality requirements set by Porsche. In conditions ranging from minus 45 degrees to plus 50 degrees, the prototypes and pre-series vehicles complete a total of around 4.4 million test kilometres.

Porsche is celebrating the world première of the new Cayenne on August 29, 2017. The vehicle is a complete redevelopment. The drive and chassis as well as the display and control concept have been redesigned to further increase the spread between sportiness and comfort. The main objective of the elaborate testing process is to achieve a perfect balance between the many components, some of which were developed especially for the Cayenne. For the new Cayenne generation – referred to as E3 within Porsche – this process began as far back as 2014 with the unit carriers and has continued to this day with prototypes and pre-series vehicles. In addition to increasingly accurate virtual simulations, testing under real-life conditions is still highly valued at Porsche and represents the final examination for every new model produced by the Stuttgart-based sports car manufacturer.

The full vehicle test is implemented to harmonise the interaction of all individual components and to test operational stability and functionality in customer-oriented operation. The aim is always to meet the highest quality demands at Porsche. Specifically, this process includes tough endurance tests on Hydropuls units, a hydraulic testing facility that applies artificial vibrations to both the chassis and body. The range of tests also covers realistic operational stability tests on and offroad at the Porsche test site based at the Weissach development centre or endurance tests inside and outside the test site. A vehicle life is simulated under conditions that are so tough, they are unlikely to ever occur once the vehicle is owned by the customer. Under everyday conditions in urban traffic, on country roads and on the motorways, the vehicles cover up to 240,000 km within a few months in shifts.

To simulate extreme stresses, the prototypes of the new Cayenne are being tested all around the world, including on race tracks traditionally used by Porsche to test all its models: In Germany, the Hockenheimring and the especially challenging Nürburgring-Nordschleife are used. In Italy, the test cars are put through their paces in continuous operation on the 12.6-km high-speed track at Nardò. The materials, sensors and electronics have to prove their quality and durability in different climate conditions – at up to plus 50 degrees Celsius in the sand dunes of Dubai (UAE) and on dusty slopes in Death Valley (USA) as well as at up to minus 45 degrees Celsius on ice and snow in Alaska (USA). The third generation of the Cayenne also had to endure the stop-start traffic in the hot and humid conditions of Chinese cities, master test tracks in Sweden, Finland and Spain, and was transported to South Africa, Japan and New Zealand to complete extensive on and offroad testing.