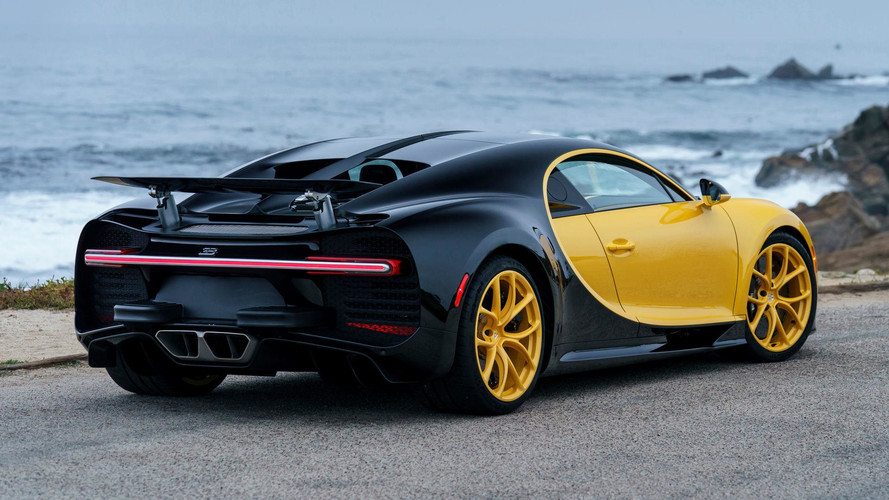 The $3 million, W16 Bumblebee looks epic even with those ungainly rear protrusions.

Less exclusive than the Veyron limited to 450 units, the Chiron will be produced in 500 examples and Bugatti is now showing off the very first car built for a customer from the United States, which accounts for nearly 30% of all orders making the U.S. the model’s second biggest market. Factor in all the applicable taxes, duties, charges, and shipping costs, you’re looking at a hypercar that costs $2,998,000 before adding any options.

Being a U.S.-spec Chiron, it means the yellow & black W16 machine has been fitted with the mandatory side markers and those rear bumper pads providing protection against low-speed collisions. Let’s just say we’re not big fans of the latter, but we could easily live with them should we win the lottery and buy one of the remaining Chirons.

Speaking of how many are still up for grabs, Bugatti is happy to report more than 250 units have already been sold, following the production model’s debut in March 2016 at the Geneva Motor Show. The high-powered beast is turning out to be significantly more popular than its predecessor, which needed a decade and countless special editions to find 450 people willing to buy what is still today the world’s fastest production car (in the Super Sport World Record Edition guise).

Bugatti estimates it will assemble up to 70 Chirons this year, so based on this number, production will come to an end around 2024. As for this first U.S.-bound car presented at Pebble Beach, its yellow and black color scheme applied onto the body is complemented by the yellow appearance of the “Classique” wheels, horseshoe emblem, as well as the side line. It’s a similar story inside where the two-tone theme continues with Beluga Black and yellow leather.

Enthusiasts are now waiting for 2018 when Bugatti will attempt to take down its own record for the fastest, street-legal production car in the world. Early estimations are indicating the Chiron should be able to do a little over 280 mph (450 kph) with the current tires. Fitted with more advanced rubber, it might just hit the magical 300-mph (483-kph) mark.