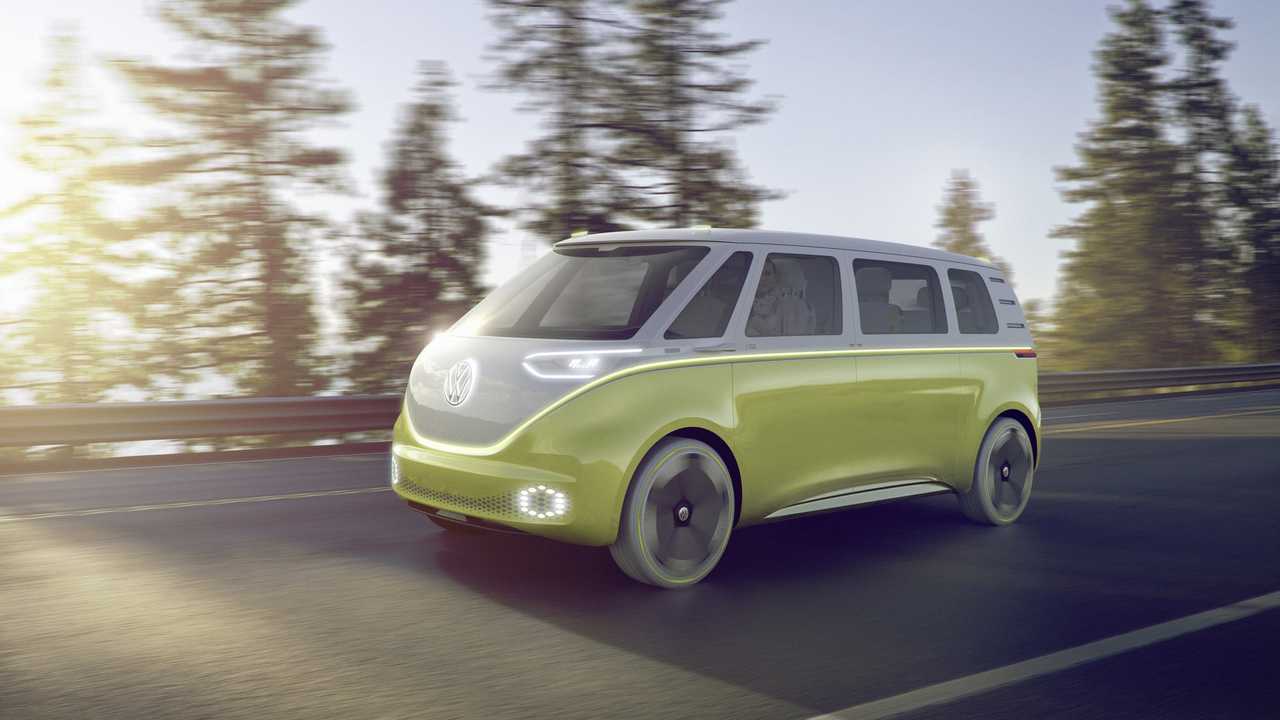 The EV van will be offered in passenger and cargo variants.

First came Bulli, then came Budd-e, and lastly, we saw I.D. Buzz. But now, finally, after years of teasing, Volkswagen confirms it’ll bring a production version of its Microbus redux to market, and it’ll go on sale in 2022.

The I.D. Buzz will remain true to concept form, with a fully electric powertrain. It’ll ride on Volkswagen’s new scalable MEB architecture that’ll also underpin the I.D. hatchback and I.D. Crozz crossover, and will feature some sort of “highly automated driving” – Level 3 autonomous capabilities, according to VW’s press blast, which you can read below.

Inside, the production I.D. Buzz “will incorporate many design ideas from the concept car, including multi-variable seating [and] interactive connectivity,” says Volkswagen. In the show car, the driver could turn the seat backwards 180 degrees to better interact with rear occupants, and there’s a central infotainment/media hub that can slide between the first and second rows of seats.

The production I.D. Buzz won’t just be a passenger van, either. Volkswagen confirms it’ll build a cargo van version, also using a full-electric powertrain. It’s unclear if the cargo variant will also arrive in 2022 alongside the passenger van.

Of course, 2022 is still a long time from now, so plans could change. For now, we’re just stoked that, after years of teasing, Volkswagen is finally bringing the bus back. Scroll down for more information in VW’s press release.

Pebble Beach, California – At the Detroit Show in early 2017, Volkswagen showed the I.D. BUZZ concept car, a fully electric vehicle that taps in to the spirit and vibe that made the VW Microbus such an iconic vehicle — whether with Hippies and families in the Sixties or Surfer Dudes and Van Lifers today.

Now, Volkswagen has taken the bold decision to put the Volkswagen I.D. BUZZ concept car into production and Volkswagen’s CEO of the North American Region, Hinrich J. Woebcken is happy to welcome the car to NorthAmerica. The Chairmen of the Boards of Management of the Volkswagen and Volkswagen Commercial Vehicles brands, Dr Herbert Diess and Dr Eckhard Scholz, announced the decision today at one of the most prestigious automotive events in the world — the Pebble Beach Concours d’Elegance in California.

Within the framework of further development, Volkswagen has also set a launch date for the I.D. BUZZ. The vehicle will arrive at dealerships in 2022, after the compact four-door I.D. makes its debut. With the I.D. BUZZ, Volkswagen is mainly targeting markets in North America, Europe and China.

"After the presentations at the global motor shows in Detroit and Geneva, we received a large number of letters and emails from customers who said, 'please build this car’,” Volkswagen CEO Dr Herbert Diess said in Pebble Beach. The Board of Management chose Pebble Beach as the location to make its announcement because, as Diess explained: "The Microbus has long been part of the California lifestyle. Now we're bringing it back by reinventing it as an electric vehicle."

Just like the concept car that was shown in Detroit, the production model will also have its batteries mounted in the vehicle floor. Because the electric drive components — electric motor, power electronics, and such — don't take up much space, the vehicle has a long wheelbase with short overhangs, allowing for a massively spacious interior and great proportions. "The vehicle looks like a compact commercial van on the outside, even though it offers the generous interior space of a large SUV," Diess explained.

CEO of the North American Region, Volkswagen, Hinrich J. Woebcken added: “We are delighted that our parent company has taken the decision to produce the I.D. BUZZ. This vehicle is the perfect balance between emotion, usability and sustainability, while also showcasing our technological leadership. The high seating position, cargo capacity, overall versatility and all-wheel drive option packaged into such an appealing design is just what our customers want from us. And it’s the perfect fit for the zero-emissions American lifestyle.”

The I.D. BUZZ won’t just be a passenger vehicle. Just like the classic T2, the I.D. BUZZ will both haul people and haul freight. "Along with a minibus version, we'll also be offering an I.D. BUZZ CARGO variant for zero- emissions delivery of goods,” said Volkswagen Commercial Vehicles CEO Dr Eckhard Scholz. "With Level 3 autonomous capability, this is an ideal concept for an electric van, particularly for delivering packages and goods to the inner cities."

Although Volkswagen's oldest and newest Microbuses will be separated by more than seven decades when the new model is launched, the I.D. BUZZ undoubtedly has the original's genes, as it offers maximum utilization of space on the footprint of a mid-size passenger car. Based on the new all-electric architecture, the production version of the I.D. BUZZ will incorporate many design ideas from the concept car, including multi- variable seating, interactive connectivity and highly automated driving.