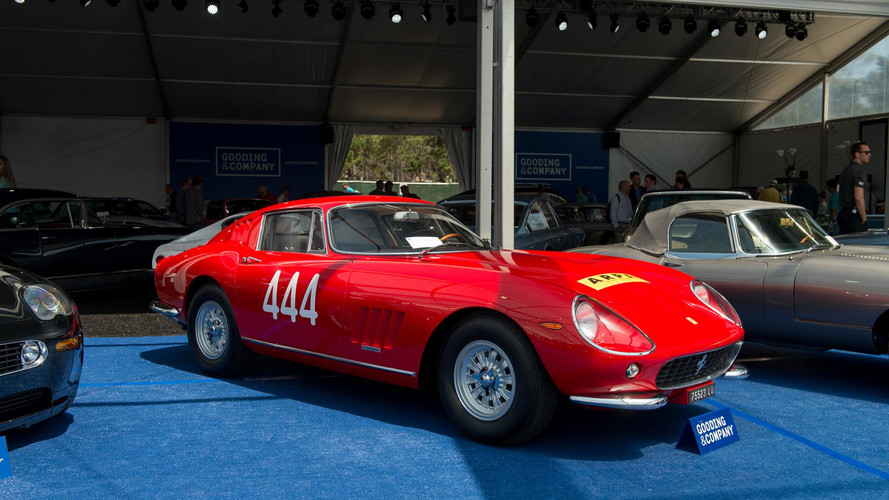 Which rare vehicle sold for more a 1970 Porsche 917K with fantastic provenance or one of 12 examples of the Ferrari 275 GTB/C?

Gooding and Company will auction 136 vehicles, including one motorcycle, during the firm’s upcoming Monterey sale at the Pebble Beach Equestrian Center. The lots start crossing the block at 6:00 PM local time on August 18. However, the auction house has been previewing the vehicles since August 16, and Motor1’s photographer was able to snap some shots of them before the sale.

More Stories About Vehicles For Sale In Monterey From Gooding And Co.:

Gooding and Co. expects a 1970 Porsche 917K to be its top seller at the auction with an estimated sale price of $13 million and $16 million. The vehicle has amazing provenance, including use as a camera car in the film Le Mans and leading the funeral procession for owner Jo Siffert.

In a very close second place, the auction house believes that a 1966 Ferrari 275 GTB/C Competition could go for $12 million to $16 million. The coupe is one of just 12 in existence. The car’s history includes multiple racing victories from 1966 to 1970, and it comes with an original set of aluminum Borani wire wheels.

UPDATE: The rare 1966 Ferrari 275 GTB/C Competition sold within the higher portion of its estimate for a final price of $14.52 million.

While not likely to bring quite as much, a 1954 Aston Martin DB2/4 Drophead Coupe is an incredibly gorgeous and just one of two that exist in Bertone’s convertible body. It’s an absolute stunner, and Gooding and Co. expects the roadster to sell for $1.3 million to $1.6 million.

Looking to spend $1 million to $1.3 million on a dirty 1955 Mercedes-Benz 300SL? Gooding and Co. is selling one with its entire history of ownership within one family. It includes the original purchase paperwork and has 16,300 miles on the odometer. Making the coupe more special, this is a unique factory color combination of a green exterior and light brown leather cabin.

On the other end of the spectrum both in terms of price and functionality, Gooding and Co. is auctioning a 1952 Alfa Romeo 1900 M AR 51 ‘Matta’ military vehicle. In essence, it’s an Italian Jeep and carries an estimated sale price of $45,000 to $55,000. Alfa built around 2,000 of these as reconnaissance vehicles for the Italian military.

UPDATE: The off-road Alfa Romeo beat expectations and sold for $67,100.

Motor1 will cover the highlights of Monterey Car Week’s auctions. Expect more stories of rare vehicles selling for insane prices throughout the weekend.