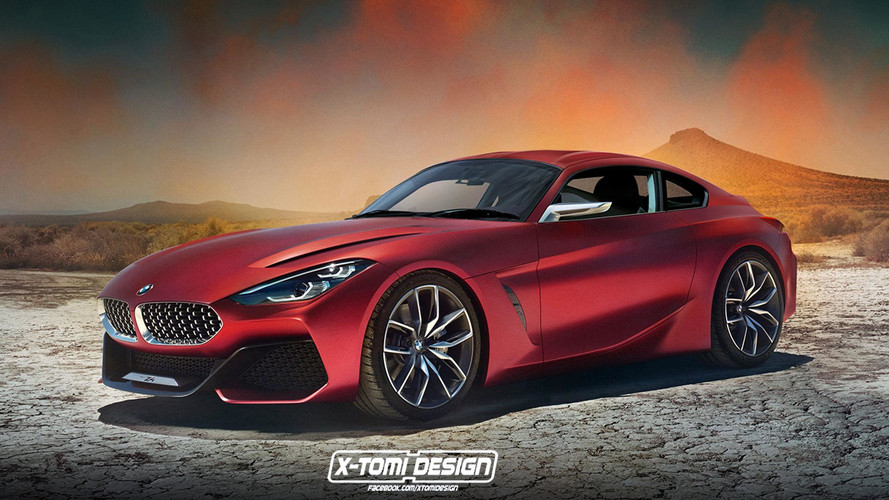 Too bad it will never happen...

BMW debuted its handsome new Z4 concept at the Pebble Beach Concours just yesterday, but already artists have gone to work on imaging the hot roadster wearing something other than a removable top. One rendering artist in particular, X Tomi Design, has imagined the BMW Z4 concept with a sharp fixed roof.

For what it’s worth, BMW has already made it perfectly clear that it won’t build a Z4 with a metal roof. The only hard-top version that you’ll be able to buy will come with a Toyota badge and a Supra nameplate. Nevertheless, the concept rendered here paints a pretty stunning picture.

All of the same dramatic design cues have been carried over, including the mesh kidney grille, the vertically oriented headlights, and the sharp M-style wheels. The addition of a fixed roof gives the concept a much sportier look overall, and a new matte red finish does the body some added justice.

"The BMW Concept Z4 expresses the new BMW design language from all perspectives and in all details," said Adrian van Hooydonk, Senior Vice President BMW Group Design. "From the dynamic- looking front to the striking flanks to the clean-cut tail end: a few lines and the subtle interplay between surfaces are enough to generate a sense of power and emotion."

Power options for the prosed BMW Z4 have yet to be confirmed, but leaked documents suggest that the roadster will come with an entry-level four-cylinder engine good for 195 horsepower (145 kilowatts), a more powerful version producing 248 hp (185 kW), and an inline-six producing 335 hp (250 kW). Z4 buyers will get to choose between automatic and manual, while Toyota Supra buyers may be dealt with an automatic gearbox only.