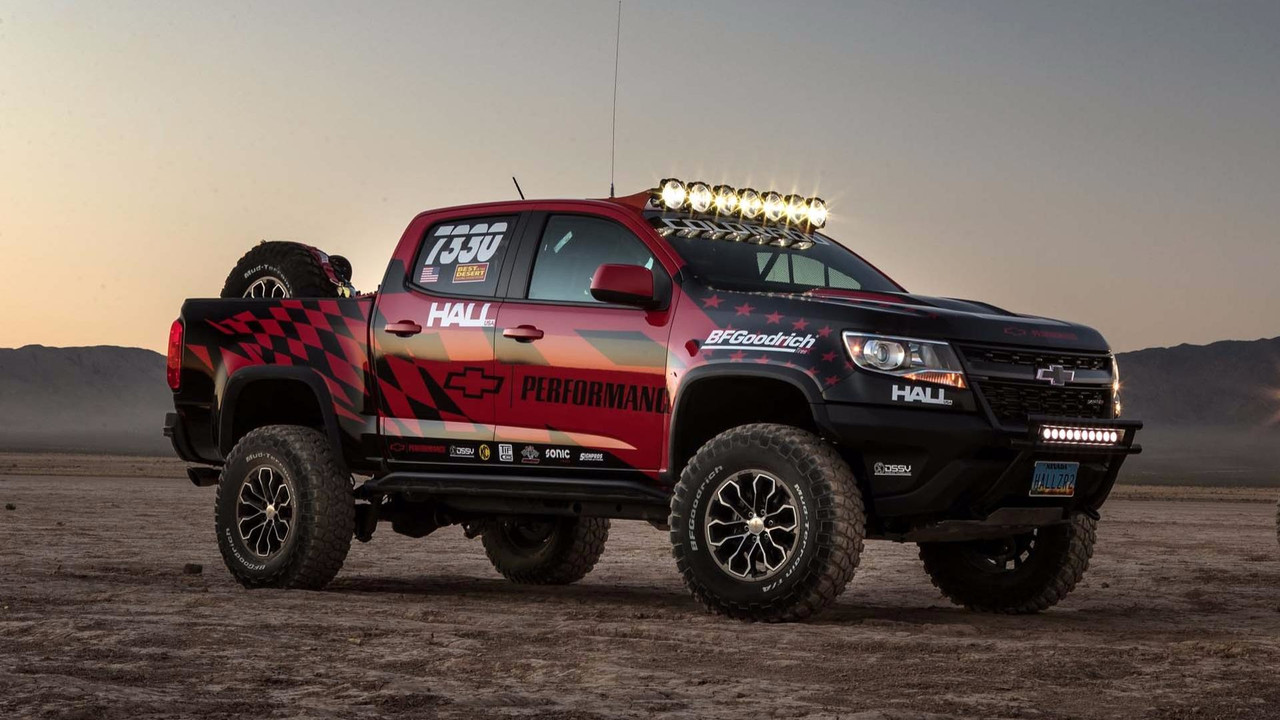 The truck is completely stock, except for all the modified parts.

Over 350 off-roaders will depart Las Vegas Friday morning for the 550-mile Vegas to Reno race, spanning varying degrees of Nevada terrain that includes everything from sand and dry lake beds to 8,000-foot mountain passes. Among the vehicles will be a 2017 Chevrolet Colorado ZR2 driven by Chad Hall from Hall Racing, competing in the stock production class for mid-size trucks and sport-utility vehicles.

Of course, stock means something a bit different in the racing world, because safety is first and foremost. Hall’s ZR2 is fitted with a roll cage, racing seats, and safety harnesses, and it also runs a bank of powerful off-road lights for proper visibility at night. The truck also incorporates a two-way radio, a GPS system, and because it’s tough to find a gas station in the Nevada desert, there’s a 44-gallon racing fuel tank.

Chevrolet says the truck runs the stock 3.6-liter V6 engine, which is good for a not-insignificant 308 horsepower. It also runs the stock eight-speed automatic, sending power to all four wheels supported by a modified version of the truck’s Multimatic DSSV dampers. We don't think that necessarily falls under mandated safety gear upgrades.

Beyond that, Chevrolet is also using the truck as a testbed for performance parts that could be available in the future for ZR2 and standard Colorado owners. As to exactly what those parts are, Chevrolet is mum except to say they are components “intended to take the already-exceptional off-road capability of the Colorado to the next level.” So yeah, we won’t say this “stock” truck is a ringer, but it's not something you can go down to your local Chevy dealer and by, either.

Whatever those upgraded components are, we know from personal experience that the Colorado ZR2 is already a capable machine in true stock trim. Having put the off-roader through its paces back in May, we found the ride to be surprisingly compliant on-road, while offering exceptional poise on everything from muddy trails to full-on rock climbing.

Hall Racing has a rich history in the world of off-road racing, so if the ZR2 passes this test – albeit in not-quite stock format – Chevrolet will have certainly earned some bragging rights.

“Vegas to Reno,” known as “the longest off-road race in the United States,” begins at 9:30 a.m. on Friday in Las Vegas and ends at various times on Saturday morning, August 19, in Reno, Nevada. More than 350 contestants are expected to participate this year’s 550-mile race.

The course encompasses a wide array of grueling terrain, from silty desert wallows, to dry lake beds and mountain passes as high as 8,000 ft. above sea level.

Entered in class 7300, which comprises stock production mid-sized pick-ups and SUVs, Hall Racing’s modifications to their ZR2 include sanctioning body-mandated safety items such as a roll cage, a 44-gallon racing fuel tank and racing seats with safety harnesses. KC HiLites racing lights, two-way radios and a GPS system have also been added.

In addition to Hall Racing’s alterations, this crew cab ZR2 acts a testbed for Chevy Performance and hints at a range of potential parts to be offered for ZR2 as well as the standard Colorado.

“The components being tested on this truck are ultimately intended to take the already-exceptional off-road capability of the Colorado to the next level,” said Russ O’Blenes, director, Performance Variants, Parts and Motorsports for General Motors.

“Racing them allows us to quickly understand their performance attributes and reliability in the extreme environment of off-road racing, ensuring the highest performing components for Colorado customers.”

Hall Racing, the winningest family of off-road racers in the legendary Baja 1000, has a long history of racing with General Motors production-based vehicles in both Best in the Desert and SCORE desert series.

“The Colorado ZR2 is one of the most capable production platforms we’ve used as a foundation for our racing program,” said Chad Hall. “The base Colorado is strong and robust with the expected advantages of a midsize package. ZR2 adds great technology, like the Multimatic DSSVTM dampers and the front and rear locking differentials that are vital to stock class desert racing.”

The 2018 Colorado ZR2 is effectively a segment of one, combining the nimbleness and maneuverability of a midsize pickup with a host of new off-road features and the most off-road technology of any vehicle in its segment.

As with all Chevrolet trucks, the Colorado ZR2 is built with durability in mind, including a fully boxed frame, roll-formed high-strength steel bed and Duralife brake rotors.