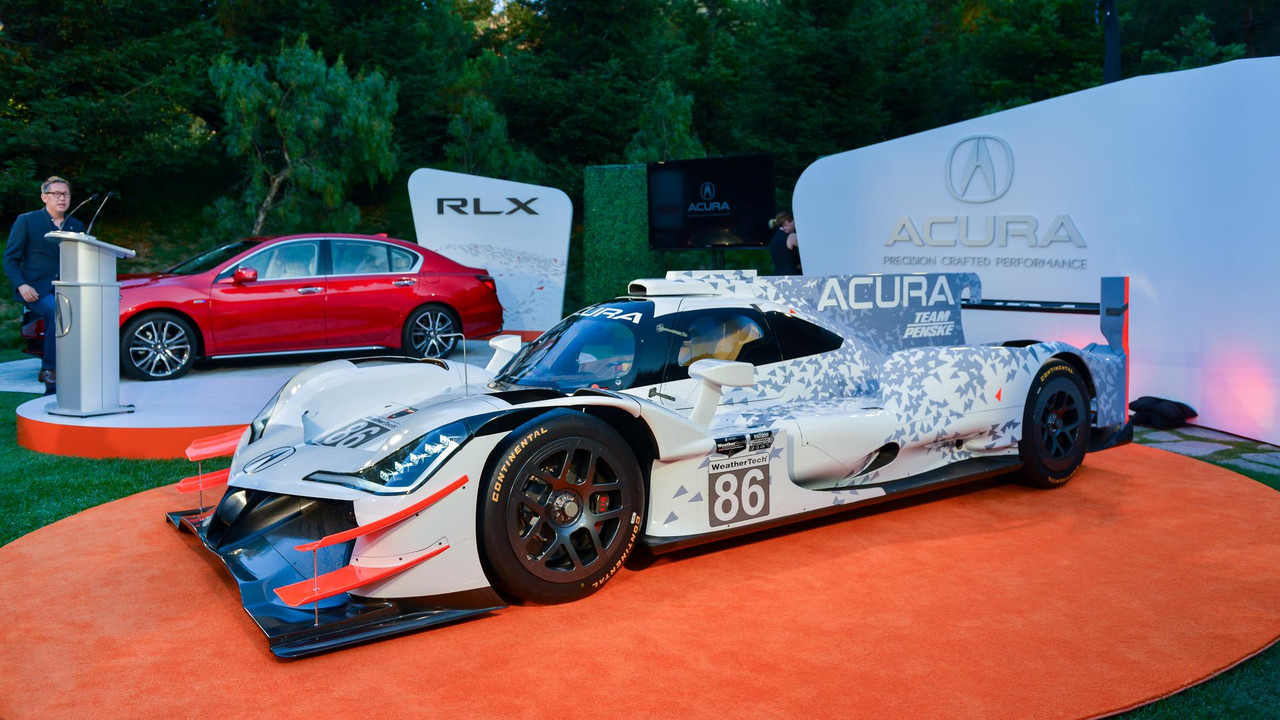 Team Penske will campaign two of them, and the driver lineup will include former Indy 500 winner Juan Pablo Montoya.

Acura will return to prototype racing in 2018 with the new ARX-05 in the WeatherTech SportsCar Championship’s Daytona Prototype International class. The machine will make its competition debut at the Rolex 24 at Daytona in January. However, the company just revealed the sharp-edged vehicle to the public at The Quail, A Motorsports Gathering, during Monterey Car Week.

The DPi class rules give teams freedom for creating the bodywork’s design but mandates that they use one of four approved chassis. For the ARX-05, Acura Global Creative Director Dave Marek came up with the initial shape, and then the team started tweaking it in the wind tunnel. “The design continued to be refined throughout the testing and evaluation process, until we came up with a final treatment that met our performance goals while maintaining Acura styling cues,” he said in the racer’s announcement.

More News About the Acura ARX-05:

The ARX-05 has a striking front end. A fixed wing runs between the fenders, and there’s a pointed nose underneath. Visually, the effect creates two channels that flow down the entire body. Upward sweeping versions of Acura’s Jewel Eye LED headlights are on each corner. The prominent fin dominates the design in profile, and a wing stretches across the entire rear.

Power comes from a 3.5-liter biturbo V6. At its basic core, the mill is from the same family of engines as the ones available in the MDX, RDX, TLX, and RLX.

The ARX-05 will have quite a team supporting it because Team Penske will campaign a pair of them next season. Former Indy 500 winner Juan Pablo Montoya and 2016 IMSA Prototype champion Dane Cameron have already signed on to race one of the machines. Team Penske hasn’t announced the other driver duo yet.

“It’s definitely a challenge, and it’s going to be a lot of fun to develop a new car with Acura,” Montoya told our partners at Motorsport. “I’m excited to start the testing of the ARX-05 next week. Team Penske started its winning tradition in sports cars and it’s going to be cool to be a part of a new chapter with the team.”

The Acura ARX-05 (Acura Racing eXperimental, generation 5) is the latest in a line of endurance prototypes to be fielded by the brand dating to 1991, just five years after the 1986 launch of the Acura marque. Based on the very successful ORECA 07 chassis, the new ARX-05 prototype showcases Acura-specific bodywork and design features, including Acura’s signature Jewel Eye™ headlights, and utilizes the race-proven AR35TT twin-turbocharged engine, based on the production 3.5-liter V-6 that powers the Acura MDX, RDX, TLX and RLX models.

“At Acura, Precision Crafted Performance is at the heart of everything we do.” said Jon Ikeda, Acura vice-president and general manager. “Whether it is our production cars or a prototype race car, if you want to be a performance brand you need to perform.”

The multi-year DPi program will be administered by Honda Performance Development (HPD), the racing arm for both Acura Motorsports and Honda Racing in North America. The competition debut of the Team Penske Acura prototypes will take place at the season-opening Rolex 24 in January, 2018. One of the team’s two ARX-05 entries will be piloted by the legendary Juan Pablo Montoya along with sports car champion Dane Cameron. The second driver pairing will be announced at a later date.

“Right from the start, Acura has raced – and done so successfully,” said Art St. Cyr, President of HPD and Acura Motorsports. “We’ve won with the Acura Integra Type R, the RSX, the first-generation NSX and with the Le Mans prototypes. Most recently, we’ve won with the new Acura NSX GT3. The ARX-05 is our fifth-generation prototype, and we expect great things from our partnership with Team Penske.”

DPi rules require manufacturers to use one of four approved prototype chassis, fitted with IMSA-homologated, manufacturer-designed and branded bodywork and engines. In the case of the ARX-05, the bodywork was developed by a team led by Acura Global Creative Director Dave Marek.

“We created a variety of initial sketches, then pared those down a handful of potential designs. Next came aero and wind tunnel model testing, and time for the engineers to have their say,” Marek recounted. “The design continued to be refined throughout the testing and evaluation process, until we came up with a final treatment that met our performance goals while maintaining Acura styling cues. It’s been an exciting process.”

The Acura ARX-05 will add to a rich legacy of Acura sports car racing successes, including the 1991-93 IMSA Camel Lights manufacturer and driver championships; 50 IMSA and American Le Mans Series class or overall race victories (through Watkins Glen 2017); and the 2009 American Le Mans Series manufacturer, driver and team championships, in both the LMP1 and LMP2 classes.

Based on the “J35” family of engines found in Acura MDX, RDX, TLX and RLX production vehicles, the Acura AR35TT engine has powered class winners at the 12 Hours of Sebring (2011-13); the 24 Hours of Le Mans and LMP2 World Endurance Championship (2012).  The engine also powered entries to American Le Mans Series LMP2 titles in 2012-13; and the overall winners at the Rolex 24, 12 Hours of Sebring and Petit Le Mans in 2016.

Acura Motorsports currently campaigns the Acura NSX GT3 in the IMSA GTD category with Michael Shank Racing – where it has already won at Detroit and Watkins Glen this season – as well as with Real Time Racing in the Pirelli World Challenge GT division.

Following today’s official unveiling, the Acura ARX-05 will also be on display at the Rolex Monterey Motorsports Reunion (August 19) and on the Concept Lawn at the Pebble Beach Concours d’Elegance (August 20).

HPD was founded in 1993 to spearhead American Honda’s entry into Indy car racing.  No other manufacturer has matched the company’s success in Indy cars, which includes 225 race victories, 15 drivers’ championships, six competitive manufacturers’ championships and 12 Indianapolis 500 victories since 2004.

HPD, Acura and Honda have a history of success in endurance sports car racing, with more than 100 prototype victories since 1991, including either class or overall victories at the Rolex 24, 12 Hours of Sebring, 24 Hours of Le Mans and Petit Le Mans. Acura and HPD swept all prototype championships in the 2009 American Le Mans Series; and won the North American Endurance Championship manufacturers’ title in 2016. Prior to the founding of HPD in 1993, Acura won 25 races and three consecutive IMSA Camel Lights Championships from 1991-93.

HPD’s Acura and Honda engines have recorded 78 race wins at endurance sports car races around the world, with 70 of those victories coming in the HPD-developed line of sports prototype cars.  For more information about HPD and the company’s racing product lines, please visit http://hpd.honda.com.

Team Penske is one of the most successful teams in the history of professional sports and celebrated its 50th Anniversary in 2016.  Cars owned and prepared by Team Penske have produced more than 450 major race wins, more than 520 pole positions and 29 national championships across open-wheel, stock car and sports car racing competition.  In its storied history, the team has also earned 16 Indianapolis 500 victories, two Daytona 500 championships, a Formula One win and overall victories in the 24 Hours of Daytona and 12 Hours of Sebring.  Team Penske currently competes in the Verizon IndyCar Series, the Monster Energy NASCAR Cup Series, and NASCAR XFINITY Series.  The team also races in the Virgin Australia Supercars Championship, in a partnership with Dick Johnson Racing, as DJR Team Penske.  For more information about Team Penske, please visit: www.teampenske.com.