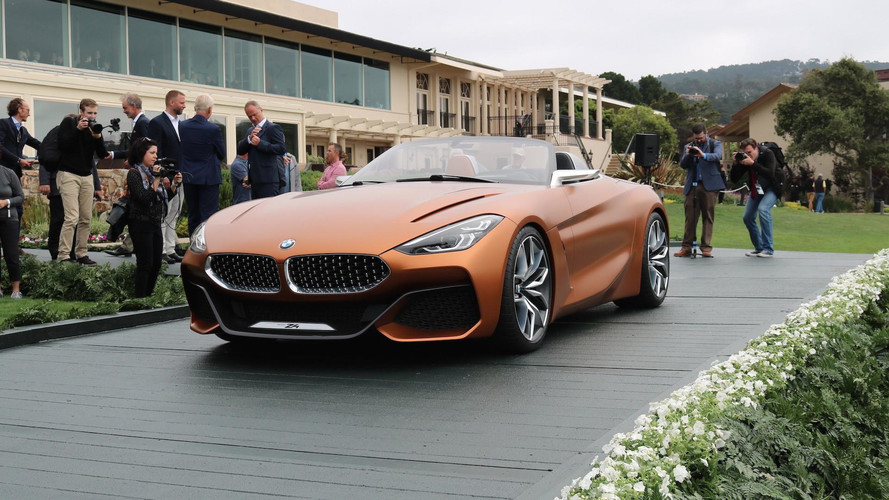 Ushers in new design language for the BMW brand.

“It is giving you a hint, a very close hint, of what the production car will look like next year,” says BMW global design chief Adrian van Hooydonk.

That car, of course, will be the new Z4 roadster, a sports car co-developed with Toyota that’s previewed by this striking concept. It’s a long, low, wide design, with big air intakes and massive wheels hinting at its performance focus. In fact, says van Hooydonk, “the car has become a lot more dynamic than any Z4” before it.

Up front, a new headlight design and a wider grille shape redefine the nose of BMW roadsters: “Overall we have a completely new facial expression,” says van Hooydonk. And moving to the side, note that the clamshell hood’s shutline runs into a body crease that stretches toward the rear of the car. “There is really only one line that matters,” van Hooydonk explains, with a “very interesting play, we believe, between sharp lines and soft body areas."

Moving inside, it’s notable that the driver’s side is finished in black while the left-hand side of the interior is finished in tan. Van Hooydonk says that’s a way to emphasize that this car is aimed at performance driving. “The cockpit is really center around the driver, both in geometry and in color,” he says. There’s an automatic transmission shifter in the console – a bummer for anyone hoping for a stick-shift Z4 – and a racy steering wheel with a red “race” button on its rim.

This concept car – along with the 8 Series concept – is our first look at BMW’s next generation of styling cues. Van Hooydonk says one of the big goals with the new design language was making it “cleaner.” Where car design had for several years been adding ever more lines and creases, the new BMW language will have fewer of them. He says that BMW realized it could still create striking cars but without using as many lines.

“The form language will become cleaner, more precise,” he says.

He also notes that previously, BMW would wait a long time to introduce new styling cues, often as long as a decade. Now, he says, designers try to push out new design language as soon as possible on new vehicles.

Van Hooydonk – who has spent his entire car-design career at BMW since starting in 1992 – draws a distinction between concepts like this, which are a realistic impression of an upcoming vehicle, and BMW’s “Vision” concepts, which give a much more fanciful, forward-looking idea of how BMW could tackle future design issues. (See last year’sVision Next 100 concept, for instance.)

As a result, what you see here is very close to what you’ll see in a BMW showroom in 2018. BMW says it will introduce new models at the Frankfurt, Los Angeles, and Detroit auto shows, so expect far more news to come on this striking roadster and the 8 Series.

“Those cars [the Z4 and 8 Series concepts] will be product variants next year,” confirms BMW North America CEO Bernhard Kuhnt. “They are just around the corner.”