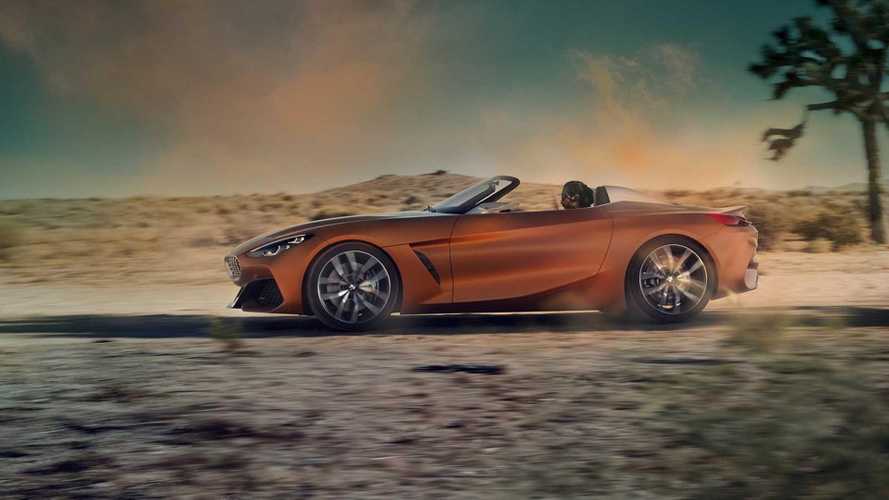 Today’s the big day – BMW will reveal its Z4 concept at the Pebble Beach Concourse d’Elegance, but you don’t have to wait until the official premiere to see it. Here are the first fully revealing images of the study, leaked by Bimmerfile and brought to our attention by Autoblog.nl.

Let’s start with the good news – it looks simply amazing! The car gives us a different take on BMW’s evolutionary design, but features sharper, more dynamic, and sculptured lines with super aggressive front end, and nearly perfect proportions (why not longer hood and front overhang?). What we like especially are the sleek headlights and the massive air intakes in the sporty front bumper. Those 20-inch two-tone, five twin-spoke wheels are a perfect match for the muscular fenders. The rear end is dominated by wide vertical taillights and an attractive diffuser.

The interior is pretty as well. It retains the basic layout of BMW’s current production models, but features minimalistic design. Interestingly, it’s a two-tone cabin – the driver’s seat is covered in black Alcantara, as well as half of the dashboard, while the passenger seat is finished in exterior-matching orange color.

The center console is home of a big tablet-like display and the climate controls are located just below it – in typical BMW fashion. The instrument cluster appears to be fully digital and another small display is mounted on the steering wheel – probably displaying information about speed, lap times, etc.

We have some bad news, as well. This is still a study and probably some of the coolest design features won’t be seen in the production model. Speaking of which, we expect to see the final production version of the roadster in the first half of 2018, most likely in Geneva.

Sales should start shortly after with prices remaining close to the price range of the current model. A lineup of 2.0- and 3.0-liter turbocharged units will be available, offered with either a six-speed manual gearbox or an eight-speed automatic.