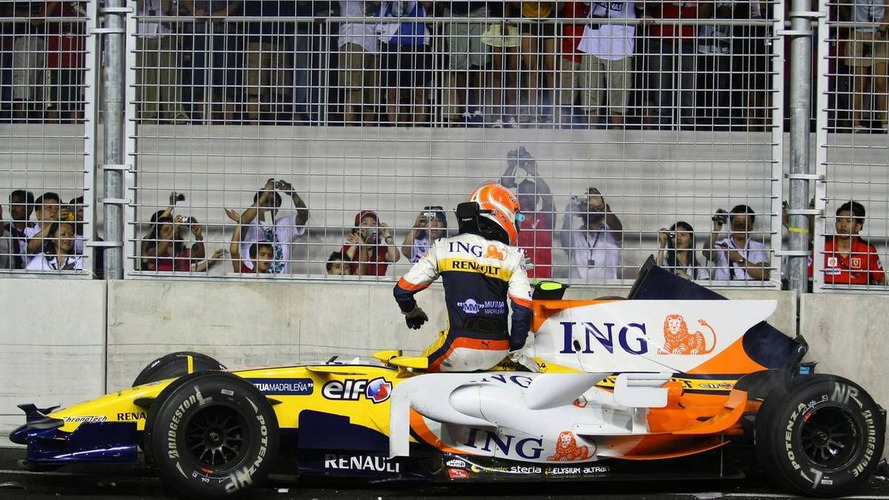 Renault escaped Monday's 'crash-gate' hearing with a two-year suspended disqualification, but Flavio Briatore was banned from motor sport for life.

Renault escaped Monday's 'crash-gate' hearing with a two-year suspended disqualification, but Flavio Briatore was banned from motor sport for life.

The French team attended the Paris meeting of the World Motor Sport Council in fully cooperative mood, admitting the Nelson Piquet crash conspiracy, apologising, and offering to pay for the FIA's investigation and make a "significant contribution" to the governing body's safety projects.

The Council noted the "unparalleled severity" of the incident and said it merits "permanent disqualification from the FIA formula one world championship".

But because of the company's contrition and the ousting of conspirators Briatore and Pat Symonds, the body decided to suspend the ban "until the end of the 2011 season".

"The World Motor Sport Council will only activate this disqualification if Renault F1 is found guilty of a comparable breach during that time," read a statement.

The Council however came down hard on Briatore, who has been forever banned from even attending let alone taking part in any FIA-sanctioned series.

The 59-year-old Italian will also have to wind up his FFBB driver management company, because the FIA said it does "not intend to renew any Superlicense granted to any driver ... associated ... with Mr. Briatore" or any of his companies or associates.

The FIA said it decided to impose such a harsh penalty on Briatore not only because of the "severity of the breach", but also for "continuing to deny his participation in the breach despite all the evidence".

Symonds received the same penalty but for only a five-year period, because he admitted taking part in the conspiracy and, in a written submission to Monday's hearing, said it was to his "eternal regret and shame".

Piquet Jr escaped sanction due to his immunity deal, and the FIA confirmed that Alonso played no part in the conspiracy.

"We fully accept the decision of the Council," Renault F1 president Bernard Rey told the media.

"We apologise unreservedly to the F1 community in relation to this unacceptable behaviour. We will issue further information in the next few days."