Ride in style on your next trip to the park.

The McLaren 570S isn’t exactly the definition of "cheap." The 562-horsepower (419-kilowatt) sports car has an asking price of $188,600 for the coupe, and $208,000 for the Spider. But we’ve found a way you can cut your costs significantly in pursuit of owning the perfect 570S; this particular example costs just $80! Amazing!

Sure, it’s missing a few key components; there is no V8 under the hood, nor is there a function steering wheel, a leather-wrapped interior, or even a radio. What you do get, though, is a single cupholder, a tiny storage compartment und the seat (singular), and a set of so-called "Whisper Wheels" for a smoother ride.

The push car was built by Step2 with a bit of design direction from McLaren, and this particular example comes finished in a signature Ventura Orange finish. I’d spec mine in Mantins Green, personally. In the cabin is a race-inspired flat-bottom steering wheel, which the company says offers "excellent feedback," and out back is a push handle that makes the pint-sized supercar feel like it’s on rails. 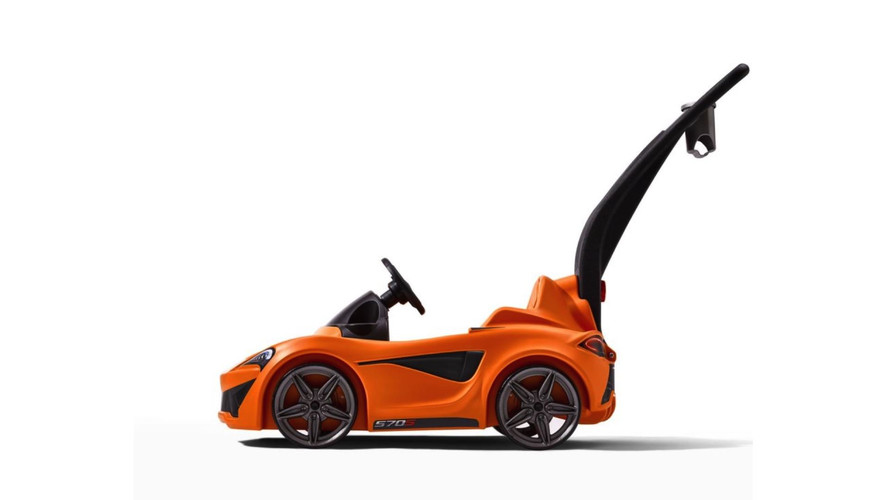 The toy will be available through Amazon beginning in September, and comes with an asking price of just $79.99 – a steep $188,520 discount over the standard model. For those kids (and kids at heart) looking for something a bit more interactive, the company also offers an electric ride-on P1 for a cool $486 (£375 pounds). It comes with functional scissor doors and even an MP3 player and stereo.

Whichever of the two toys your toddler does decide, he or she will undoubtedly be the coolest kid on the playground when they roll up in one of these. 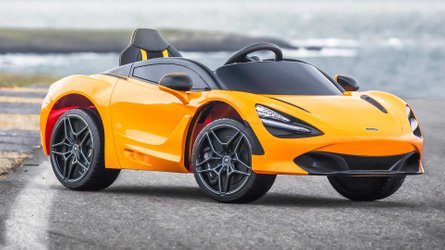 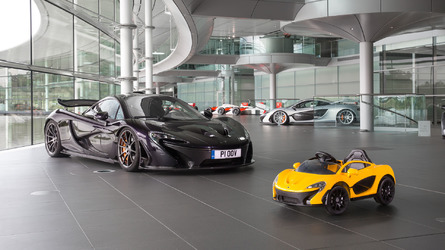 “McLaren represents the pinnacle of supercar performance, design, and racing heritage,” said Chris Quinn, President and CEO of Step2. “The Step2 McLaren 570S Push Sports Car takes our iconic children’s push car to a thrilling new level that we hope serves to fuel children’s imagination while engaging parents to spend more time with their children leveraging the very best Step2 has to offer.”

The luxury push car will feature the innovative styling of the McLaren 570S sports car plus Whisper Wheels™ and an easy-fold handle for quick storage and transport. A large storage area under the seat, multiple cup holders and a pretend steering wheel with electronic sounds provide the optimum riding experience for mini racers. McLaren Automotive is the British manufacturer of hand-built luxury, sports, and supercars. McLaren Automotive launched its first car, the 12C, in 2011. The Sports Series family, which includes the 570S, was launched in mid-2015 as the most accessible range of McLaren cars, and by the end of 2016, the company had sold over 10,000 supercars.

In 2016, it sold nearly 3,300 cars, with the McLaren 570S being the most popular choice of its discerning customers. “McLaren Automotive is pleased to appoint Step2 to our growing Official Licensee programme,” said Hayley Robinson, Licensing Manager at McLaren Automotive. “Step2 is highly regarded in the toy industry, and we are confident they will be a great addition to our licensed toy category. By appointing rights for the McLaren 570S Sports car, this offers a great attainable product for young fans to buy into the McLaren brand at a very early age.”

The McLaren 570S Push Sports Car joins a robust line of Step2 push cars including the iconic Push Around Buggy, Whisper Ride Cruiser and the recently released Push Around Buggy GT. PRESS RELEASE The Step2 McLaren 570S Push Sports Car will be available for purchase in the fall of 2017 on Amazon.com and Step2.com with a targeted MSRP of $79.99. The line will expand in spring of 2018, driving McLaren into dreamland.