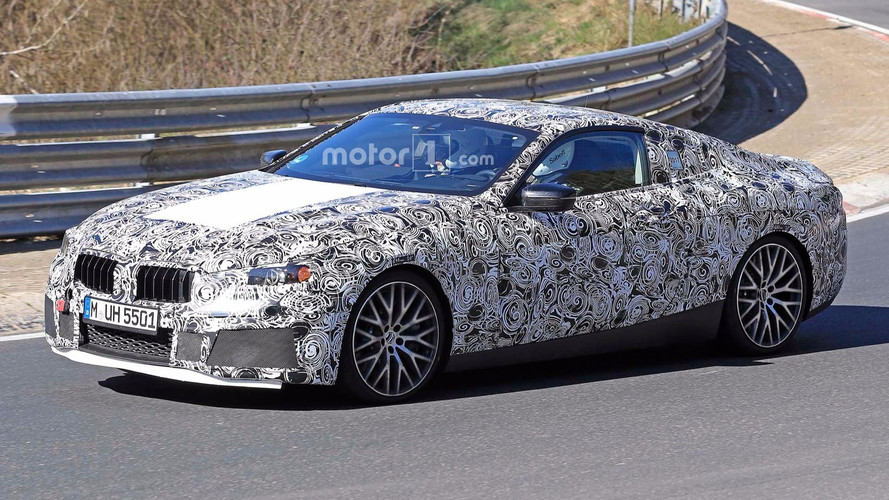 The flagship performance coupe could have well over 600 horsepower.

The latest round of BMW spy photos from the Nürburgring show not one, but two performance variants of the highly anticipated 8 Series coupe from Munich. We’ve seen the M8 and its quad-tipped exhaust previously, but the second car with the trapezoid exhaust outlets and exposed lower side trim is believed to be an 8 Series M-package version, which will seek to find balance between the standard grand tourer and the hardcore M8.

“The conception and development of the standard BMW 8 Series and the M model run in parallel,” said M Division President Frank Van Meel. “The future BMW M8 will build on the genes of the 8 Series and augment its DNA with added track ability and generous extra portions of dynamic sharpness, precision and agility. It all flows into a driving experience that bears the familiar BMW M hallmarks and satisfies our customers’ most exacting requirements.”

As far as specifics on those genes, much is still unknown. Current thinking suggests the M8 will borrow the 4.4-liter biturbo V8 destined for the next M5, sending its power to all four wheels through the manufacturer’s M xDrive system. At the very least a V8 is likely to be found in the standard 8 Series M-Package, but talk of V12 power still churns in the rumor mill. Regardless of the engine, the range-topping M8 will likely have more than 600 horsepower, which is the figure expected to come from the next M5. Naturally it will be paired with upgraded brakes, suspension, and all the other wizardry that takes place behind the closed doors of BMW’s M division.

BMW announced the M8 GTE would have its endurance racing debut in January for Rolex 24 Hours at Daytona. While the automaker hasn’t given an official reveal date for the production 8 Series, we expect it to happen sometime this fall with sales beginning the second half of 2018. The M8 will likely follow for 2019.

Pirelli and the BMW M8
Photo by: Automedia
++