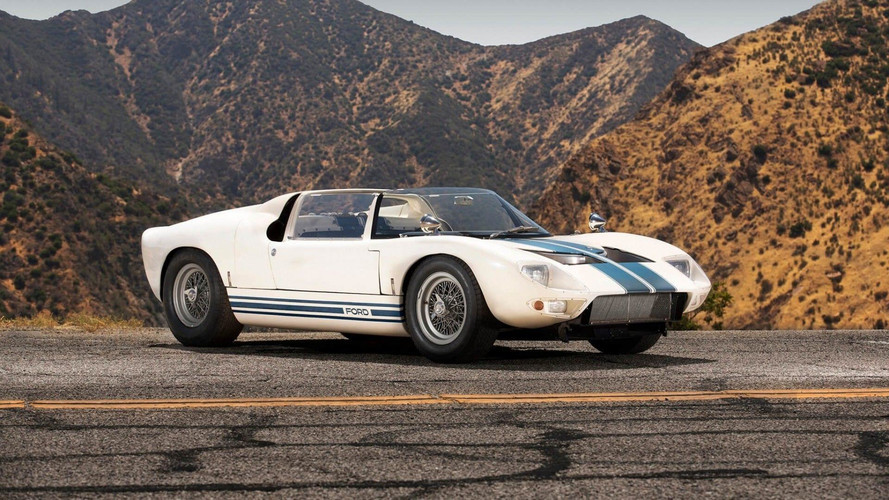 It's the first Ford GT40 roadster ever built, and it's for sale.

The new Ford GT delivers 647 horsepower (482 kilowatts) and comes with a whopping price tag of $500,000 – but not even it can compare to the significance of the vehicle pictured here. This is the first Ford GT40 Roadster ever built, and the last one to remain completely original from the factory. Now it's up for sale.

Available through Classic Driver by way of Girardo & Co., the 1965 GT40 wears an off-white paint job with an appropriate set of blue racing stripes down the middle. It’s one of just six roadster prototypes ever built, and the only example that has kept its originality, including its original 4.2-liter V8. It was driven by F1 world champion Jim Clark, and inspected and documented by GT40 expert Ronnie Spain, further cementing its heritage.

Assembly of the GT40 in question kicked off on November 2nd, 1964. It wears the chassis number 108 opposed to the "P" designation found on most production models, and is one of just 12 early prototypes to do so. The chassis is made entirely out of steel, and completed construction in March of 1965.

Along with the off-white and blue exterior, the GT40 wears a set of Borrani wire wheels, 6.5 inches at the front, and eight inches at the rear, wrapped in Goodyear racing tires. The car was tested extensively at Silverstone circuit following its completion, driven by Sir John Whitmore, 1961 British Touring Car champion, and Richard 'Dickie' Attwood, a 1970 Le Mans winner.

The car was later handed over to Shelby American for a few minor repairs, and specifically noted to be used for "temporary importation for test purposes." Eventually the GT40 was brought into the U.S. on a full time basis, and used extensively on the show circuit, making its debut at events like the South Course Concours d’Elegance in Newport Beach, California, and the Detroit Auto Show.

The car was sold in 1969 to its first private owner, George Sawyer of Detroit, and changed hands a number of times following. The GT40 was eventually taken into ownership by John McCaws in 1989, who set about commissioning a substantial mechanical refresh, as well as an inspection by Ronnie Spain. Now, the car is looking to change hands once again. The seller, Girardo & Co., doesn’t list a price on its website, but as the old saying goes, if you have to ask…