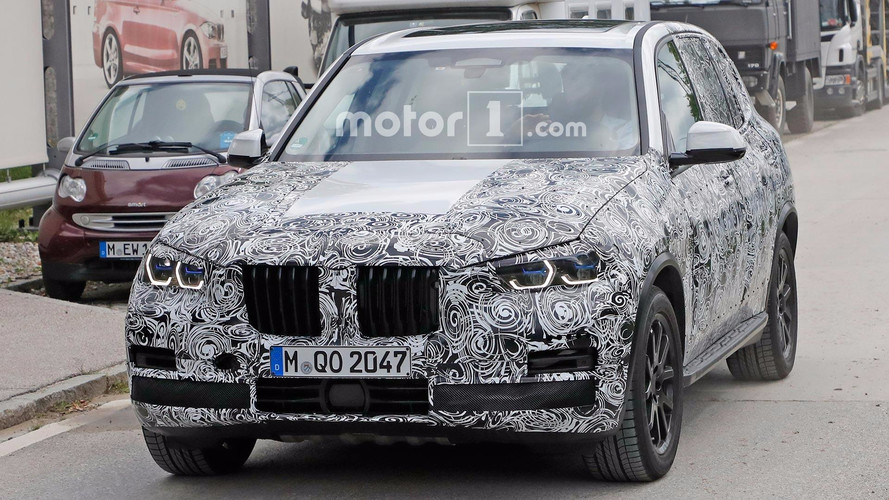 The pieces look like more angular versions of the headlights on the current 5 Series.

The latest spy photos of the next-generation BMW X5 reveal the upcoming luxury crossover's production headlights. They give the front end quite a stylish appearance.

The X5's headlights feature sharp-edged LED running lights. The shape of these details are more like the less jagged pieces on latest 5 Series than the narrow, squinting parts on the upcoming X7. Our spies also believe that the blue details in the center indicate that this one has laser headlights. Compare the trio below.

The rest of the X5 appears to have a strong family resemblance with the X7. Both models feature large kidney grilles and lower fascias that feature big corner intakes. In profile, the X7 is noticeably longer and has a higher roof. Around back, the X5 looks a little more shapely than its big brother, but both of them feature angular tailpipes with integration into the bumper.

There are no photos of the next X5's cabin yet, but the latest 5 Series and 7 Series should be a good preview. Expect a large infotainment screen at the top of the center stack with HVAC vents below it. High-end materials would be available to customers who want to be pampered.

Like the 5 Series, 7 Series, Rolls-Royce Phantom, and X7, the X5 moves to BMW's modular CLAR platform. The new underpinnings make significant use of lightweight materials, which should yield a considerable diet for the new crossover. There are no official powertrain details yet, but the CLAR platform supports BMW's latest engines, ranging from the firm's plug-in hybrid four-cylinder to a biturbo V12. An M variant would likely use the upcoming M5's 4.4-liter biturbo V8.

BMW i Hydrogen NEXT concept
++41