JLR Patents Aero Tricks For Routing Air Along Side Of Vehicle 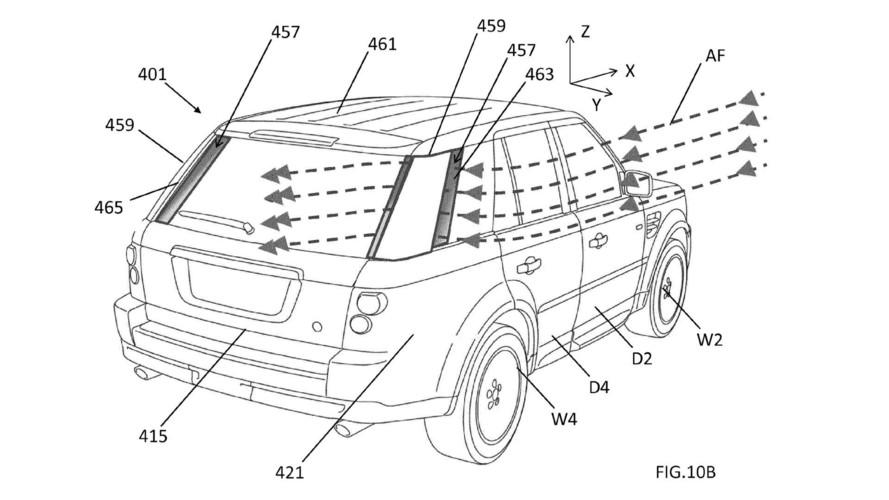 The active side sills that double as running boards are especially cool.

Future vehicles from Jaguar Land Rover could be significantly more aerodynamic because a new patent shows the company’s plan for an extensive collection of tricks for channeling air around the side of the body. With all of these parts in place, the body would produce less drag leading to greater efficiency.

JLR’s bag of tricks starts at a vehicle’s front corners where the bumper would contain deployable vanes. When not in use, the strakes would be flush with the vehicle’s body, but they would extend on the road to clean up the airflow ahead of the front wheel. The devices could also rotate for fine-tuning the aero adjustments.

Further down the body, the patent describes active extending side sills. These pieces would clean up the airflow behind the front tire, and they could also channel air inward towards a rear diffuser, if the model has one. Furthermore, the sills would be strong enough to act as running boards to make getting in and out easier.

JLR also describes two methods of channeling air at the rear of a vehicle. First, the D-pillar could be partially hollow and feature vanes inside. Patent says that these parts could be fixed or adjustable. They would channel air inward and “change the effective shape of the rear of the vehicle to provide a boat-tail effect,” according to the patent. This would reduce aerodynamic drag.

Further down, JLR could add another set of active vanes similar to the ones at the front. Like the units in the D-pillar, they would function to channel air inward.

The automaker filed for the patent on August 5, 2015, but the United States Patent and Trademark Office published the documentation on August 10, 2017. According to JLR, these aerodynamic aids could work together or the company could use just one of them on a vehicle. Given the amount of time since coming up with the idea, we could see these tricks on the road soon.